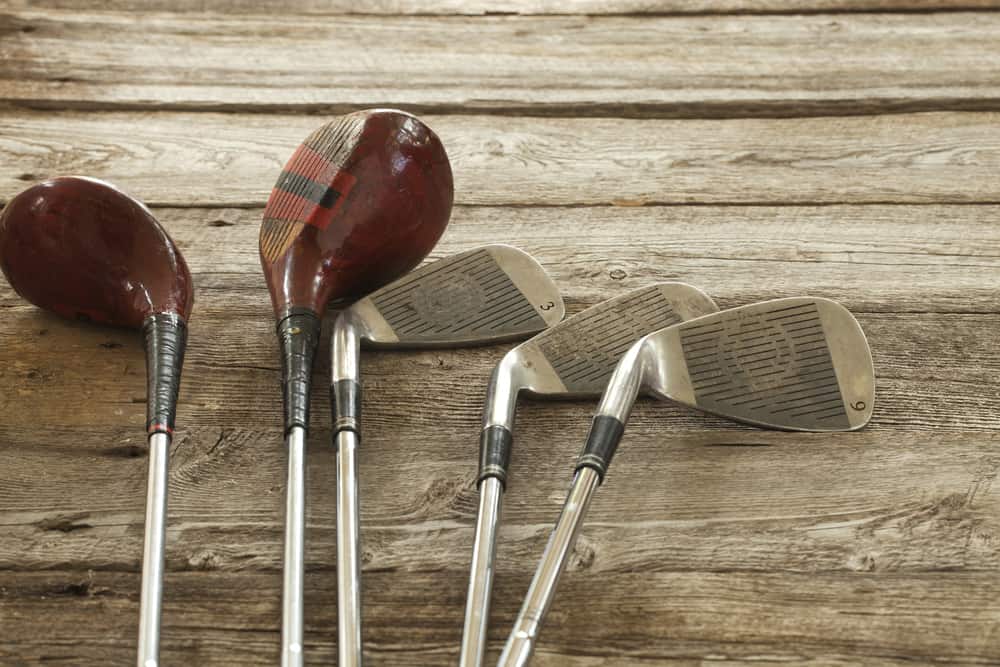 Like cars, wine, and most items, the value of golf clubs can increase with age. In fact, the most expensive golf club, an Andrew Dickson putter, sold for $181,000 at an auction.

At the same time, most individual clubs typically sell for $15 to $20. Do you see where I’m going with this?

Just because something is old does not mean it’s valuable, a common misconception among many people.

So how can you tell if your golf club or one you’re planning on buying is valuable? Read on to learn.

Some well-known brands of antique golf clubs include:

The game of golf has been around for years, but clubs of significant value date back to some specific eras.

For example, clubs from before 1920 fetch a higher price. During this period, hickory wood shafts and steel and wood iron heads were standard in golf manufacturing.

After the 1920s, the game grew popular, and manufacturers made several steel shaft clubs of matching sets.

Clubs from the 1800s fetch a handsome price, especially if they were made by a prominent manufacturer and are in good condition.

Clubs with unusual design features are rare. Their unique features plus rarity make them carry a higher price tag.

Usually, the value automatically increases for products that are hard to come by or only a few are available.

A good example is the Hogan 1-Iron used by Ben Hogan back in the 1950 US Open.

Like most antique items, authenticating golf clubs is not a straightforward matter. It’s often very difficult.

It’s not hard to identify an antique, especially with the guideline we have outlined below on identifying antique golf clubs.

However, precisely dating a club is another matter. Most golf equipment from the 1800s had no patent numbers, rendering it difficult to authenticate.

How do I know if My Golf Clubs Are Antique?

The key to knowing whether or not your golf clubs are antique is to assess them keenly. Antique golf clubs have some unique features. So do the standard ones. Remember, just because a club is old does not mean it’s antique.

Indicators Your Clubs Are Antique

Below are some features unique to antique clubs:

The 1890s was the golden era for golf clubs.

Several fabulous clubs were made in Scotland, the leaders in club design. It’s no wonder that clubs marked Made in Scotland or Made in England are considered more valuable.

Putters and wedges have been tried and tested more than any golf club. They’re specialty clubs revered by many.

Usually, most golfers develop a strong bond with the putters. It’s part of the reason they command a significant value.

Wood is considered an indicator of age. So clubs made from old wood can fetch more money, especially if the necks are thick and covered in string wrapping.

These smooth face iron clubs are hard to come by because, by 1910, they were out of style. For this reason, clubs with no lines, dots, or patterns typically fetch more.

Check that the club is clean and in good condition, maintaining its original condition.

You see, most owners stacked these clubs in a basement or garage where moisture and temperature fluctuations took a toll on them. As a result, the metal underwent rusting and pitting.

Wooden shafts are also susceptible to damage caused by natural elements while in storage. So check that they have no cracks or missing inserts or soleplates.

A complete set of clubs that include the canvas bag is likely unique.

Classic drivers and fairway woods with elaborate cross-hatching are highly desirable to collectors and golf enthusiasts.

It’s not common to find the shaft bends intact as they are easily scuffed, so check for warping or bending.

In the 1890s and before, the shafts of golf clubs were made of wood. By the 1930s, such clubs were no longer available, which is why such clubs can be valuable.

Wood shaft clubs of deep groves, commonly referred to as rakes or waterfalls, are collectors’ favorites.

Indicators a Golf Club is of Low Value

In the early 20th Century, particularly from 1920 to 1940, many people were interested in golf.

During this period, American club makers like Thistle, Bonnie, Baltimore, Hollywood, and Columbia, made several clubs. These mass-produced clubs had the following characteristics in common:

Such average clubs can cost as low as $30.

What Are the Most Valuable Vintage Golf Clubs

Generally, clubs with wooden shafts fall on the lower end of the old golf clubs’ collectibility spectrum. But the following are some valuable vintage clubs you can find on eBay:

Below are the most valuable antique golf clubs ever sold at auction:

This long-nosed putter that sold at the Sothebys auction dates back to the 1700s is the most valuable golf club ever sold. It has remained in tip-top shape.

The club has a makers stamp and is in tip-top shape is officially one of the few rare clubs made in this era. It’s no wonder it’s displayed at the Glasgow International Exhibition, known for displaying golf artifacts of Scottish history.

This putter is made of fruitwood and metal. It was built in the late 17th century and had a long history that’s prompted its value.

It was crafted by Cossar Club, one of the oldest and most prestigious brands, likely another reason this club sold at $165,000.

This is another of the oldest collectibles dating back to the 17th century.

There being only 12 known putters from this era, plus the fact that it needed no repair to enhance its value, age, or condition, makes this club much coveted. It’s no wonder it sold for $151 at a Sotheby auction in 2007.

This club was built by Barth and Sons, a German company known for superior craftsmanship.

Its head and shaft comprise a pretty thick layer of 24-carat gold. And believe it or not, it also has diamonds embedded in the wood.

Although this club was manufactured in the 1800s, it’s still in great shape, requiring no repair to enhance its appearance.

The club has been authenticated and bears an imprint of the date of manufacture, making it a valued collectible.

You might know Spalding as a basketball maker. But decades ago, Spalding made golf clubs, including this Palmer Patent Fork Shaft Wood.

Only 21 of these clubs exist today. They’re made of brass or copper and resemble Tiger Woods’s club in his 1997 victory.

How Many Years Should Golf Clubs Last?

Back in the day, golf clubs did not last long. They were built out of materials that wore out pretty fast.

However, today golf clubs can last several years, even a lifetime, if well-maintained. Besides how well you care for them, the quality and usage also matter.

If you frequently play, perhaps thrice or four times a week, your clubs will need replacing sooner. The grooves wear out, and you’ll notice the ball does not travel as far as it once did. Still, with proper care, the clubs can last seven years.

On the other hand, if you play a game of golf on some weekends, with proper maintenance, they can last very long, even a lifetime.

Now you understand more about antique golf clubs and how to identify their value. If you think you have a valuable piece or want to buy one, you know what traits you should look out for to identify. Then you can use the value guide outlined above to determine how much it’s worth.