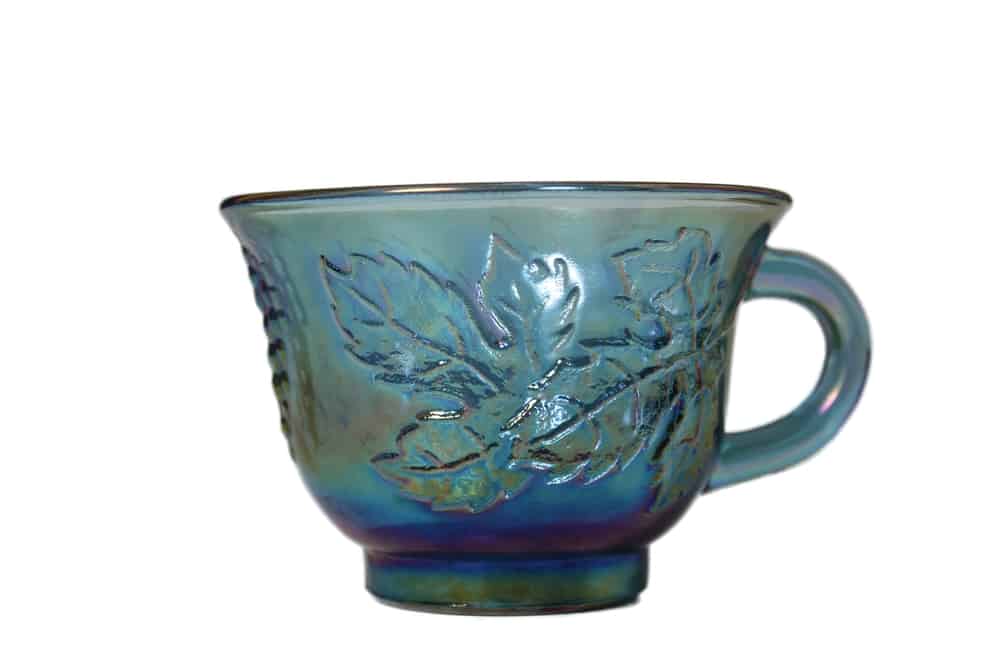 Once extremely popular in the 1920s and almost forgotten during the 1940s, today carnival glass is making a return, especially among antique collectors. Many pieces have sold for thousands of dollars, and who knows, maybe you have a rare piece collecting dust in the cupboard.

In this article, we will explain everything you need to know regarding carnival glass, from its history and different types, to how to correctly identify and date it.

What Is Carnival Glass?

Carnival glassware was first manufactured in 1908 by the Fenton Art Glass Company. At first, such glass was called “iridill”, a word probably derived from the fact that the glass was iridescent.

It means that such a glass gives off a multi-color sheen which changes in color depending on the viewing angle. That’s the main characteristic of carnival glass, but another key feature is that such pieces are decorated with intricate designs of various patterns.

Carnival glass imitated more expensive iridescent glass pieces like the ones made by Tiffany. As a result, carnival glass was also called “poor man’s Tiffany glass”.

The name “carnival glass” itself comes from the fact that such pieces were often given out as prizes for winning carnival games. Its popularity peaked in the 1920s but steeply declined in the following decades.

Carnival glass was made using molds, after which the maker would shape the patterns on the surface. That’s the reason why such pieces were much cheaper than blown competitors, which were more expensive and time-consuming to produce.

Finally, the iridescence of carnival glass is a result of metallic salts that would be added onto the surface of the glass while it was still very hot.

There were at least over 20 carnival glass manufacturers, some of which have continued producing such glass to this very day. Some of the biggest in the U.S include:

Countries on other continents also had carnival glass manufacturers, like Crown Crystal in Australia, Jain of Firozabad in India, and Rigolleau in Argentina.

It’s simply impossible to say how many different types of carnival glass there are. It’s because pieces varied by color, pattern, shape, and size, and each manufacturer produced its own variations of carnival glass.

For example, there are over 50 types of color variations that authentic carnival glass can have, and that’s talking about the base color, which can look completely different than the surface color which contains metallic salts.

One of the most popular colors was the so-called marigold. While the glass itself is completely clear, the surface color of marigold pieces can range drastically.

Two of the most common hues of marigold surface colors are pastel and pumpkin. Pastel marigold is lighter, and it’s often said that it has a “satiny” effect, while pumpkin marigold is richer and stronger, almost looking red.

Some other popular carnival glass colors are:

Moving onto the patterns, there are over 2,000 different ones, but some of the most common that were used by most manufacturers include:

Carnival glass was also made in dozens or even hundreds of different shapes, ranging from bowls to lamps. Some of the most popular shapes were:

So all things considered, there might have been tens of thousands of different variations of carnival glass. That being said, let’s see how to identify if a certain glass piece is actually authentic carnival glass or a fake.

How to Identify Carnival Glass?

There are many pieces of glass that are called “carnival” when in reality they aren’t. Some people sell fake carnival glass without even knowing it, so it’s important to know how to correctly identify carnival glass.

Luckily, there are many indicators that can help you to understand if it’s real or fake:

The manufacturing process of carnival glass involves it being covered with metallic salts when the surface of the glass is still very hot. It results in carnival glass having the iconic rainbow sheen which is difficult to fake.

Most people compare this sheen to an oil slick on the surface of the water. Regardless of the color of the carnival glass, it’s going to shine this way, but make sure you test it in a light environment because it’s not visible in the dark.

In addition to that, the base of the carnival glass piece shouldn’t give off this sheen. The manufacturers didn’t apply the metallic salts there because the base is the only part of a piece that isn’t supposed to be seen.

As a result, if there’s a carnival glass that’s listed as “marigold”, but its base isn’t clear, it’s definitely a fake.

Finally, if a carnival glass piece has a rare color (e.g., black amethyst, ice green) but it’s being sold for cheap, chances are it’s fake.

The patterns of carnival glass are even less useful for identifying a real piece from a fake one just because of how many different patterns there are. Additionally, there are some one-of-a-kind pieces with patterns that weren’t used on other items.

Because of that, you might encounter an extremely rare carnival glass and think it’s fake just because you can’t find such a pattern elsewhere. However, if there’s a piece featuring a rare pattern (e.g., Strawberry Scroll by Fenton, Farmyard by Dugan) that’s being sold for cheap, it’s probably fake.

Carnival glass is made with molds, instead of being blown. As a result, it doesn’t have pronounced seams, and they’re also hidden by the patterns. It means that you shouldn’t notice seams on the majority of authentic carnival glass pieces.

If you can easily spot seams where two sides of the glass were connected, it almost always means that it’s a counterfeit piece.

Because of the way it was made, the glass was distributed evenly throughout the piece. Most fake pieces are noticeably thicker at the base, and it can help you to identify an authentic piece from a fake one.

Fake carnival glass is such a big industry that some fakes have become so popular, that they’re known to most carnival glass experts. There are online lists of known fakes, some of which include:

If you’re thinking of buying a carnival glass piece, always try looking online if there are known fakes of a similar type.

One of the best ways to correctly identify carnival glass is to refer to one of many books written which describe many different types of authentic pieces, including dimensions, colors, price range, and so on.

No book includes every single carnival glass piece ever made, but such books describe hundreds of the most popular types.

You can check whether the description in the book matches the piece you’re trying to buy. Some of the best books are:

Finally, the best way to identify carnival glass is to ask experts for help. Carnival glass has many enthusiasts all around the world that are more than willing to help newcomers avoid getting scammed.

If you can’t find one locally, you can go to one of many forums and ask whether the piece you’re thinking of buying is authentic or not.

Some of the best websites include:

How Do You Know If Carnival Glass Is Valuable?

Determining the value of carnival glass is extremely difficult compared to other kinds of antique items. It’s because most pieces aren’t marked by manufacturers, and others have continued producing pieces to this very day.

As a result, it’s difficult to gauge how valuable a certain piece is. However, there are several factors playing into it, and experts can assess the value of a piece by correctly analyzing the following factors:

That’s the most important thing in determining whether carnival glass is valuable. Even the rarest piece won’t sell for much if it’s completely destroyed. The condition includes things like scratches, cracks, chips, and the quality of the metallic salt glaze.

As a rule of thumb, the older an antique is, the more valuable it is. Sadly with carnival glass, it’s often difficult to pinpoint the exact date of production if a piece doesn’t come with an official certificate stating its date and manufacturer.

Additionally, carnival glass made before World War II (pre-1940s) is usually more valuable than pieces made afterward. It’s because, during the war, many antique items were stolen or destroyed, making them extremely rare.

If carnival glass is old and in mint condition, then the ultimate factor influencing its value is going to be its rarity. There are even some one-of-a-kind pieces, meaning that only a single piece of such type was produced, or that there’s only one left known to exist.

Rarity is a combination of color, pattern, and shape. Some of the rarest colors include:

Some of the rarest patterns include:

Finally, there isn’t really the “rarest” shape or size of carnival glass. That being said if all things are equal, the larger piece will almost always be more valuable. However, some of the more interesting shapes include:

What Is the Difference between Carnival Glass and Depression Glass?

Many people confuse carnival glass with depression glass, due to their similarities in appearance and history. Both types of glass were the most popular in the first half of the 20th century.

Furthermore, carnival glass is iridescent, meaning it has a unique multi-color sheen. On the other hand, depression glass is characterized by a single-color look.

The Most Expensive Carnival Glass Sold

To end the article, let’s take a look at the top 5 most expensive carnival glass pieces ever sold: 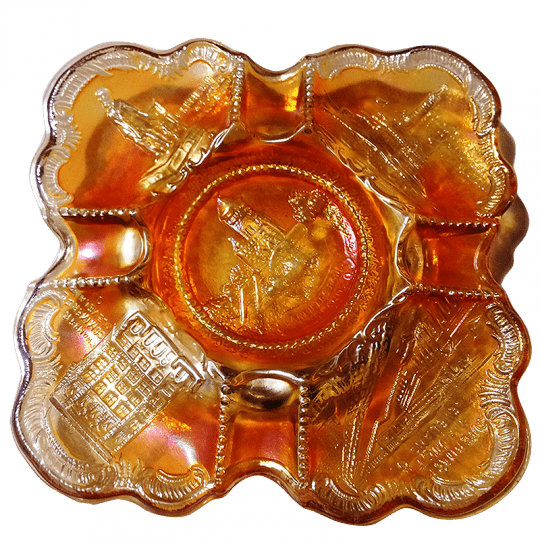 This ashtray has a unique pattern featuring some of the most iconic buildings in Cleveland, like Superior Viaducts, Chamber of Commerce, and Garfield’s tomb.

Despite being made in marigold color, which is one of the most commonly found colors in carnival glass, it was sold for $55,000 in a 2020 auction.

Northwood is one of the most known carnival glass producers, and it produced this celeste blue-colored vase featuring a tornado pattern that culminates in a tri-cornered opening at the top.

This is a 10 1/4″ diameter bowl with an intricate peacock pattern, but even more fascinating is its color called “vaseline”. It was created using uranium salts as a finish, resulting in a yellow-colored glass, which is glowing in the dark when illuminated with a UV light!

It’s the third carnival glass by Northwood on the list, this time an emerald-green colored vase with a reddish-brown finish. So far, it’s the most valuable Northwood piece, as it sold for $140,000 in 2018.

This vase was manufactured by Millersburg and is regarded as the most iconic carnival glass piece ever made. It features a pattern of dancing people, signifying the inhabitants of Millersburg, Ohio.

There are 10 known Millersburg Peoples vases existing today, and they were made in different colors, like marigold, green, and amethyst, but the blue one was destined to be the most expensive one, selling for $155,000 in 2018.