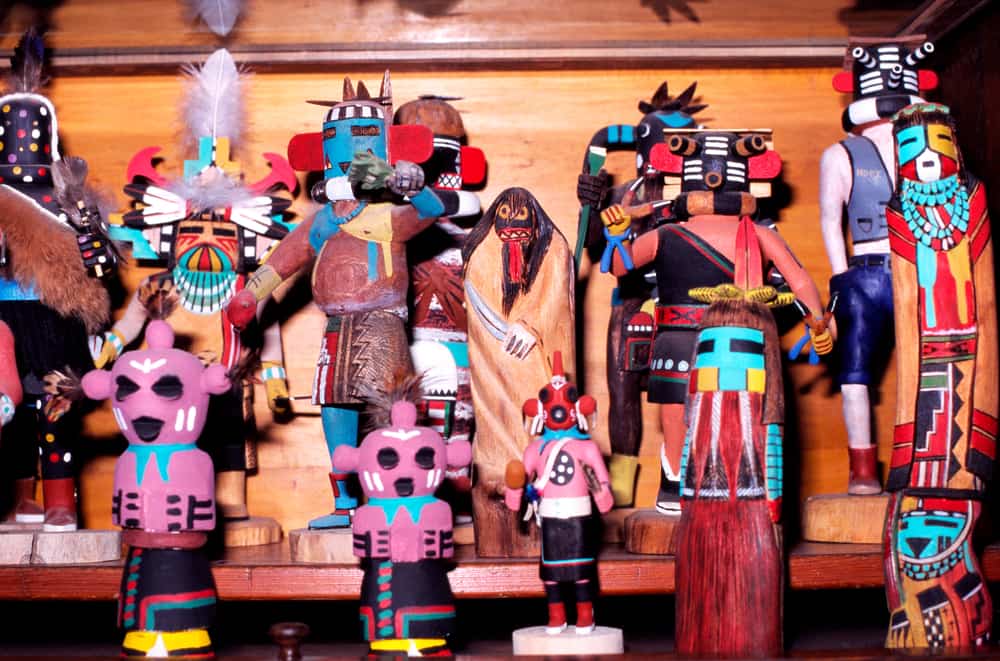 If we are going to talk about dolls, symbols of America’s popular culture, then probably the initial thought is to think of the iconic Barbie doll. However, there are other types of dolls with tremendous value and symbolism in the native American culture, and these are not other than the “Hopi Kachina” dolls.

The Kachina Dolls are of great value to many of us who dedicate the time to collecting them. Why so much interest? Their history and symbolism are enriching and attractive; that is why I will talk a little bit about it, as well as some tips for identifying the Kachina dolls.

Getting to Know the Origin of the Kachina Dolls

The origin of the Kachina dolls is found in Arizona’s northwestern plateaus, where the native people of the tribe “Hopi” resided, people who were the first and the leading manufacturers of these dolls.

Its elaboration goes back a long time, which is found in the figure with the most antiquity data from the eighteenth century. This figure had a very undistinguishable appearance, with possibly, a head and minimal body paint.

The Kachina dolls could come to light thanks to the merchants who had begun to obtain them in 1857. However, most of the Kachina dolls are from the late nineteenth century.

However, from 1945 to the present, the variations of the Hopi Kachina dolls figurines have multiplied, where its extravagancy has been increasing with the passing of time, bringing dolls with more realistic and detailed movements and badges.

It is worth noting that the Hopi were the first tribe to start carving Kachina dolls, but several other tribes joined them, like the case of the Zuni tribe, the Laguna tribe, the Aguna tribe, and the Navajos. Every one of these tribes put its unique characteristics into the dolls.

They sought to teach the new generations about their wisdom and culture, as the dolls were elaborated according to the imagery of supernatural beings worshipped by the tribe; these were not toys but religious icons to celebrate and contemplate often with dances while the dancers hold the doll in their hands.

Materials Used in the Dolls Carving

The elaboration of the Kachina dolls involves the poplar’s root as an essential material. This root is easy to carve, and the majority of the most antique dolls were carved with one sole root. However, many other roots like cottonwood root can currently be used for just one doll.

This figure is decorated and given detailed facial traits with Paint; in addition, Hopi Indians would adorn their heads with bird wings or ears, which are fabricated with corn husk flowers, hair, feathers, and even horns from real animals.

In the same manner, as these small wooden dolls have accessories related to the “Katsinam” chosen for the ceremony, the dolls can use other kinds of accessories like rattles, bows, and arrows, which are fabricated with pumpkins, staffs, corn, among others.

On the other hand, the ruffs around their necks are elaborated with fox skin, fabric, juniper, or Douglas fir. As I mentioned before, the clothes can be painted or created from cloth.

The Kachina dolls’ symbology is rich in its religious connotation, and it is pretty related to nature. In order to know and understand it, we have to go toward the native civilization of the tribe Hopi, the male relatives would give them to the little girls and the new brides of the tribe for them to learn about the Katsinas and in hope of future abundance.

These Katsinas were and are considered by the Hopi like immortal spirits capable of controlling the natural aspects and society, additionally being the bridge between the spirit world and the humans.

According to the cultural context, the Katsinas would go down to the people’s village every year to sing and dance during the time of the Winter solstice until the middle of July. These spirits also come to give rain that the following crop needs, give presents to the kids, and in general, good fortune.

Its particular aspects are taken from different representations of nature and even abstract concepts; this is because the Hopi believed that these Katsinas were personifications of things like rains, crops, animals, and ancestors, among others. Therefore, you can find Katsinas with animal heads, significant for the Hopi culture, like wolf, owl, or deer heads.

Every Kachina doll possesses unique attributes, which are elaborated by the men of the village, and always have similarities to the Katsinam chosen for that ceremony in particular. In addition to manufacturing the dolls, the men would wear a mask representing the Katsinam for the ceremony and dance and offer chants.

How to Identify a Kachina Doll

There are various types of Kachina dolls, approximately 250 (according to Pueblo Direct), but note that even the carvers themselves could identify every model due to the principal features and meaning every carver gives to the doll. However, the Kachina dolls have specific characteristics that are very useful for identifying them:

Most Valuable Kinds of Kachina Dolls

When pricing Kachina dolls, you must keep in mind that the ones made with only a wood piece are the most valuable. However, the key to its value lies in its carving, decoration, quality materials, and longevity.

Similarly, when it comes to the best models in contemporary art, they can be sold for more than $50.000. I would recommend taking your time to see the price for which some models have been sold in auctions (not sale price), so you can see that, even though most of the dolls can be sold for under $100, there are some pretty valuable models.

The Kachina dolls are an iconic symbol of the tribe Hopi’s beliefs, as well as part of the American native culture. Although it is true that the elaboration of these in recent times no longer has that much religious connotation since they are elaborated for a more commercial purpose, there are still plenty of models that are very representative of the original elaboration.

If you are interested in collecting them, I recommend that you do not just do your homework about what these dolls symbolize and represent but also get in touch with professionals of the Hopi world, pueblo Indians, or local museum appraisers so that you can identify and acquire gorgeous and valuable Kachina doll models.