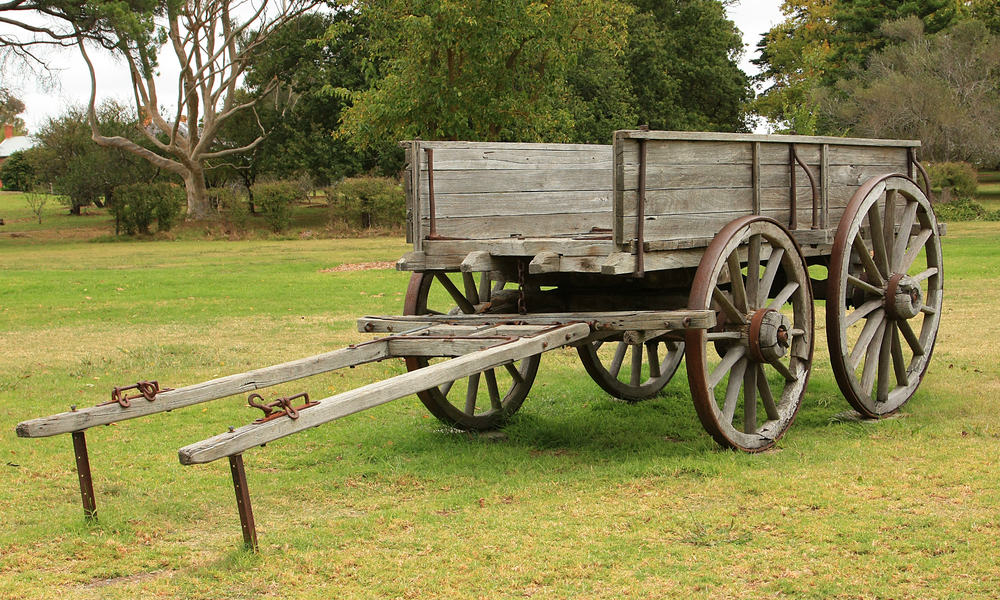 It is confirmed that ancient nations used farm wagons with pivoted front axles since the 1st century BC. First American settlers used draft animals, like horses, oxen, or mules, to move their four-wheeled prairie schooners while searching for prosperity in the Wild West.

Thanks to art, literature, and movies, most people know about antique farm wagons. However, only farmers and dedicated collectors enjoy keeping these traditional tools because of their historical significance.

A four-wheeled farm wagon was a vehicle people used for transportation and carrying goods since the 1st century BC. It was dragged by draft animals, including horses, oxen, mules, and donkeys.

Unlike unstable carts with two wheels, wagons provided a smoother ride and were stable enough for hauling freight, thanks to the four wheels. You can find preserved vehicles in numerous sizes and types, including the coach appearing in the 16th century. 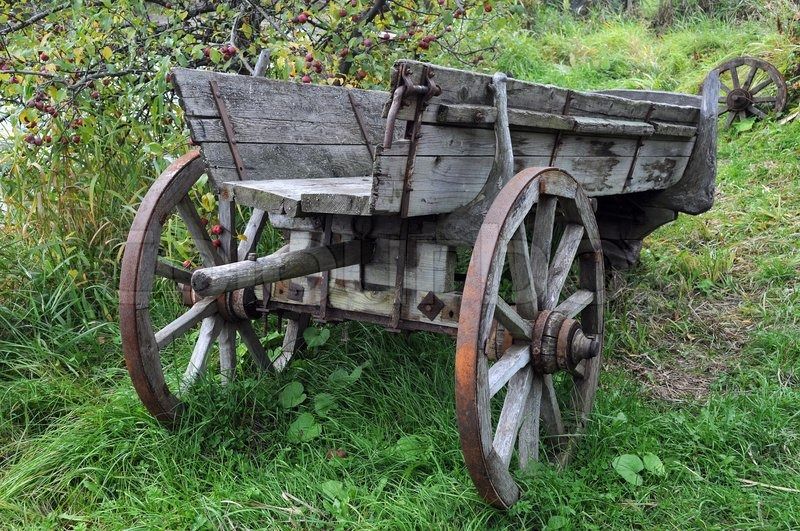 In the new world, that first wagon type developed into the Conestoga, a freight wagon that people primarily used in the 18th century. The next step was the prairie schooner that helped settlers travel to the American West.

Be aware that farm wagons were vital for farmers to carry crops and equipment. It was impossible to find a farm without at least one, particularly in the period before the industrial age.

Believe it or not, farmers used these wagons until the 1950s, and you can probably still find some in barns if you live in rural American regions.

It was impossible to determine only one farm wagon type since they varied in size and appearance, depending on the country and region.

Conestoga was the most popular freight farm wagon in the western region, but the crucial wagon types used on farms were: 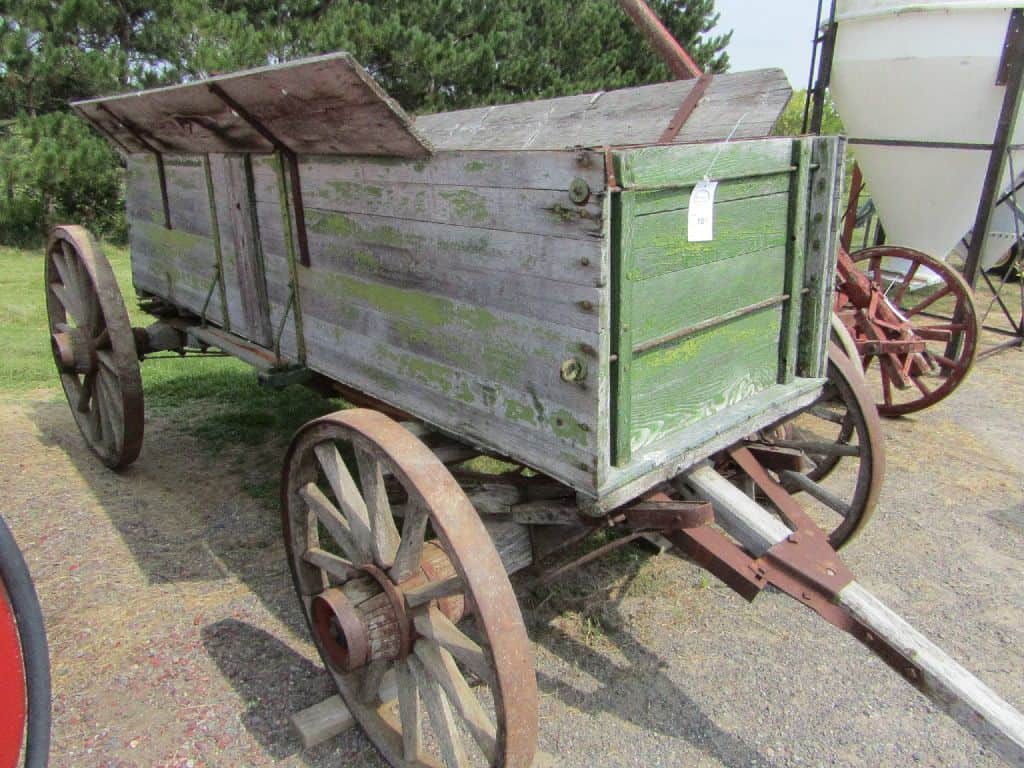 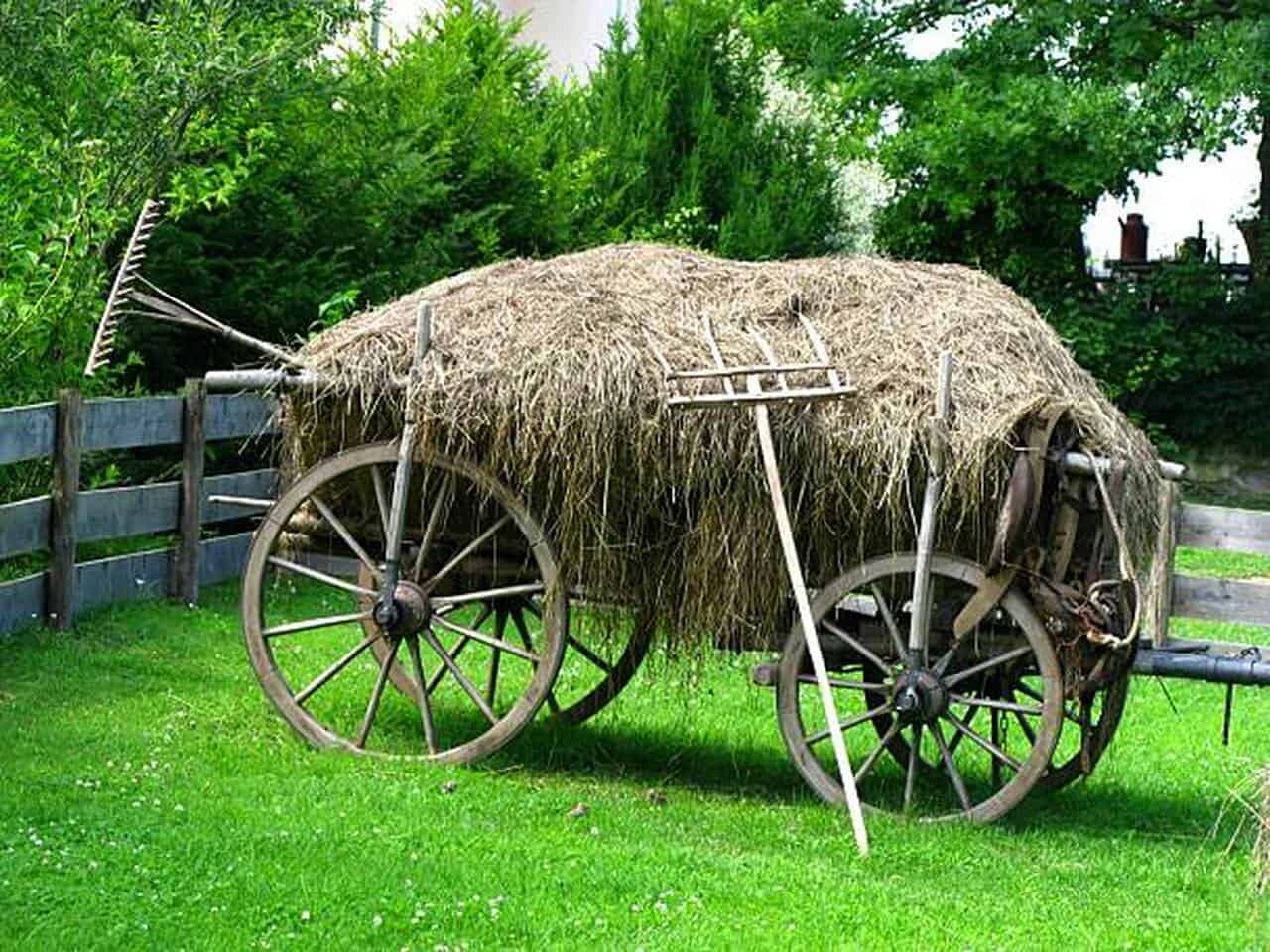 This wagon type had a primary purpose of carrying hay.

The old wagon’s construction was simple and included rectangular wooden beds, a bench, and sizable wooden wheels. However, old black and white photos can’t show you all their beauty. Farmers used them for hard work while enjoying colors and elegance as much as possible. Let’s see.

Antique farm wagons used in North America during the 19th and 20th centuries were produced in color. Most models came in bright yellow, orange, red, and green shades. Farmers often hand-painted axels and wheel rims in contrasting colors to make them more appealing.

Unfortunately, these antique wagons were exposed to the sun and harsh weather for decades and often significantly lost paint. However, you can still find those with dulled but preserved colors or at least visible color remnants.

Farm equipment manufacturers accepted a common practice to mark their products with recognizable marks or logos. The list of the most famous and atypical brands includes:

Even though most marks and logos have been worn out, damaged, or lost over time, you can sometimes notice a full or partial logo and determine the farm wagon brand. It was crucial when planning restoration since each wagon type was unique.

Nearly every American farm had at least one farm wagon until the mid-1950s. Most were built the same way, even though each manufacturer developed unique variations.

Basically, farm wagons had a removable body and one running gear, and farmers could replace it whenever possible.

You can quickly recognize these vehicles’ origin by the wood used for making its body. For instance, manufacturers from the Southeast used hickory, but oak was the primary material used in the Northeast.

Antique farm wagons are sizable and heavy, so keeping them can be a problem unless you have your own farm. Sometimes, selling them is the only option. Unfortunately, their transportation can be a problem, particularly on long distances.

However, you can find a buyer among collectors when deciding not to use or repair your heritage. Most well-preserved models are valuable even when they require some repairs.

Antique wagons, including farm models, can be worth thousands of dollars when branded and in pristine condition without significant restorations.

Be aware that painting and changing wheels can lower the price by more than a half, so you should be careful if you have such a historical treasure.

Prices you can find online can significantly vary. For instance, the original Mitchell wagon with the intact painted stencils is on offer for just under $11,000. On the other hand, a blue colonial farm wagon costs almost $6,000. 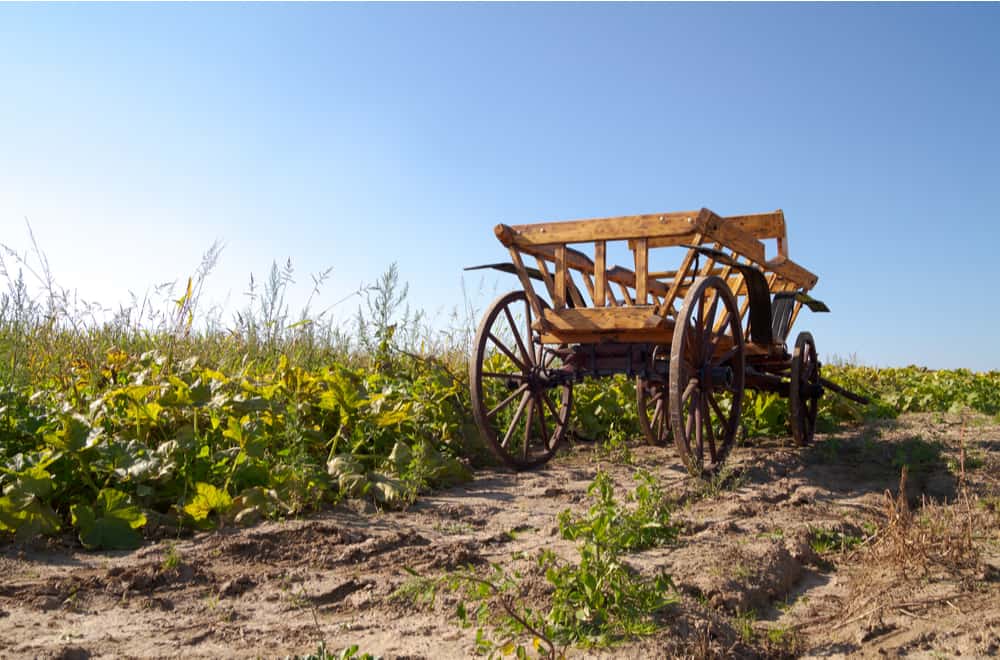 Nowadays, almost no one, including farmers, use antique farm wagons. Sometimes, selling one can be highly complicated, primarily because of difficult transportation.

However, such a piece of history deserves attention and good care, so you can put it to use in a few ways, including:

Museum exhibit – Donate your antique farm wagon to a local public history organization or museum. They are dedicated to collecting and preserving tools and items connected to the area where they are located. There is a chance they will be interested in a unique piece you have.

Annual hayrides – If your antique farm wagon is in excellent condition, you can use it to hold fall hayrides. It will be a kind way to contribute to the community.

Planter – If you have a sizable backyard, you can use your antique farm wagon as a massive planter. There is enough space for planting numerous colorful flower species.

This multi-purpose wagon type was built for general use in an agricultural or rural environment. Farmers used these tools for collecting and delivering hay, crops, and wood.

People used horses or oxen to pull their wagons in the past, but they introduced tractors later to make transportation more effortless. You could see that a buckboard farm wagon type was used in North America.

While the ladder farm wagon was more typical for Europe. 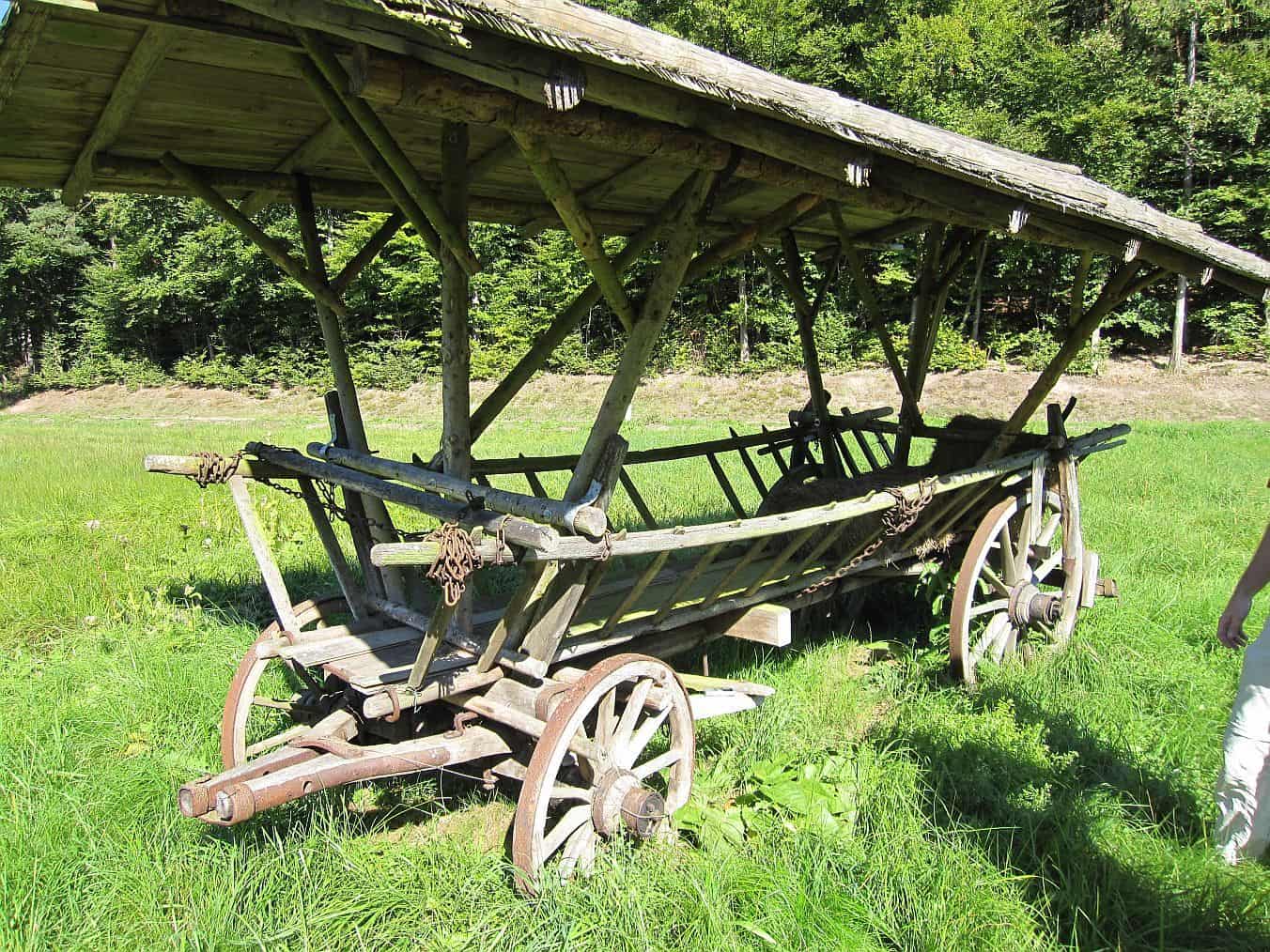 A driver needed to ride the horse or walk alongside the wagon since this model didn’t include a seat in the front part. However, some types had a so-called lazy-board, a removable plank on the left side for sitting when necessary.

Keep in mind that a lazy-board was placed on the right side in Britain. The goal was to let the driver walk in the road center.

You can see two types available in the US and Canada. The Conestoga wagon was mostly used for hauling freight across the Appalachian Mountains or on Old Spanish Trails in the late 18th and 19th centuries. 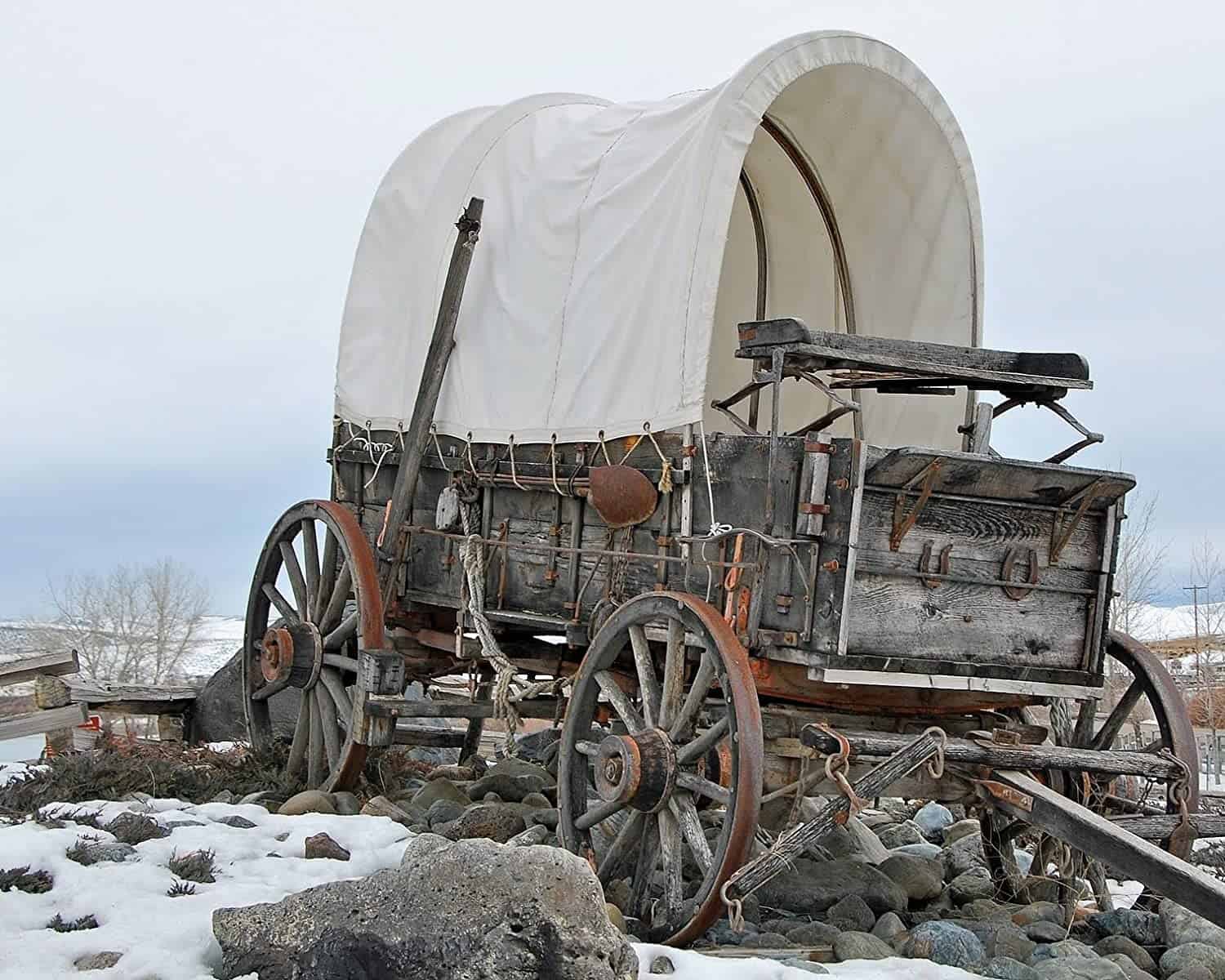 Its long box and large wheels, combined with extra carrying capacity, made it ideal for transporting large loads. The increased weight of up to 12,000 pounds (5,445 kg) required six to ten oxen to pull.

On the other hand, the Prairie Schooner was smaller, lighter, but more efficient and required only two to six oxen to pull up to 2,500 pounds (1,135 kg) of cargo. There was actually the third, larger freight wagon type, but it wasn’t common at the time. So-called twenty-mule team wagons could carry 36 short tons (32.7 metric tons) and were primarily used for hauling packs of borax from Death Valley. 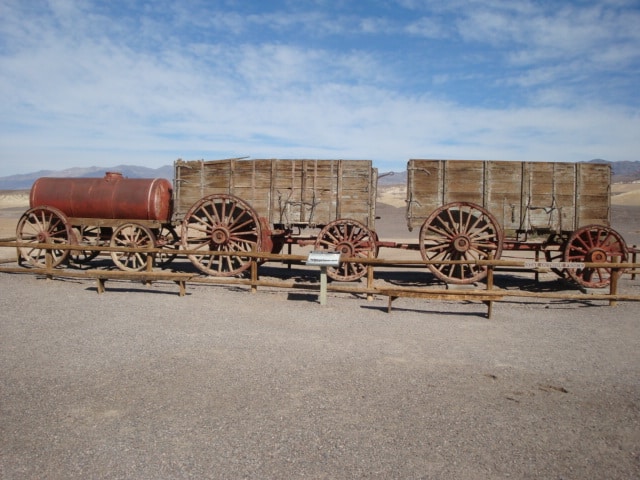 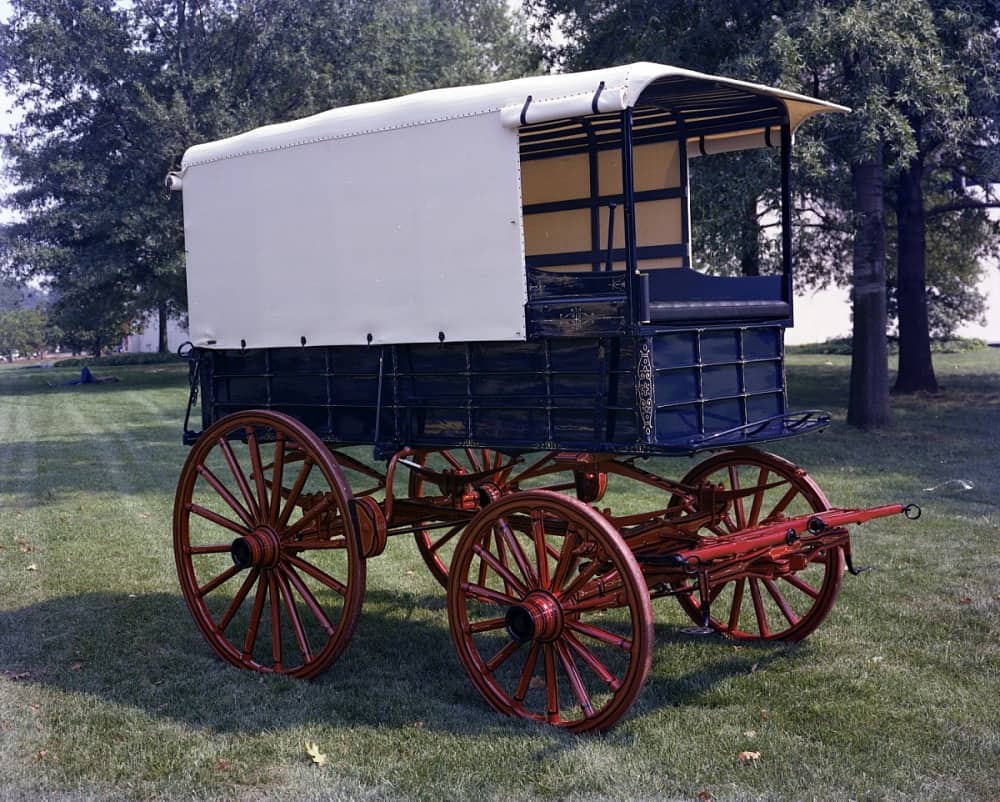 This wagon developed in the 19th century was widely used to deliver merchandise like bread, ice, milk, and other products from the market. Owners always finely painted, varnished, and lettered their vehicles, serving as advertising panels. 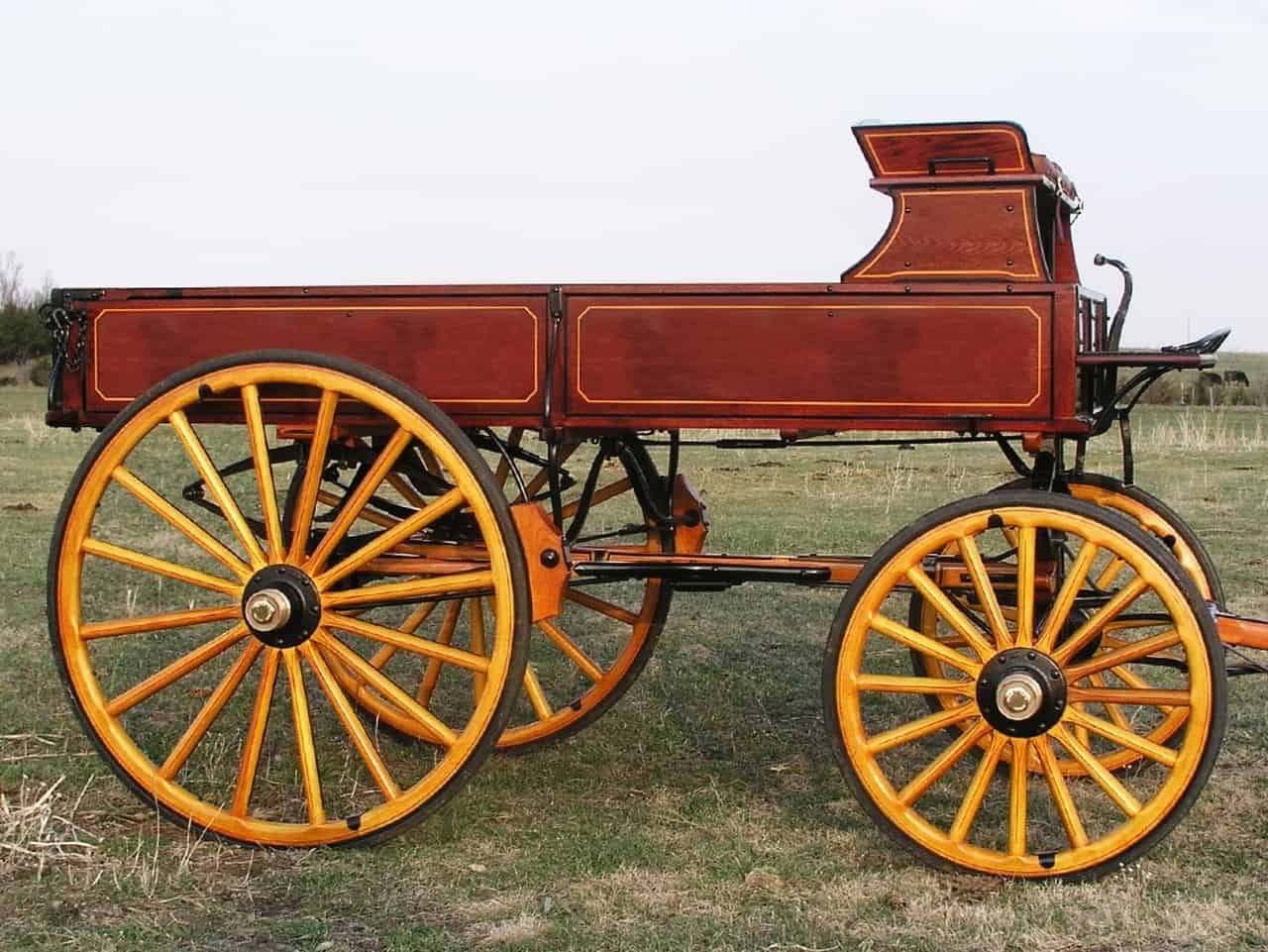 The express wagon was an irreplaceable lightweight delivery wagon for moving and delivering goods, particularly in cities. The primary use was in railway baggage deliveries. This covered field kitchen was handy on the US prairies. It was always a part of a settlers’ wagon train with the purpose of storing and transporting cooking equipment and easy-to-preserve food.

That way, people could bring coffee, salted meats, beans, and sourdough biscuits over long distances and prepare meals when needed. Americans used water tank farm wagons in Company Towns and villages without a regular water supply. They would bring water from a distance and provide it for home use or water town streets to keep the dust settled. Once cities began paving streets in 1910, sprinkler tank wagons became useless.

Interestingly, the German city Schwäbisch Gmünd’s residents have used a horse-drawn wagon with a water tank since 1992. They accepted that environment-friendly way to irrigate city plants. 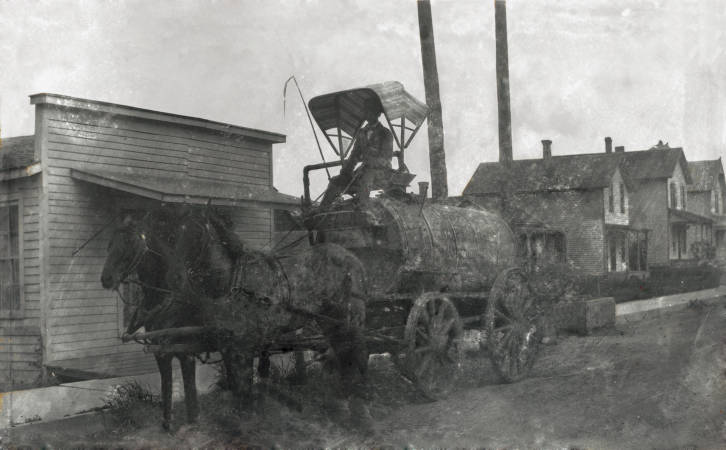 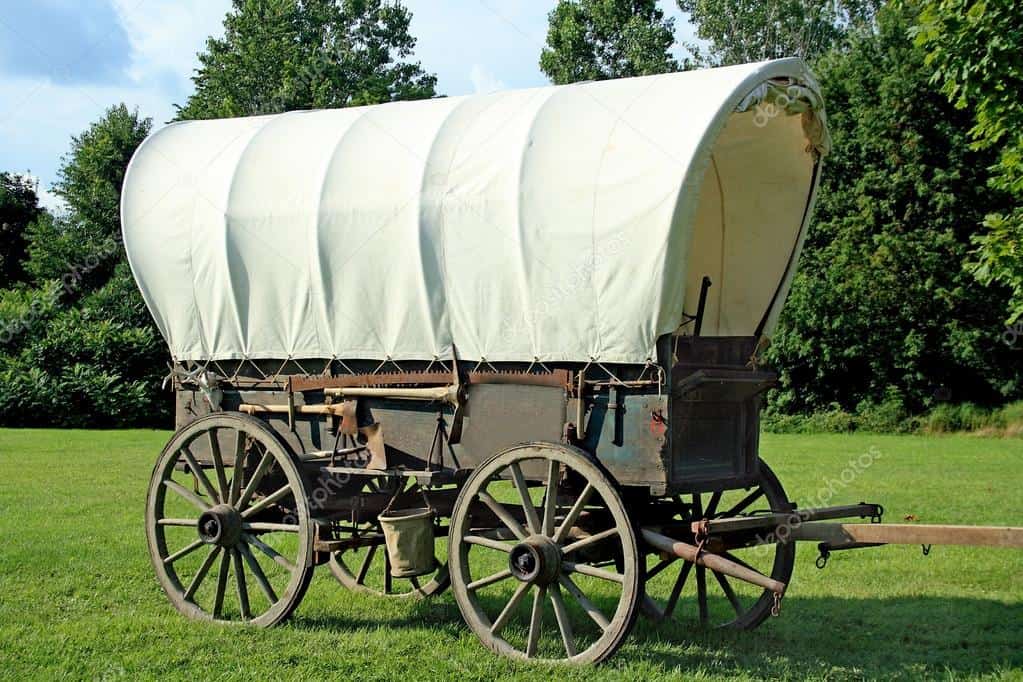 Riding around in this wagon type with leaf springs under the seats wasn’t a comfortable experience indeed. However, it kept passengers, food, household items, and other equipment safe from harsh weather and prairie sun. 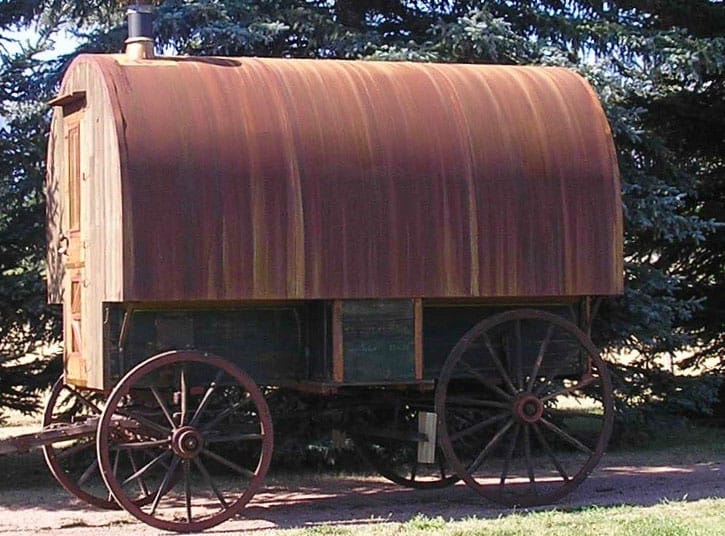 This wagon with iron wheels provided a mobile home for shepherds following sheep flocks between pastures. From the 15th to the 20th century, it was in use primarily in France and the United Kingdom. 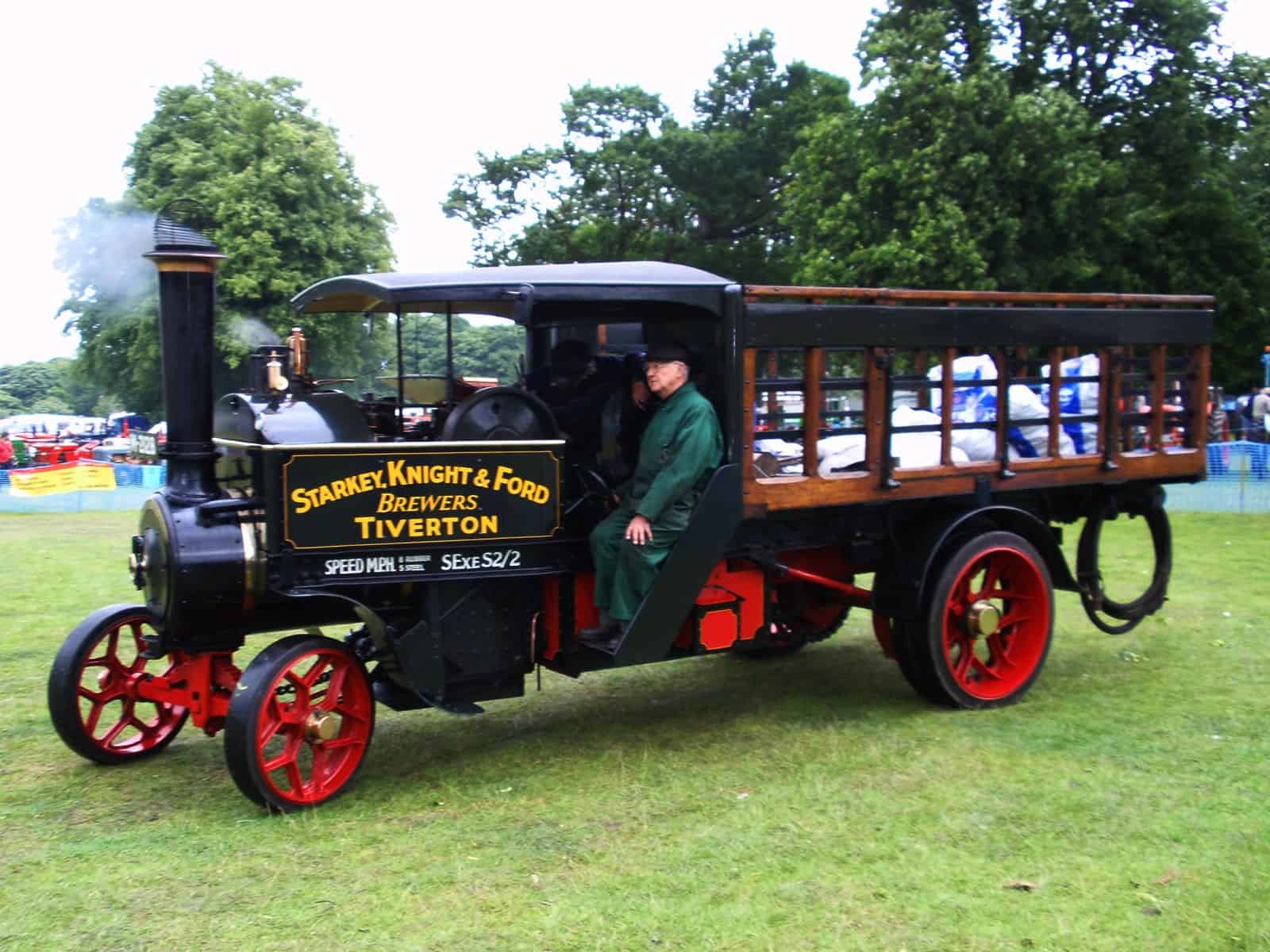 This self-powered wagon for carrying freight appeared in the late 19th century. You can find two primary forms of this earliest lorry, depending on the engine position: 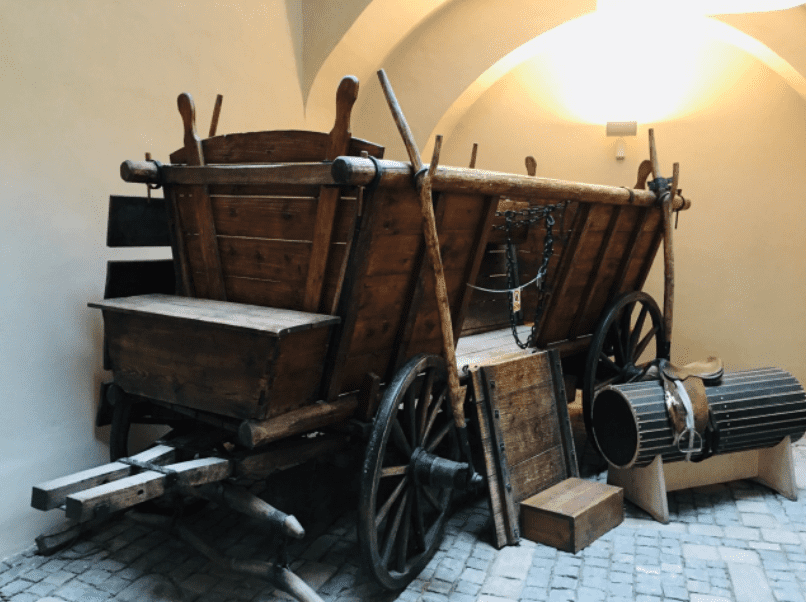 You can find a few different historical animal-drawn war wagon types. They were typically armored and armed. These vehicles were crucial during the Hussite Wars in Bohemia in the early 15th century. They lost the primary purpose after field-piece artillery development. 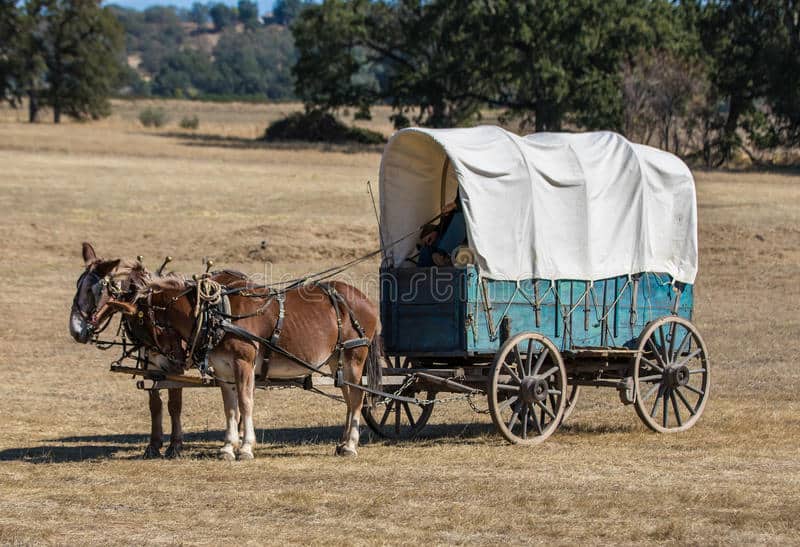 This wagon type was crucial for military logistics since it was used to carry supplies to the battlefield. The peak use was in wars from the 18th to the mid-20th centuries, including the American Civil War, when both sides supplied troops this way. 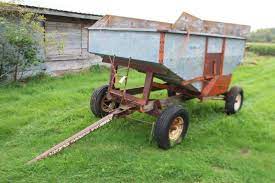 It was an angled hopper wagon type with one vertical side and three sides at an angle of 45 degrees. That construction allowed it to use gravity to make the unloading easier. 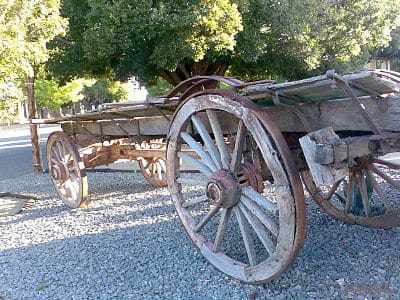 Unlike the Bullock cart featuring two wheels, a four-wheeled ox wagon was a traditional transport form in Australia, New Zealand, and Southern Africa since 1670. 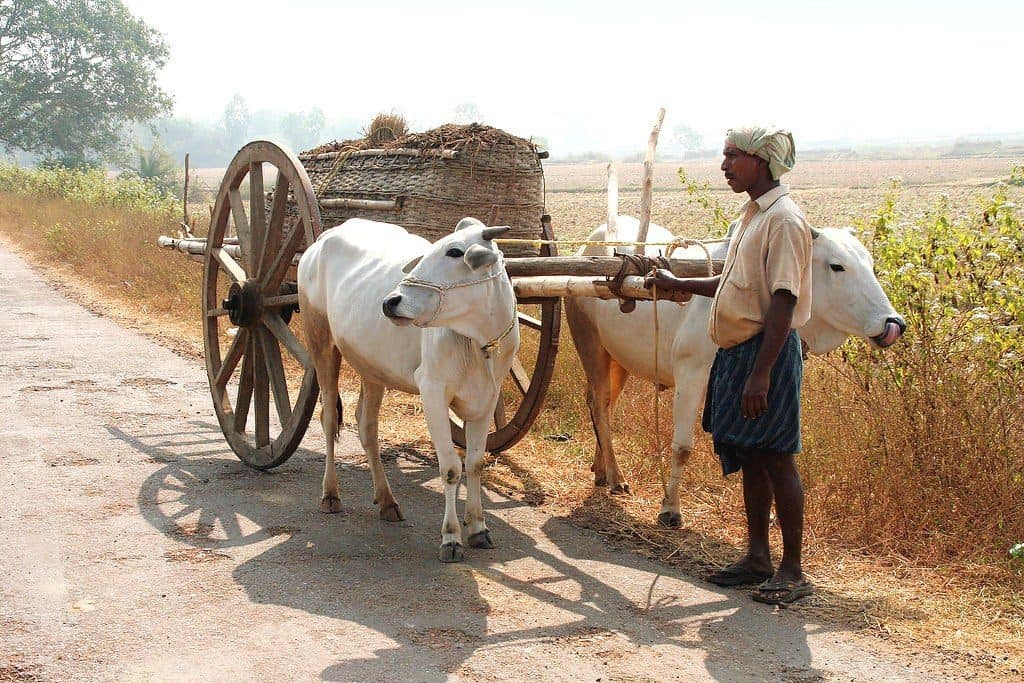 However, you can also find this wagon pulled by a pair of draught cattle in some American states. 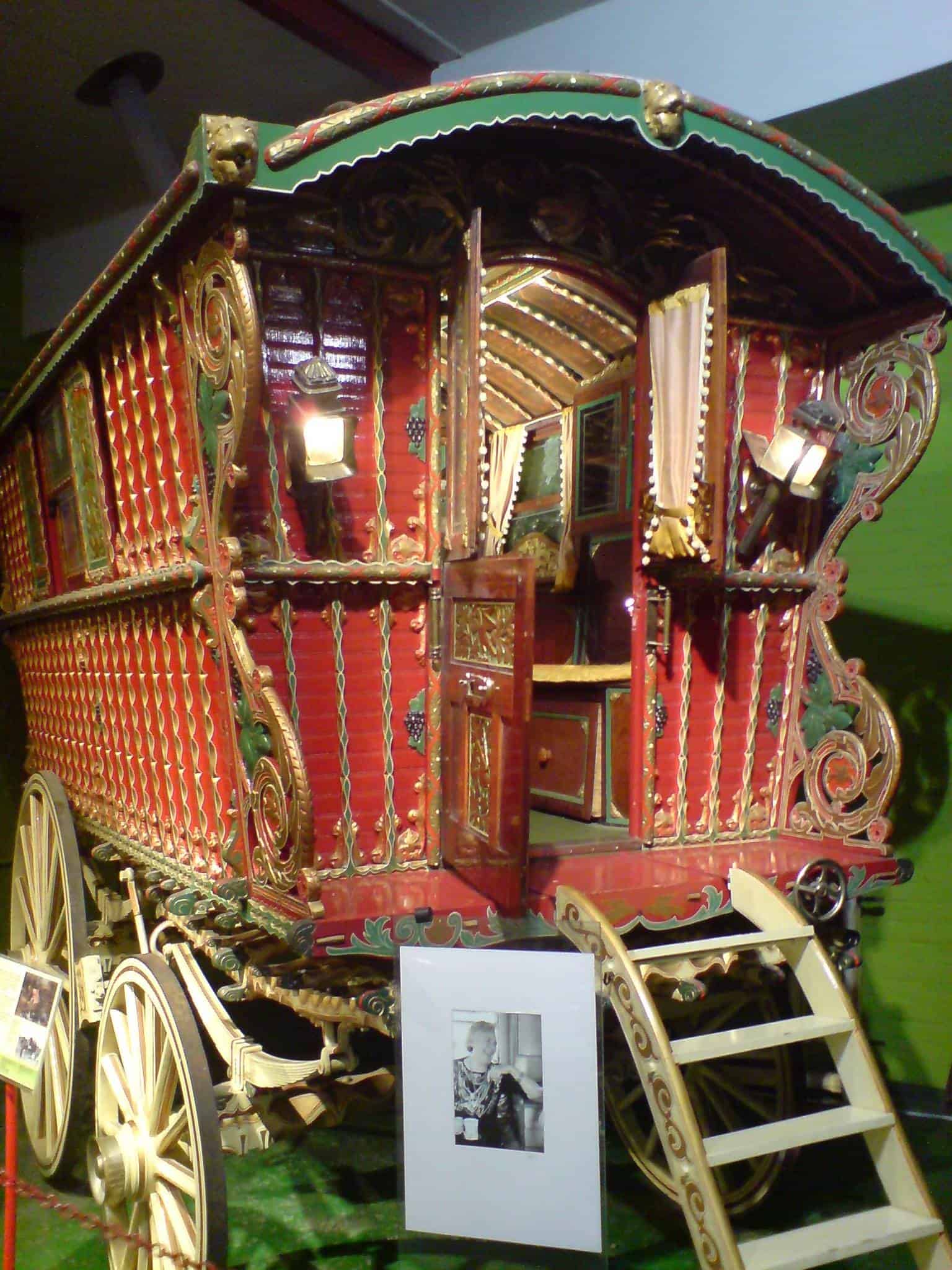 This wagon type served as a mobile home or workshop in the 19th century. The best-known is the Vardo, a traditional British Romani people’s wagon they use as mobile homes.

Believe it or not, you can still use sizeable antique farm wagons after only an essential reparation. However, most collectors use them as decoration.

On the other hand, you should set aside at least a few thousand dollars for the branded ones in pristine condition. Buying one model is the best way to show respect for our history and keep the tradition alive.