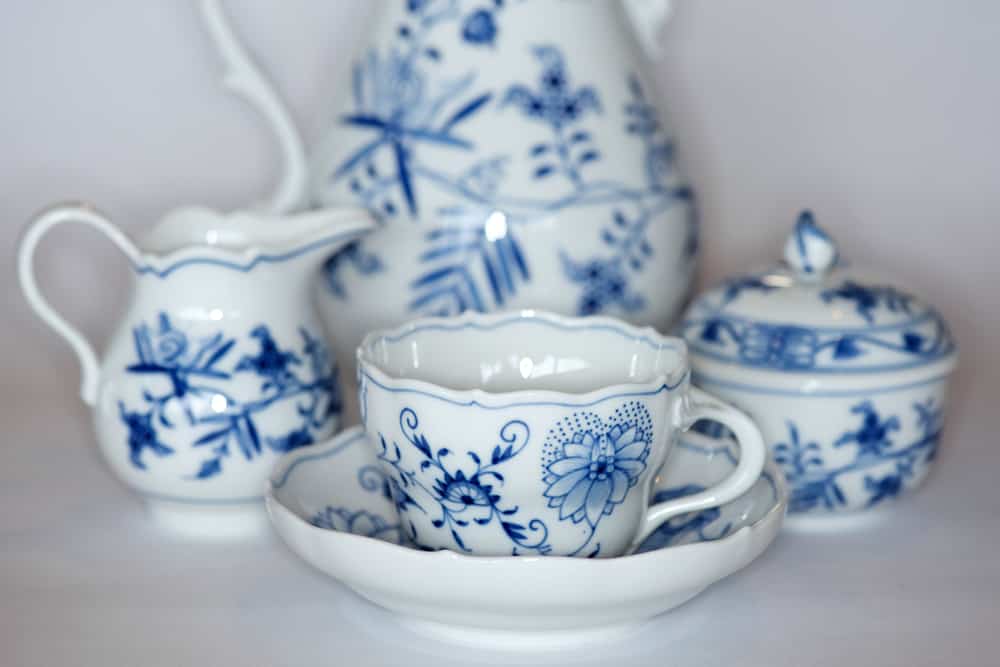 Antique German china is any type of dishware or porcelain that was produced in Germany over a century ago. It includes teacups, saucers, and teapots in tea sets, plates and bowls in tableware, and even decorative figurines.

Getting into antique china can be a great hobby that will give your home additional charm, and the best part about it is that the pieces aren’t that expensive compared to other antiques.

In this article, we’ll review the history of German china, then look at some of the most famous brands, and finally help you tell if a certain piece of German china is an authentic antique and recommend some places where you can buy or sell it.

Germany and Europe as a whole have had a peculiar relationship with porcelain. While other types of pottery like stoneware and earthenware were used widely all around the continent, Europeans got introduced to porcelain just in the 17th century.

The complex technique of firing porcelain items was developed in China, and the most prized, hard-paste porcelain was first achieved around the 7th century. It took additional 700 years for Koreans to figure out the process, and entire millennia for the Japanese.

However, no one in Europe could replicate the quality of porcelain that was imported from China in the 17th century. Various items made of the mysterious white, translucent and durable material charmed the nations of Europe, including the Germans.

While there was some success in creating porcelain-like materials, true hard-paste porcelain wasn’t successfully recreated until the countless experiments by a German alchemist Johann Friedrich Böttger.

He experimented with many minerals, rocks, and firing techniques until he managed to achieve porcelain that was comparable to that of China. Soon after, he got sponsored to open a factory and kickstarted the porcelain revolution in Germany and later in Europe.

At first, porcelain imported from China was thought to be superior to its German counterpart, but a decade after decade German china paved its own path and became coveted for its quality and designs.

Today, German china is still highly prized and many of the first factories that were opened in the 18th century are still in operation manufacturing modern porcelain pieces.

In the 18th century, Germany was home to every factory in Europe that could manufacture porcelain. The situation changed in the following centuries with French and English finally cracking the code of porcelain production.

However, most German china factories remained renowned, and in the following sections we’re going to introduce you to 4 that were some of the most influential and reputable in the European porcelain industry:

In 1710, Augustus the Strong, Elector of Saxony funded Johann Friedrich Böttger’s vision and founded the Meissen Porcelain Manufactory. It became the first factory in Europe mass-producing German china made of hard-style porcelain.

Even after other porcelain factories opened in Germany, Meissen remained the industry leader and main innovator. It developed new china manufacturing methods and focused on the art side of the pieces, trying to make them more than just wares.

It wouldn’t be far-fetched to say that the porcelain industry in Europe would be completely different if not for Johann Böttger cracking the secret behind making porcelain and getting the funding from Augustus the Strong to build the factory.

Meissen is still in business to this day and is owned by the state of Saxony where it has all begun.

This company was founded in 1763 by Prussian King Fredrick the Great, who was the third person to attempt such a feat in Berlin. The previous two failed due to a handful of circumstances.

Fredrick bought the manufactory from Johann Gotzkowsky and took over nearly 150 employees. While it wasn’t an easy task to save a failing business, porcelain was seen as “white gold”, and demand was definitely there.

KPM has designed and manufactured dozens of china shapes and patterns, some of which have barely changed since being created 200 years ago.

This porcelain manufacturing company wasn’t as prominent as the previous two, but it was also one of the first ones. It was founded in 1764 and at first manufactured chocolate, coffee, and tea services.

In 1785, Wallendorf expanded its production line and started making figurines. This company is still in the business to this very day and has kept its focus on producing the same product lines.

While technological advancements in the past few centuries slightly changed the porcelain firing and painting procedures, Wallendorf kept the same general procedures and is often praised for staying true to its traditions.

How Can You Tell If German China Is Antique?

German porcelain and china pieces can be slightly difficult to identify and date because the vital information is on the backstamp or mark hiding under the top layer of glaze. It makes it difficult to clearly see what exactly is portrayed by the backstamp.

However, using online resources like this and this can help you track down the manufacturer and identify whether it’s an authentic antique. Backstamps are usually located at the underside of the piece.

Additionally, you can estimate the year of production by knowing when certain backstamps were used:

(German china is manufactured by companies based in East Germany)

(German china is manufactured by companies based in East Germany)

However, keep in mind that German china made in the late 19th century could also be marked with different “Made in” backstamps, like Prussia or Bavaria. They are the states of Germany, and porcelain companies take pride in their home state to this day.

Is China Made in Germany Valuable?

German china was the first hard-paste porcelain that was manufactured in Europe. As a result, German porcelain is seen as the grandfather of the European porcelain industry that was later dominated by French and English products.

Today, you can buy the vast majority of German china pieces for anywhere between $100 and $200, but some are worth much more than that. The value of antique china made in Germany depends on several factors such as:

The age of an antique plays a huge part in its price and value. A useful rule of thumb is that the older the piece, the more expensive it’s going to be. German china which was some of the first-ever manufactured sells a lot for this fact alone.

Another important factor playing a part in the value of German china is its condition. Pieces in mint condition are always going to sell for more than exact same pieces with a few scratches on the surface.

The price gap between mint and excellent conditions is by far the biggest compared to those separating other grades. It’s because it’s just that much harder to find china without a single scratch or any sort of damage.

Additionally, owning antiques in mint condition has become sort of a status symbol among collectors, further separating the price gap.

To put it briefly, the rarer the piece, the more likely it’s going to be expensive. If the item is scarce, people will be willing to pay for it more than for an item that can be purchased anywhere.

Some of the rarest china made in Germany include hard-paste porcelain pieces that were the first of their kind. It’s because factories didn’t produce that many pieces without knowing how many customers would be interested in buying them.

Finally, the desirability of a porcelain piece also impacts its price. Most of the rarest German-made china pieces are sold at auctions, and some pieces are just more desirable than the others and get sold for more than previously estimated.

Knowing this, we can take a look at some of the most expensive antique porcelain pieces that were made by German manufacturers:

This service featured one of the most renowned patterns by Meissen, called “Blue Onion”. The design itself doesn’t show any onions, and it took such a name because it was localized to European flora from one blue and white pattern made in China.

This dinnerware assembly consisted of:

It sold at Christie’s auction in 2010 for $11,875. Taking into consideration that it has one of the most desirable patterns by Meissen and included 82 porcelain pieces, this deal was a steal.

Porcelain figurines were actually what made Meissen so popular. They replaced sugar sculptures that were commonly used to decorate large dinner tables of aristocracy parties.

Quickly enough, porcelain figures gained traction in other social classes, because they were cheaper than their sugar counterparts.

Interestingly, its auction price estimate was just £20,000-£30,000, so these figures are a good example of how demand for certain porcelain pieces can influence its price.

Fortunately, you don’t need to spend thousands of dollars if you want to own a piece of antique china made in Germany. Here are some recent examples that were sold this year: 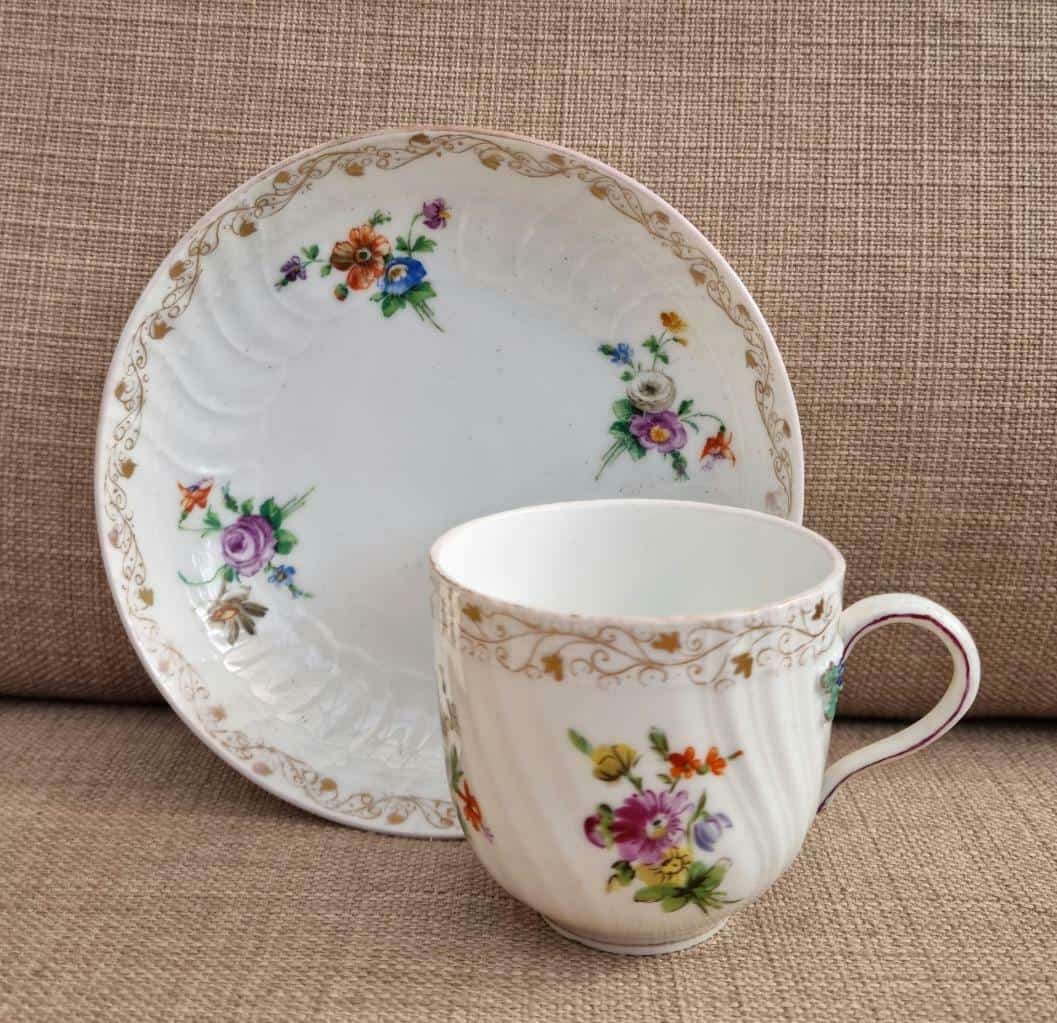 This 2.5-inch tall cup and 5.5-inch saucer combo adorned with floral designs were sold for just $21 in May 2022. The most fascinating part about it is that it was produced in 1860, making it a proper antique. 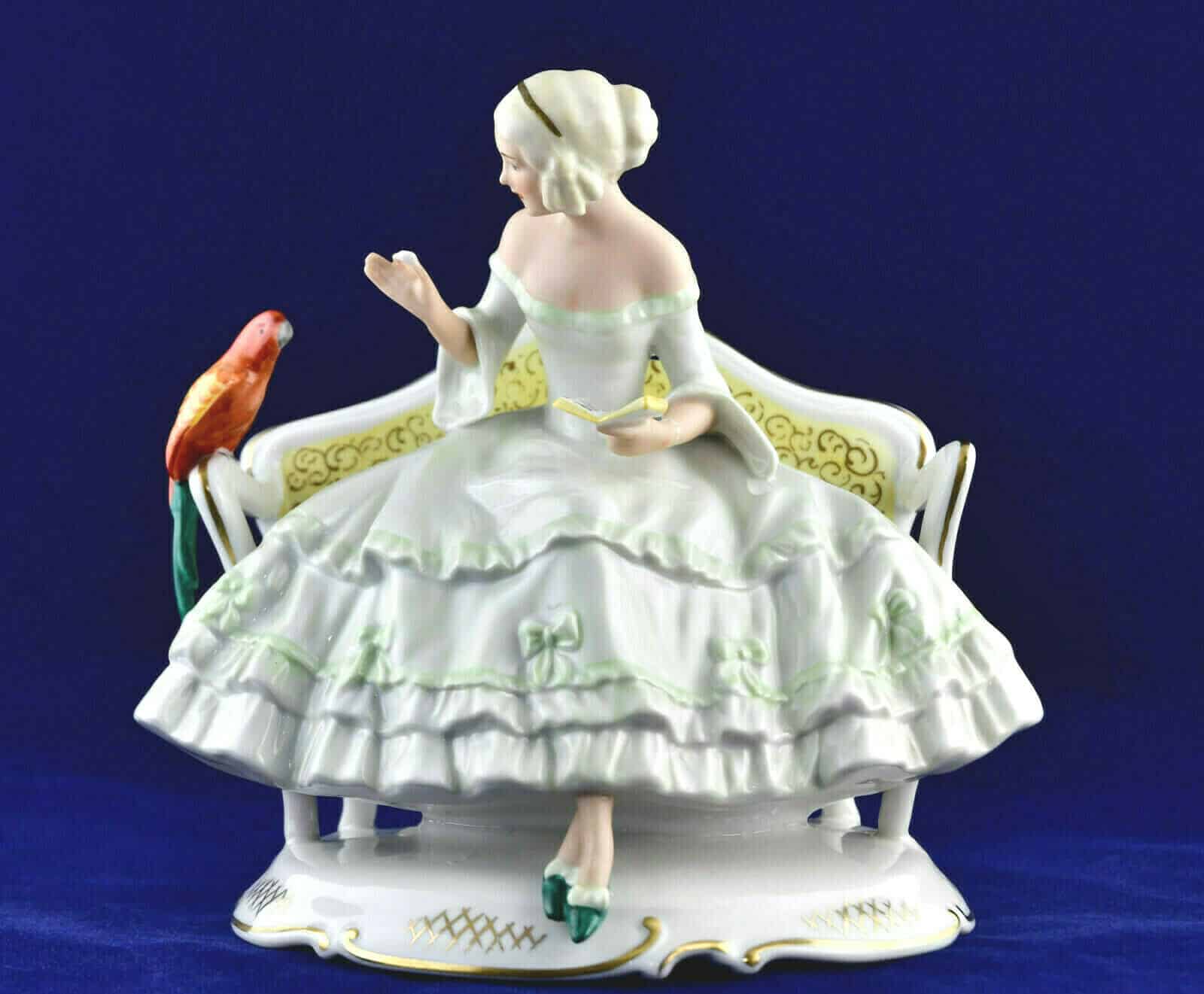 If you are interested in German porcelain figures instead of tableware, you also don’t have to break your bank when buying them. This figure of a lady with a parrot manufactured by Wallendorf was sold for $269.69 in May 2022.

You might think it’s so cheap because it’s either tiny or damaged, but in reality, it’s in excellent condition and is 7-inch tall. The only negative you could point out is that it was made in 1985, so it wouldn’t be considered a real antique.

However, if you don’t care about arbitrary definitions of what’s considered antique and what’s not, this figurine lady is a great example showing that you can get some pretty cool German porcelain without spending that much money.

How to Sell and Buy German China？

You could most likely find at least some German china at the antique store near you. We always recommend buying such items in person, because then you can inspect them closely and know exactly what you’re paying for.

However, antique stores have a limited selection, and if you’re looking for more options, we recommend you check out these two websites where you can both, sell and buy antique German china without having to worry about being scammed:

Founded in 1982, Replacements, Ltd. offers one of the largest china tableware selections in the entire world, including those made by German manufacturers.

The website is easy to navigate and there are many filter options so you can easily find exactly what you’re looking for. In addition to that, you can also sell your own German china pieces to this company just by following a quick procedure.

If you’re looking for something more special and want to buy rare German china, you should look into Sotheby’s auctions which are hosted all around the globe. The best part about it is that you can bid online from the comfort of your home.

Additionally, there are many listings for German china that you can buy on the spot, without having to participate in the auction. Finally, you can put your own German china for sale at Sotheby’s.