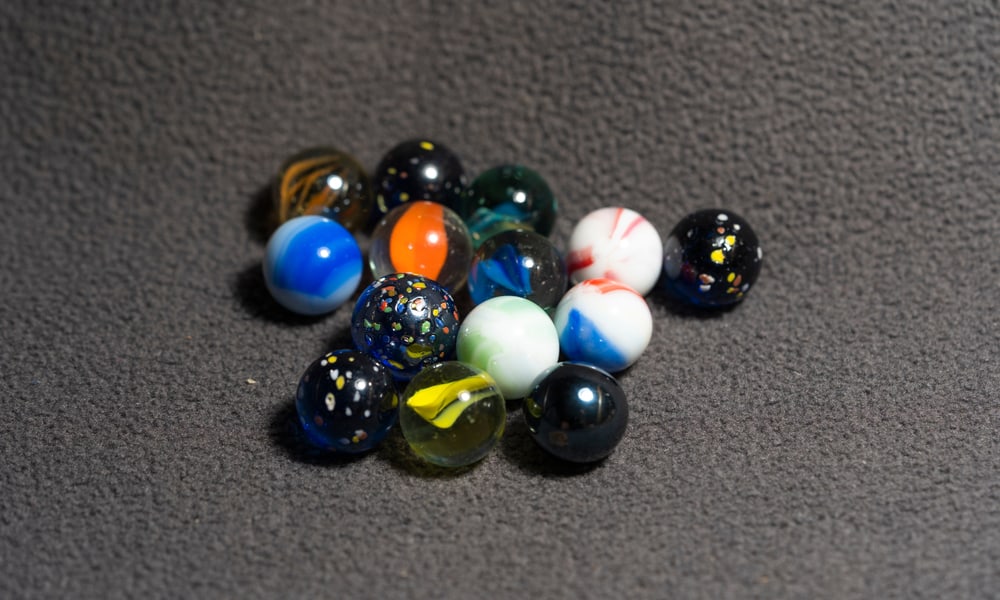 Who hasn’t enjoyed a game of marbles when they were a child? But those tiny pieces of glass can be more than fun – some of them are extremely valuable.

So just how much money can marbles make? And what is it them makes some of them worth a few cents, and others worth a small fortune?

That’s what we’re here to find out! We’re going to look at 17 of the most valuable vintage marbles to collect. And we’ll share what prices they achieved when they went under the auctioneers’ hammer.

So if you’re ready – let’s get started!

Most Valuable Vintage Marbles Worth Money

1. One White-Based and One Ghost Onionskin Marble $660 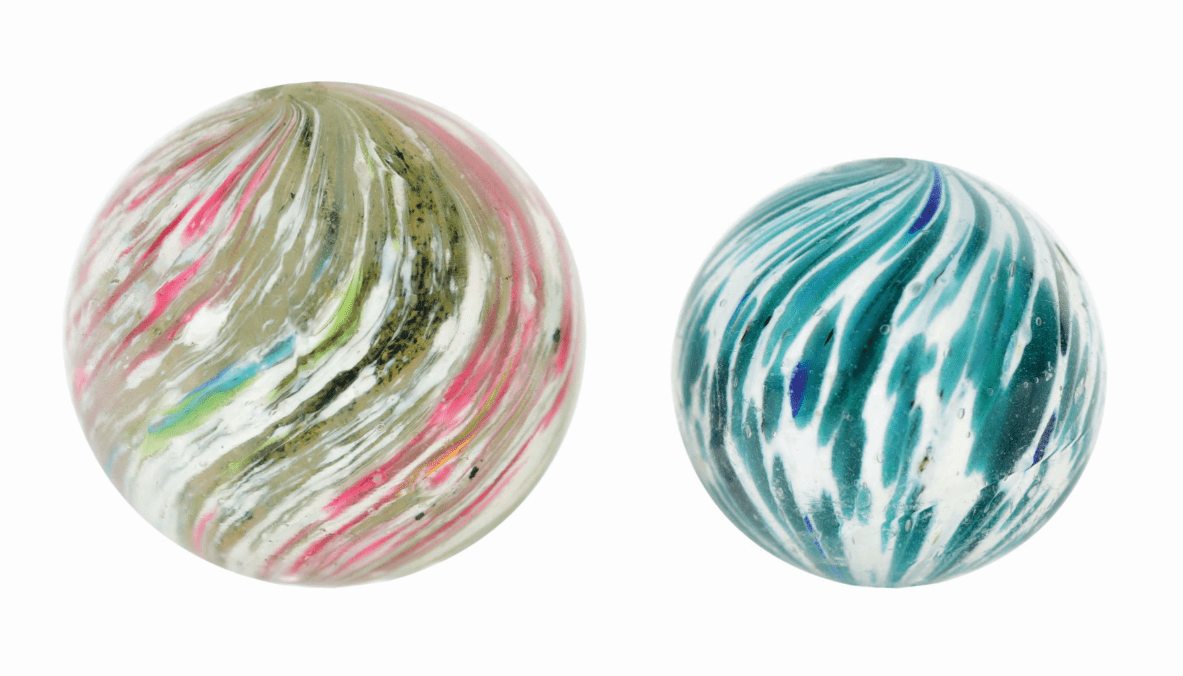 This auction lot comprised two different marbles, one slightly bigger than the other. The largest had a diameter of just over 1.5 inches. The smaller one measured  just over 1.25 inches.

They were both what’s known as onionskin marbles. Those are marbles that have a clear core that’s coated in a thin layer of base color. The base color is usually either yellow or white.

The smaller of these two marbles was white-based. On top of that, it had spotting of blue, turquoise and a little red.

The larger example is what’s known as a “ghost onionskin”. In this case, the thin layer over the core has no color at all. That one featured spotting in lime green, pink, white and a little turquoise.

The marbles were placed for sale together at Morphy Auctions in December 2021. Bidding opened at $300. When the hammer fell, they had made $660, including the buyer’s premium. 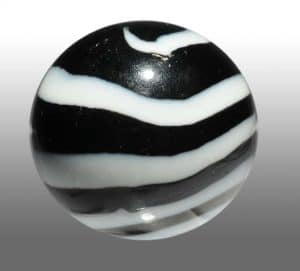 This striking marble in a black and white striped pattern was in pristine condition when it came up for auction.

It measured around 1.5 inches in diameter. And it wasn’t perfectly round, something you could see if you looked down at it from above.

Bidding opened at $500, but the hammer price was actually lower than expected. The marble had originally had a guide price of at least $2,000. In the event, it fetched just over $1,600. 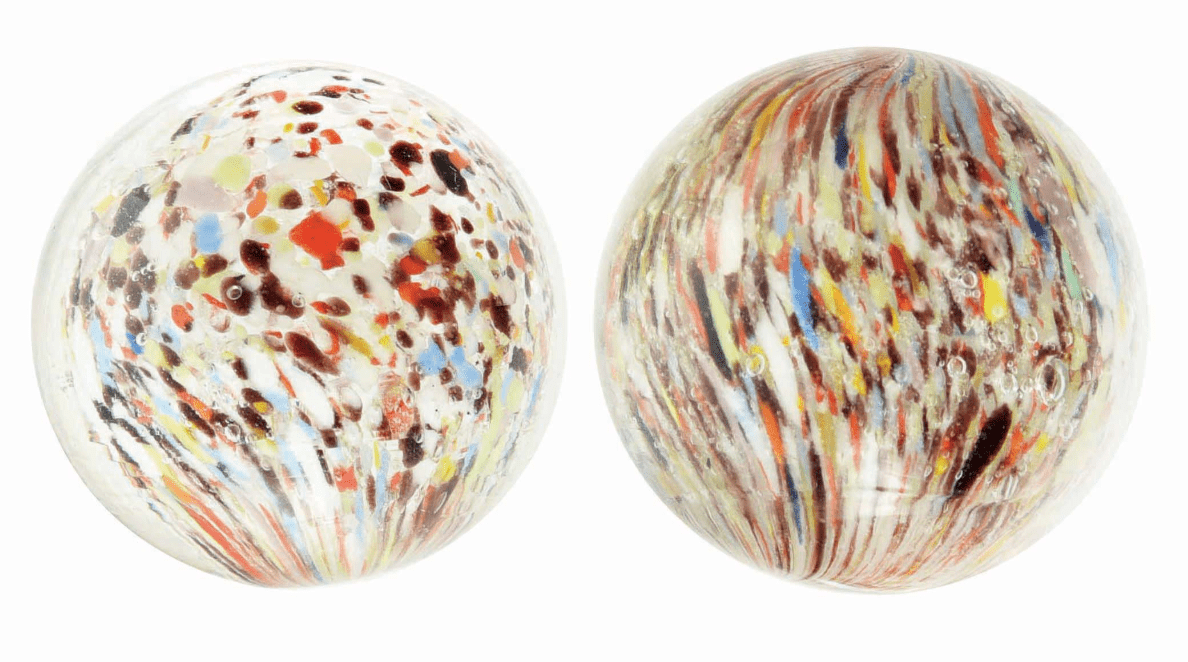 These lovely handmade marbles are from Germany, and they’re what’s known as “cane-cut”.

This time-intensive process involves rolling a clear glass rod over other rods made of colored glass. Those colored rods are nearly molten, and are known as “canes”. Another layer of layer of clear glass is then added, creating an inner core that looks like a net.

Next, the marble is covered in more clear glass, then rolled over the colored canes again. A final layer of clear glass is added before the craftsman shapes the marble.

All this work means that marbles of this kind can be very valuable. These two lovely examples also came in their original box. That was in near mint condition and bore the maker’s name: “Louis Muller’s Sohne, Glashuttenwerke.”

They came up for auction at the end of 2021, and sold for an astonishing $6,000 including the buyer’s premium.

4. One Yellow and One White Latticino Swirl $330 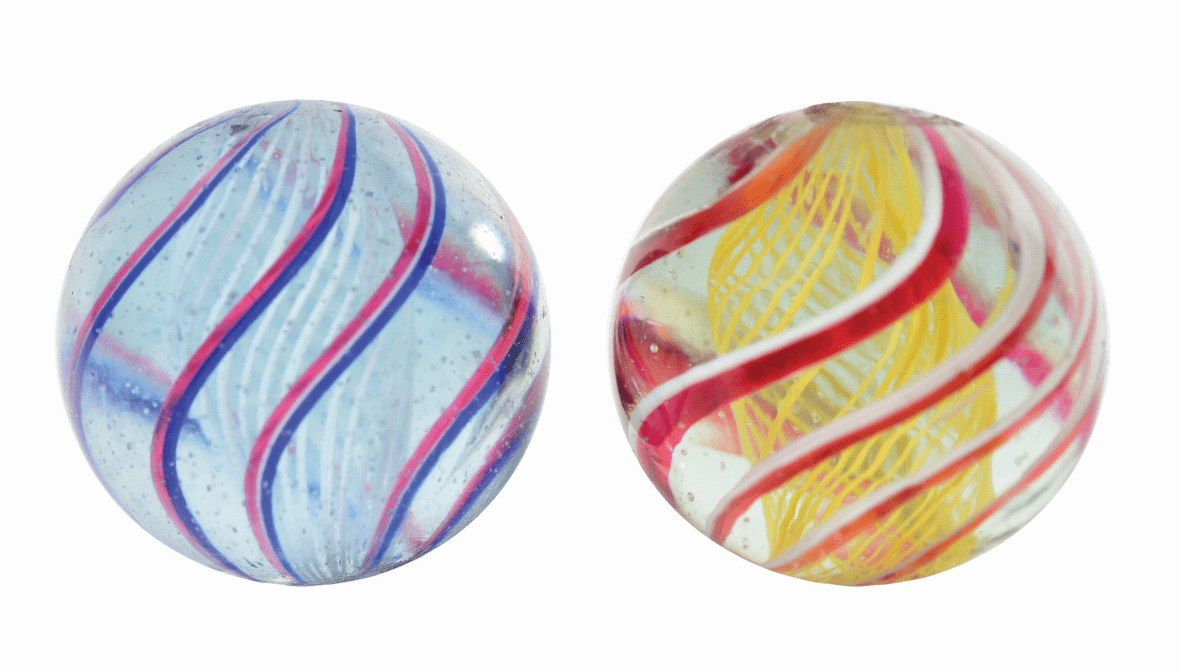 These two pretty marbles are German, and they’re made by hand from cut canes of glass. The designs here are what’s known as “latticino swirls”.

In this case, the glass has been pulled and twisted by the craftsman. The result is a mesh-like appearance at the center of the marble.

Both these examples were relatively large, measuring 1.75 inches and 1 and 1.8 inches respectively. Their condition was graded an impressive 9.7 out of 10. 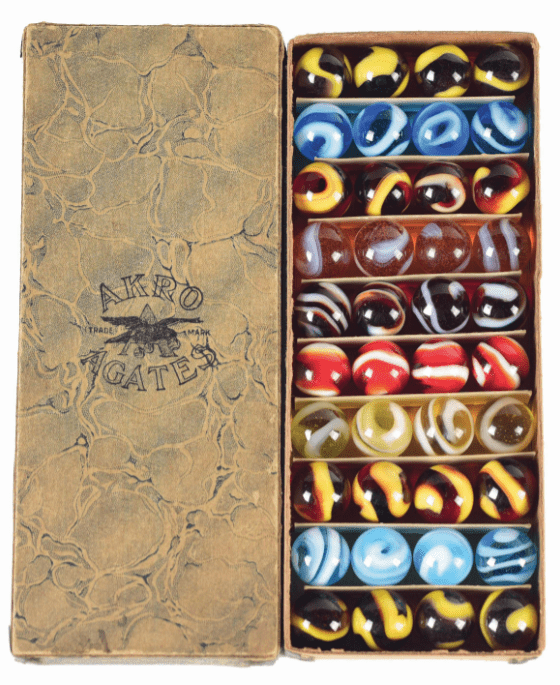 This wonderful collection of 40 marbles came complete in its original box. All the marbles are sorted by color, neatly lined up in rows of four. And the box itself is in virtually mint condition.

Each of the marbles measured 5/8ths of an inch in diameter. And they too were in very good condition, graded 9.5 out of 10 by the auctioneer.

The estimate when they came up for auction was $400 to $600. But fierce competition amongst bidders saw the price crash through that upper limit. The lucky buyer ended up paying $800, including the buyer’s premium.

In the 1930s an Illinois firm called Peltier began making marbles with images of comic figures. Three of those marbles came up for auction in December 2017.

One bore the image of cartoon favorite Betty Boop. Another was called “Emma”, while the third was “Annie”. Each marble also included a swirl of color, known as a patch.

And there was something particularly unusual about the patches on all three marbles. In each case, they covered part of the image of the character. This flaw meant they should have been rejected and destroyed – but somehow they survived.

That rarity helped them achieve a price of $215 when the auctioneer’s gavel fell. 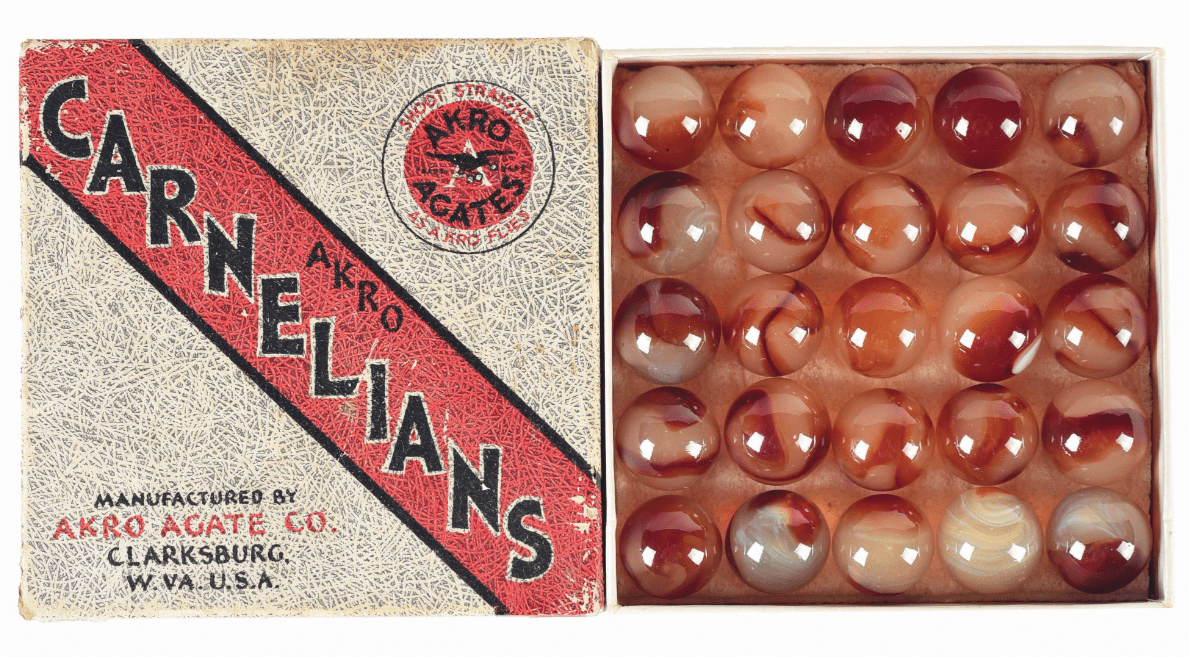 This boxed set of marbles from the firm Akro contains 25 marbles. Each has a diameter of 0.75 inches, and is a shade known as “carnelian agate”. That’s a warm rusty red.

The box had a little wear around the edges, but everything was otherwise in excellent condition when it came up for sale. The auctioneer’s report graded the set as 9.6 out of 10. 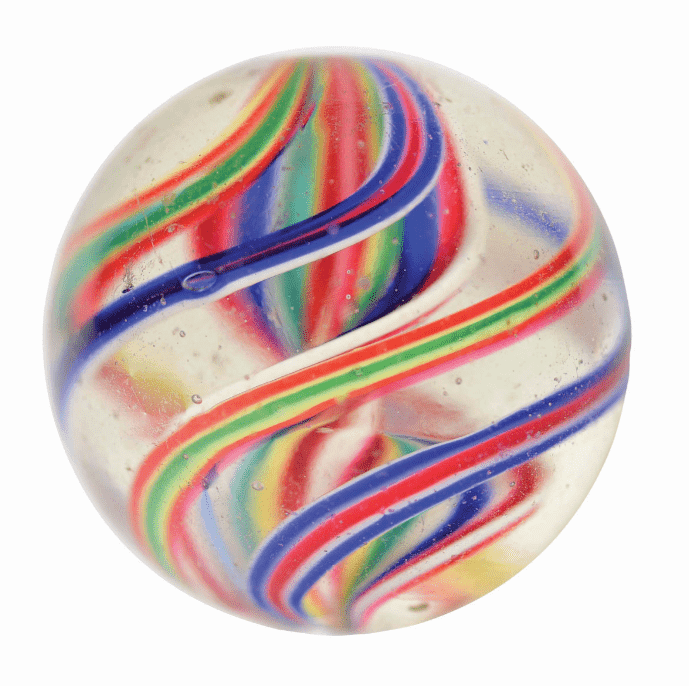 This beautiful marble sold in January 2021. It’s a type known as a “single ribbon swirl” and is very colorful.

The single ribbon – the colored part in the core of the marble – is made of bands of green, red, white, yellow and blue. There’s more color in the outer bands too. And the marble features an early faceted pontil mark, where it was detached from the glassmaker’s rod.

It’s an inch in diameter, and was in immaculate condition – graded 9.8 – when it came up for auction. It had been expected to make between $500 and $800. But in the event, it smashed through that estimate, selling for over $1,000 including the buyer’s premium. 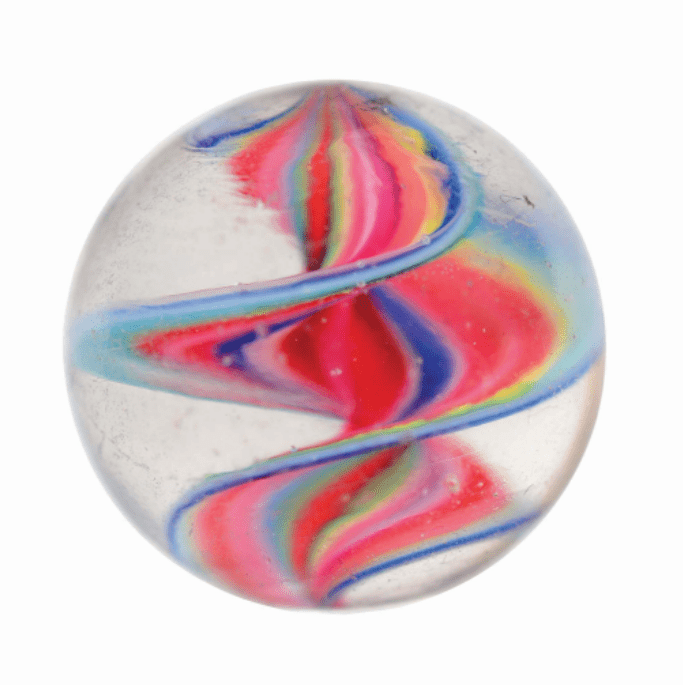 This lovely marble came up for sale in December 2021. It’s a type known as a naked single razo ribbon swirl. It’s beautifully made and was in wonderful condition, graded 9.8.

It measures 11/16ths of an inch in diameter. And it’s full of color, with the ribbon featuring shades of yellow, turquoise, blue, lavender, pink and orange.

It had been estimated to make between $600 and $800. But there was hot competition when the bidding opened. The eventual winner paid $1,320 to be its new owner. 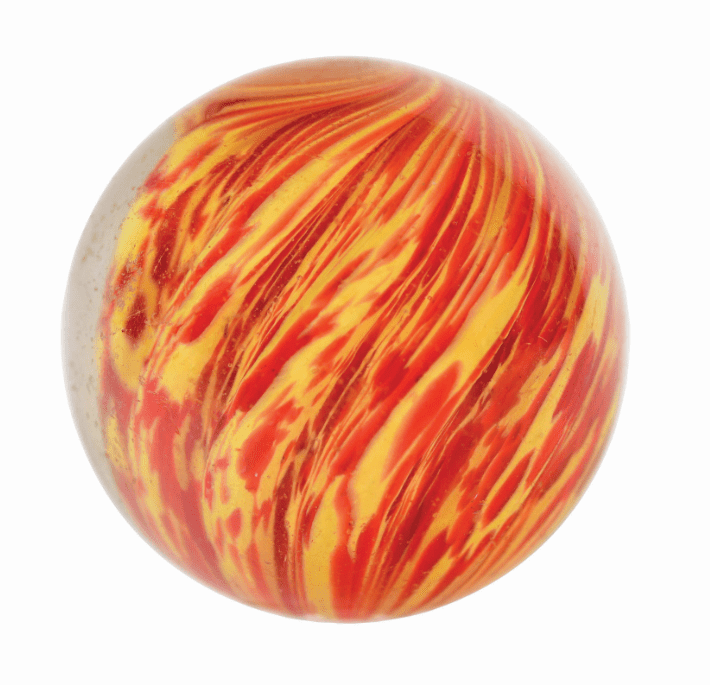 This is another lovely example of an onionskin marble. In this case, the base color is yellow. The spotting is red, and there are eight deep lobes. Lobed marbles are highly sought after by collectors, and marbles can have anything from three to over a dozen lobes.

This one is big too – 2.3 inches in diameter. And the pontil mark is well faceted.

But while the overall condition was good when it came up for sale, there was a small chip from the surface – what collectors know as a “flea bite”.

Perhaps it was this flaw that held back the price. It made a healthy $2,880, including the buyer’s premium, when it sold in December 2021. But the original estimate had been significantly higher, at between $3,000 and $4,000. 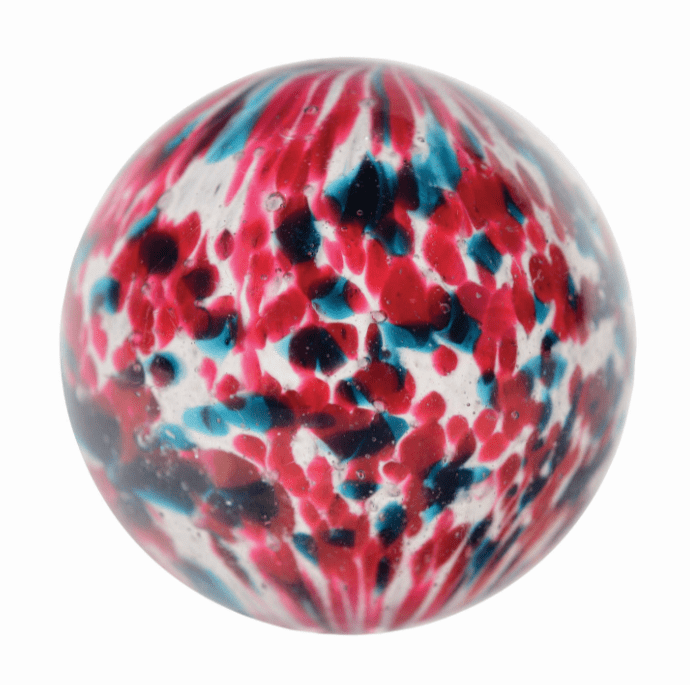 This is another large onionskin marble, measuring 2.25 inches in diameter. This one had a white base with attractive turquoise spotting and flakes of the mineral mica. And the pontil mark on the bottom was nicely faceted.

And in this case, the estimate was spot on. The final price, including the buyer’s premium, was $2,640. 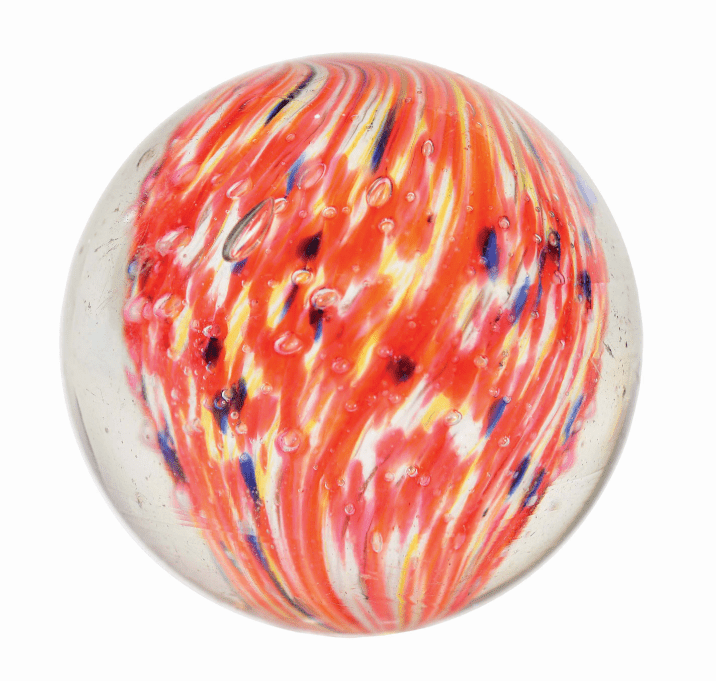 This onionskin marble has a flattened, oblong core – what’s known as a “shrunken core”. It has a white base with shades of red, yellow and blue.

The pontil mark is well faceted. And the whole marble was in excellent condition, graded 9.6. Just as importantly, it was exceptionally big, measuring 2 inches across.

All those features got bidders excited. By the time the hammer fell in 2021, the price had smashed through the estimate of $2,000 to $3,000. The eventual buyer paid a total of $4,800, including the buyer’s premium. 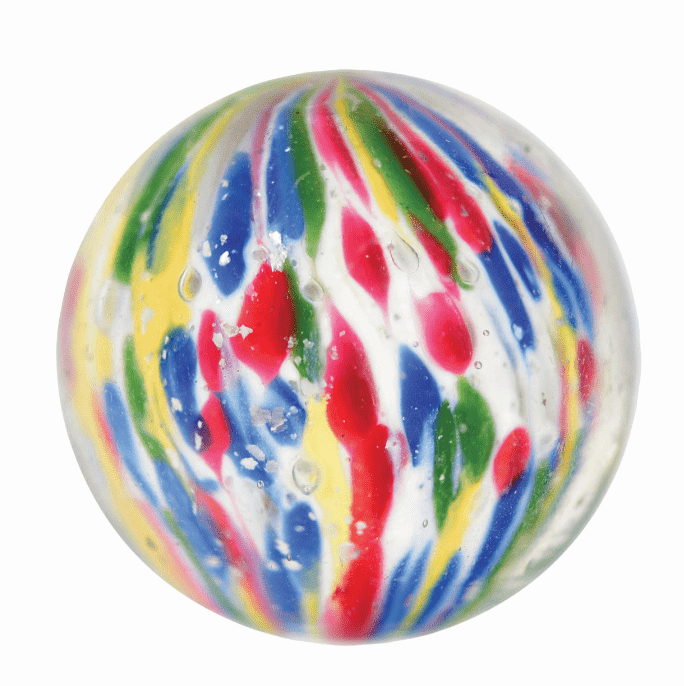 This colorful marble is known as a “clown onionskin”. And this one was also embellished with flakes of the mineral mica.

It had an early faceted pontil mark and measured a fraction under an inch in diameter. It was in exceptional condition when it was presented for sale – the auctioneers graded it 9.9.

As an unusual and attractive marble, it had everything going for it. Its pre-sale estimate was $2,000 to $3,000. But when the hammer finally fell, the price had risen to a whopping $9,600. This onionskin marble is very rare indeed. It’s what’s known as a “blizzard” formation, with suspended fragments of shimmering mica dotting the colored panel. The result is just as if a colored marble had been caught in a snowstorm!

It’s also very large – 2.17 inches across. And it was in excellent condition, graded 9.6, when it was offered for sale.

Its rarity meant it was a huge hit with collectors. It was the top-selling lot at marble specialists Morphy’s auction in March 2009. Including the 17 per cent buyer’s premium, it sold for $9,775. Mag Lite marbles are rare and distinctive. They’re made of dark glass, so dark that it looks opaque in normal lighting. But if you shine a bright light directly at them, the beam will pass straight through.

While all these marbles are rare, some colors are even rarer than others. Purple is found most often, followed by green and red.

This one, which came to auction back in 2008, was a deep cobalt blue. And it had outer bands in a range of other colors, including yellow, white, green, orange and purple. 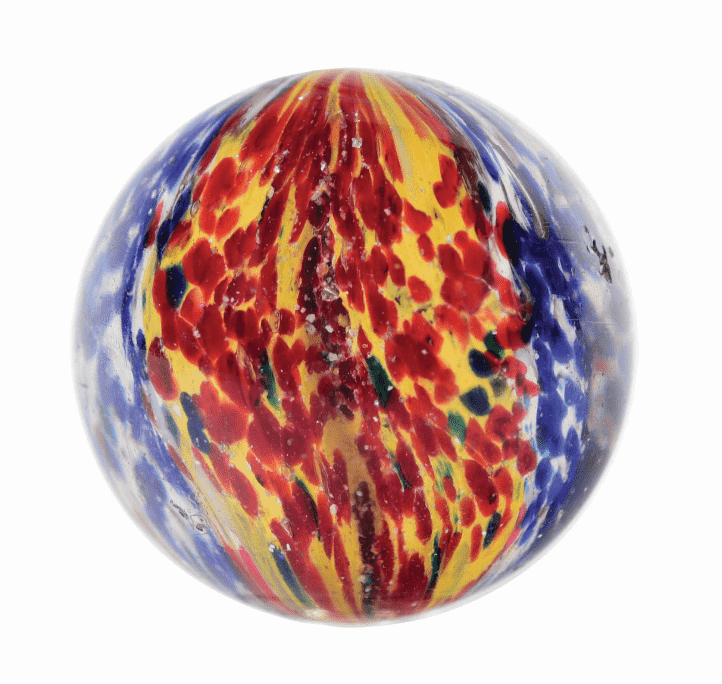 This large marble has four lobes and four panels of color. Two of the panels are red and yellow, with a little green. The two opposite are blue and white with a hint of turquoise. And throughout the marble, flecks of mica shimmer and shine.

The marble’s condition was graded at 9.1, with the auctioneer’s catalog noting a tiny chip near the top pontil. Nevertheless, its beauty and size – 2 inches across – meant it was hot property when it came up for sale. 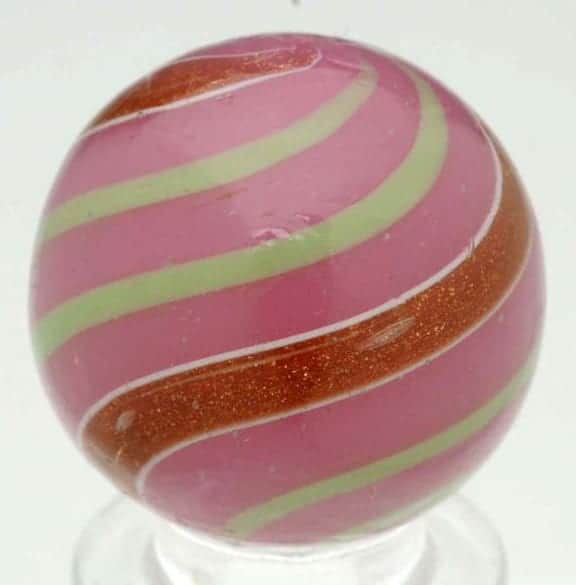 This amazing lutz marble is a real rarity. It was in excellent condition when it come up for sale, graded 9.7 by the auctioneers, Morphy. And it measured just under an inch in diameter.

But what made it so desirable was its color – pink with green lines. The specialist auctioneers noted that they had never seen this combination before. The pre-sale estimate reflected that – it was expected to fetch between $8,000 and $12,000.

But even that estimate fell far short of what happened on sale day in October 2012. The purchaser had to beat off a multitude of other buyers. And including the buyers’ premium, they ended up spending an astonishing $25,800 to take it home.

That’s the end of our look at 17 of the most valuable vintage marbles to collect. We hope you’ve enjoyed learning more about these incredible items.

And if you already have a lobed onionskin or pink lutz in your marble collection, handle it with care! It might be worth a serious amount of money.