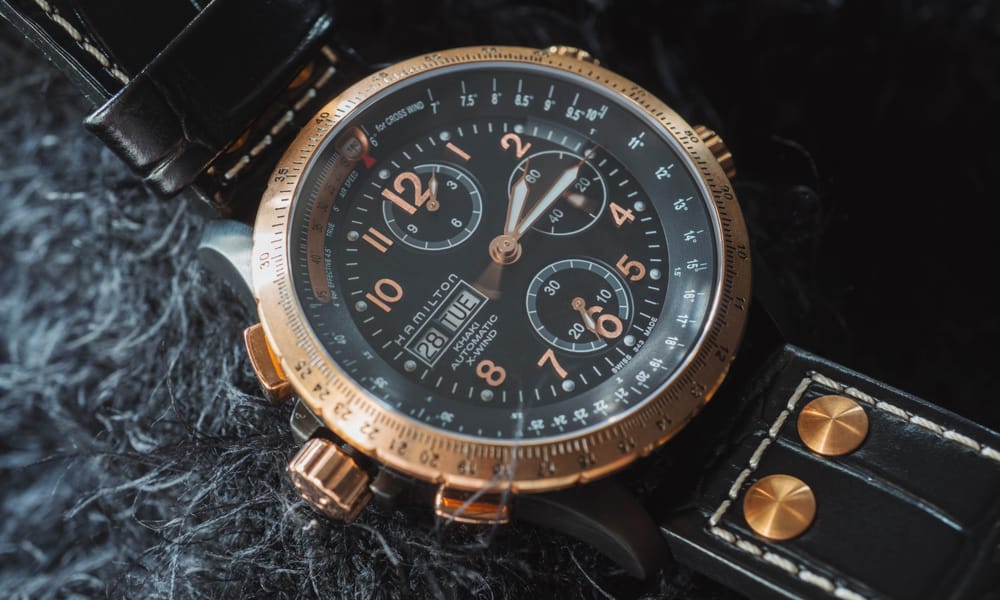 Vintage Hamilton watches are well-known for typical American design, including numerous models appearing in various configurations, shapes, diameters, and colors. Since they come in a vast price range, you can buy an excellent watch for less than $500.

The manufacturer designed watches with various features, and everyone can find an adequate piece regardless of taste and needs. For instance, the Hamilton brand included models for most airline, military, and railroad operators in the US and worldwide. 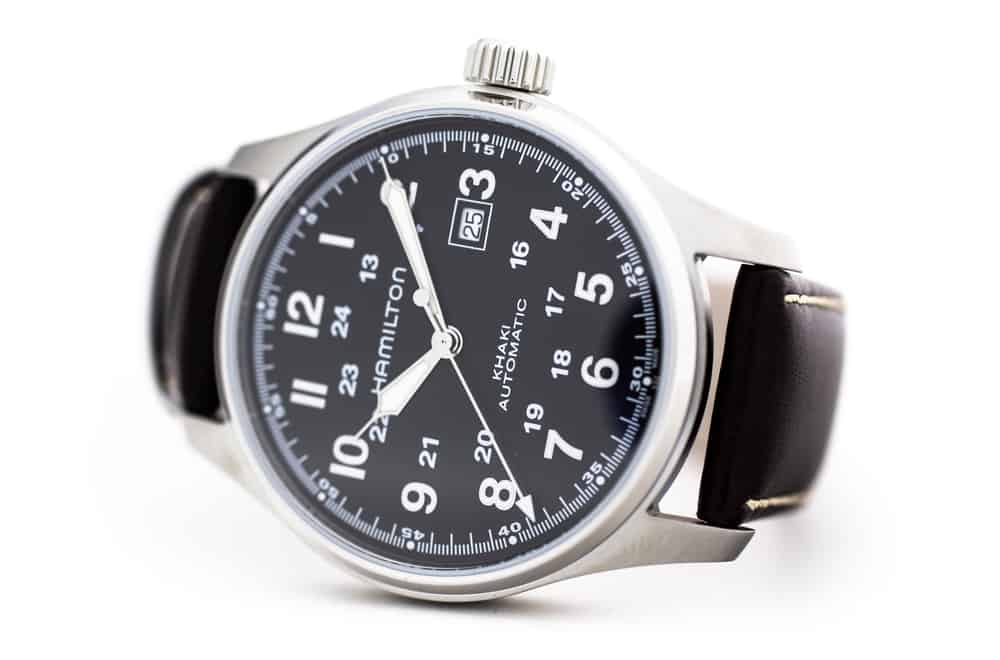 The Keystone Standard Watch Co. went bankrupt in 1892, and the owners sold their business to Lancaster businessmen. They united the company with the Aurora Watch Co. and founded Hamilton Watch Co.

The first commercial 18-size pocket watch appeared the following year with the best accuracy possible for the 19th century.

By WWI, the company managed to control over half of the watch market in the US. In 1917, they made the first 0-size men’s watch with 983 movements and seventeen jewels and the first watches for Ladies.

The Hamilton company gave its best to support the American troupes during WWI. After supplying the US military with precise watches, they became their official pocket watch manufacturers.

The returning troupes praised the wristwatches’ practicality, and Hamilton manufactured the first model for men with gold encasement. Unfortunately, their sales dropped to only $1.5 million during the Great Depression instead of $5.8 million earned before 1932.

Hamilton recovered in 1941 by selling watches worth $9 million. In that period, the company introduced a new, 16-size Broadway limited-edition model with seventeen jewels.

After WWII, the company started producing custom-made watches for Airline corporations and stopped commercial production. They created the first electric watch in the world in the mid-1950, but the entire production facility was sold to Swatch Company from Switzerland in 1969.

It can be tricky to start the Hamilton watch collection because of the numerous different models they produced. Luckily, you can find a brand’s name on the dial, and the only thing to do is identify different styles.

You can start with their luxurious watches trio with recognizable enamel bands around dials that includes: 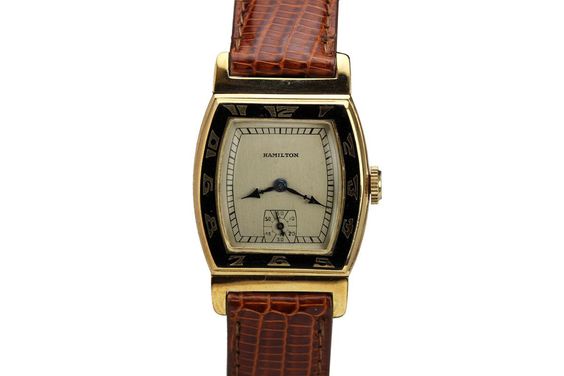 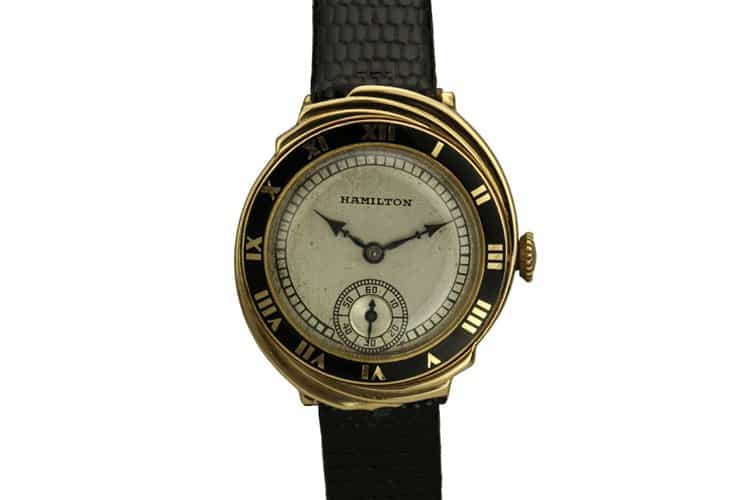 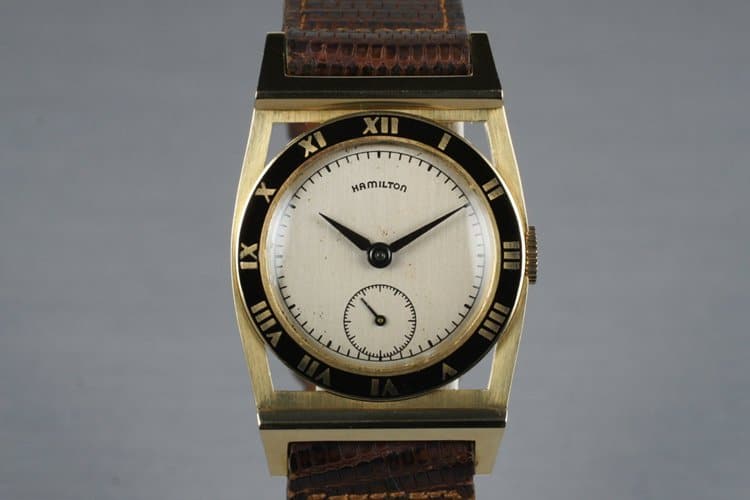 The rarest model is the Piping rock watch. After winning the World Series in 1928, the company gifted them to baseball players from the New York Yankees. Nowadays, each of these 35 pieces is worth a small fortune.

Also Read  How to Clean Rust off Antique Cast Iron?

Besides the famous Military Watch with Khaki straps produced for American troops and Railroad pocket watch with 10 K gold casing, the company became famous for a few extraordinary models: 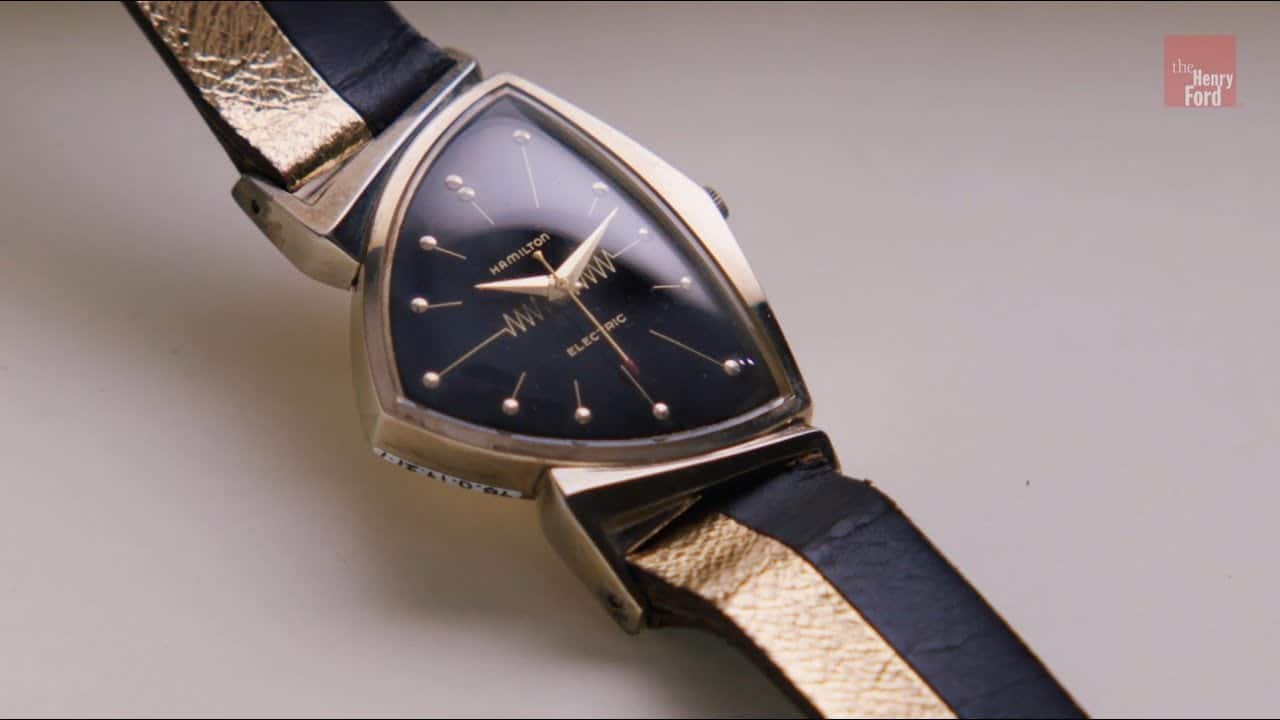 Hamilton created this unique watch with a shield-shaped dial in 1957 as the first electric wristwatch the company produced. It immediately became trendy, and even Elvis Presley wore it in the Blue Hawaii movie. 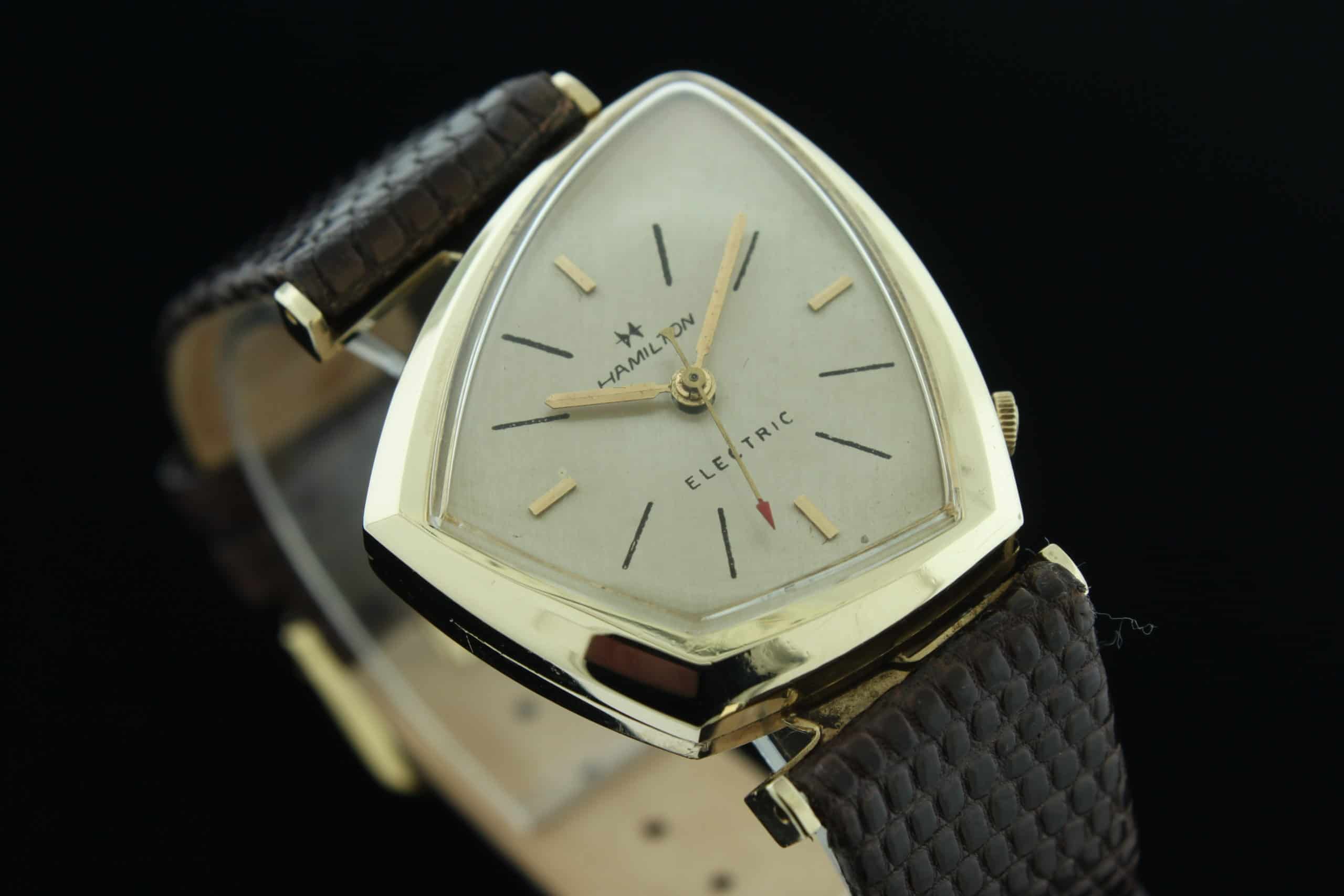 Another model is an electric watch with an asymmetric case manufactured in the mid-20th century. The company made only 1,600 pieces in two versions, with leather and metal bands. They are typically worth about $3,500 on the current market. 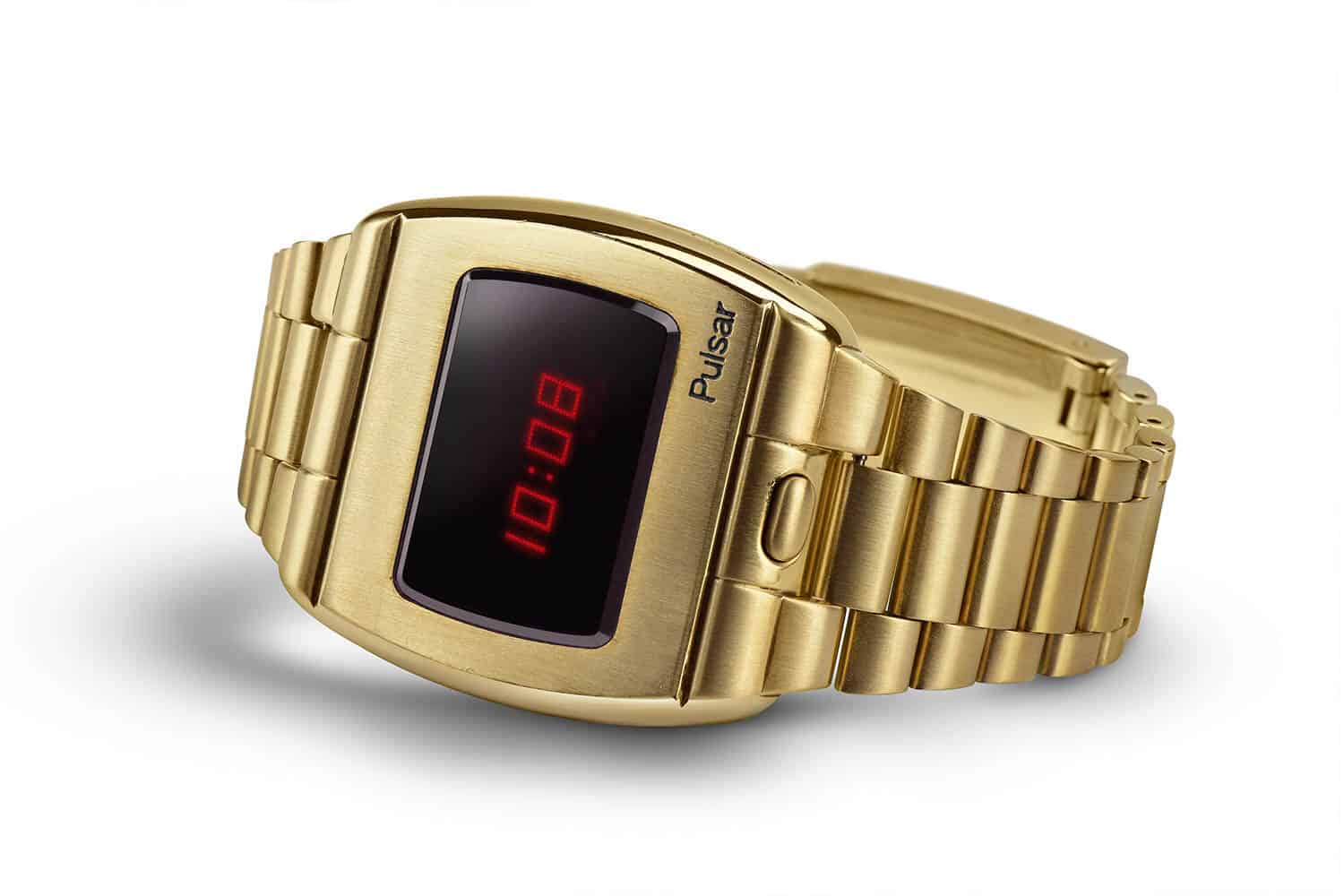 The Pulsar watch appeared in 1970 as the first model with a digital LED display. It featured a metallic band and bright red numbers and was good enough for James Bond, so Roger Moore wore it in the movie Live and Let Die.

This futuristic piece is rare nowadays, so you should pay over $2,500 for it. It is a modest price for a favorite US President Gerald Ford’s watch, right? 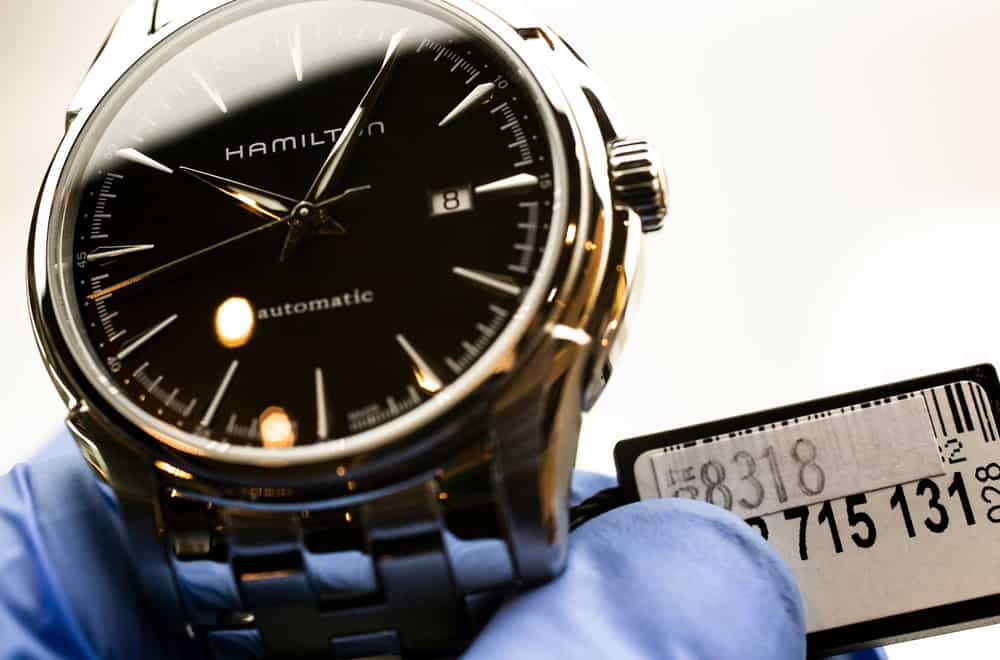 Since the Hamilton Watch Co. created its products in multiple designs, their identification can sometimes be challenging. Therefore, you need to pay attention to particular details to identify the desired model without mistake.

For best results, it is crucial to have the necessary equipment, including:

Now, let’s see what to inspect.

All Hamilton watches produced from 1893 to the late 1960s had the company’s name visibly etched on the dial. After that period, you can see only the letter H in the same place. Another characteristic is a second mini-dial placed next to number six.

You can also notice a winder on one side for occasional hand adjustment.

You should look for three numbers while inspecting vintage Hamilton watches. Besides, the inner case’s part contains Hamilton’s name. Be careful with movements since watchmakers sometimes imported them from other manufacturers.

Therefore, the sign HAMILTON MOVEMENT doesn’t mean this company produced the entire watch. There is one more thing, the so-called cushion system. Hamilton watches made in the 1940s contained movements from the 1920s.

Always check the movement when looking for the serial number. Be careful because any bond signs indicate the watch has been restored.

As for the straps, the company used gold chains, khakis, and steel types, depending on the watch model. Most are still in excellent condition, adding value to each piece.

Vintage Hamilton featured a screw case or a snap on the backside. You can recognize five designs produced by 1929, including:

All models in the same model group came in the same shape, case, dial, and movement style. Besides the oval, all other designs were trendy in their era.

Hamilton watches are recognizable for accurate timekeeping. A typical vintage Hamilton watch will cost you $150 to $2,150, but you can find more or less expensive pieces, depending on their quality and preservation level.

The average prices will depend on a few crucial features. For instance, you should avoid restored watches and those with other brands’ fittings.

The first thing to look at is a dial. You can expect to see serial number fading, markings discoloration, and slight stains on old models’ surfaces. Pieces in immaculate condition are probably restored, decreasing their value.

Even though the oldest models are the most expensive, you should also pay attention to the company’s ultimate models manufactured from the 1940s to the 1960s. The timetable of certain watches’ appearance looks like this:

You can classify vintage Hamilton watches into condition groups based on the Antiquorum Auctioneers System:

You can also determine these watches’ value based on the condition level in percentage:

It is senseless to buy any of the vintage Hamilton watches that are not in working condition since the market is overwhelmed by excellent pieces.

Most vintage Hamilton watches still exist, thanks to their top-notch quality. For instance, the Martin model is affordable.

On the other hand, you should set aside approximately $200 to $500 for the Broadway Limited or Railway Special. The price typically depends on their condition. Only a few models from limited production will be costly.

Some vintage Hamilton watches will come with premium prices because of sentiment, particularly those owned by celebrities. One of these models appeared in a Shanghai Express movie in 1932, featuring Clive Brook and Marlene Dietrich.

It is estimated that Hamilton watches appeared in over 450 major feature films. As I have already mentioned, Elvis Presley wore a Ventura model in Blue Hawaii.

Years after, Matthew McConaughey wore Khaki Pilot Day Date in Interstellar, while George Clooney had Hamilton Viewmatic in Ocean’s Eleven. Even James Bond (Roger Moore) in Live and Let Die enjoyed the Hamilton Pulsar. As you can guess, these pieces have an additional value for collectors.

Hamilton was probably the first watch for most Americans. This brand offered high quality at an affordable price, so it was a preferable option for US airlines, military, and railroad operators.

In most cases, you should set aside $500 to $2,000 for a model made of superior materials, making it a top-quality piece for decent money.