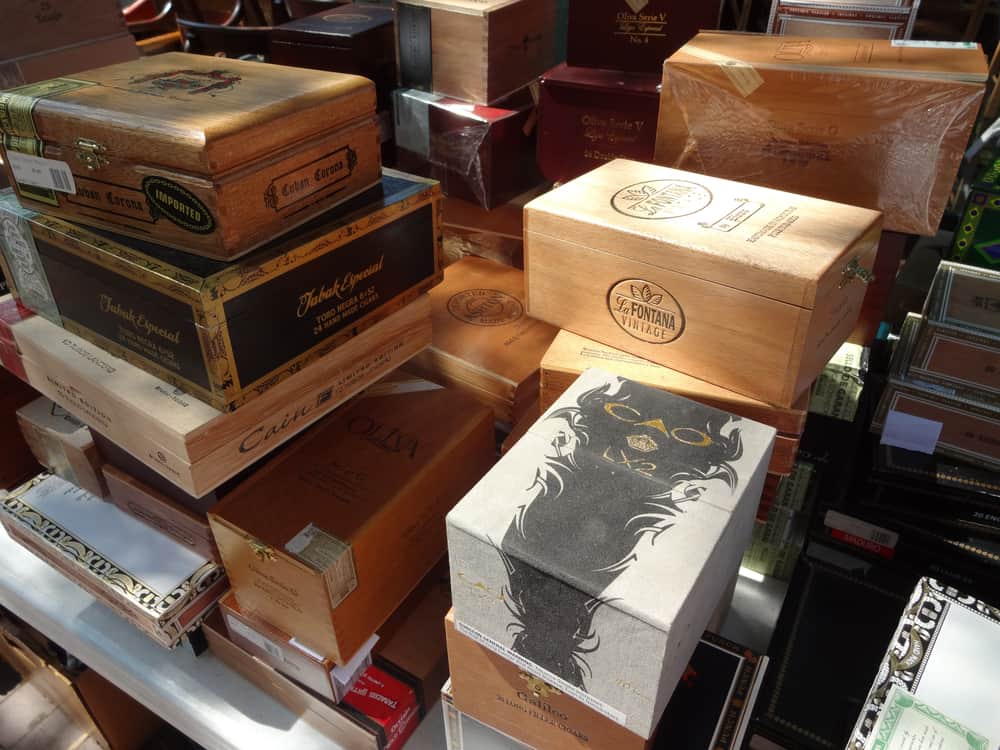 Cigar boxes are some of the most distinguished, stately, and undervalued antiques.

Found everywhere – from old drawers and in attics, in yard sales and auction houses, these tiny boxes were important marketing devices for tobacco companies.

Nowadays. many people mistakenly use them as small containers, not realizing the huge value of a cigar box.

Today we’re going to explore just how valuable your cigar box can be. From identifying the different styles and types to finding out what profits they can fetch at auction!

Although they all served one purpose, cigar boxes came in many different styles. Let’s take a quick look at the most common type of box on the market:

As men were the primary customer of tobacco, it made sense that sport was used to promote products, including cigar boxes. Boxes used famous sports stars and popular action scenes to entice customers. 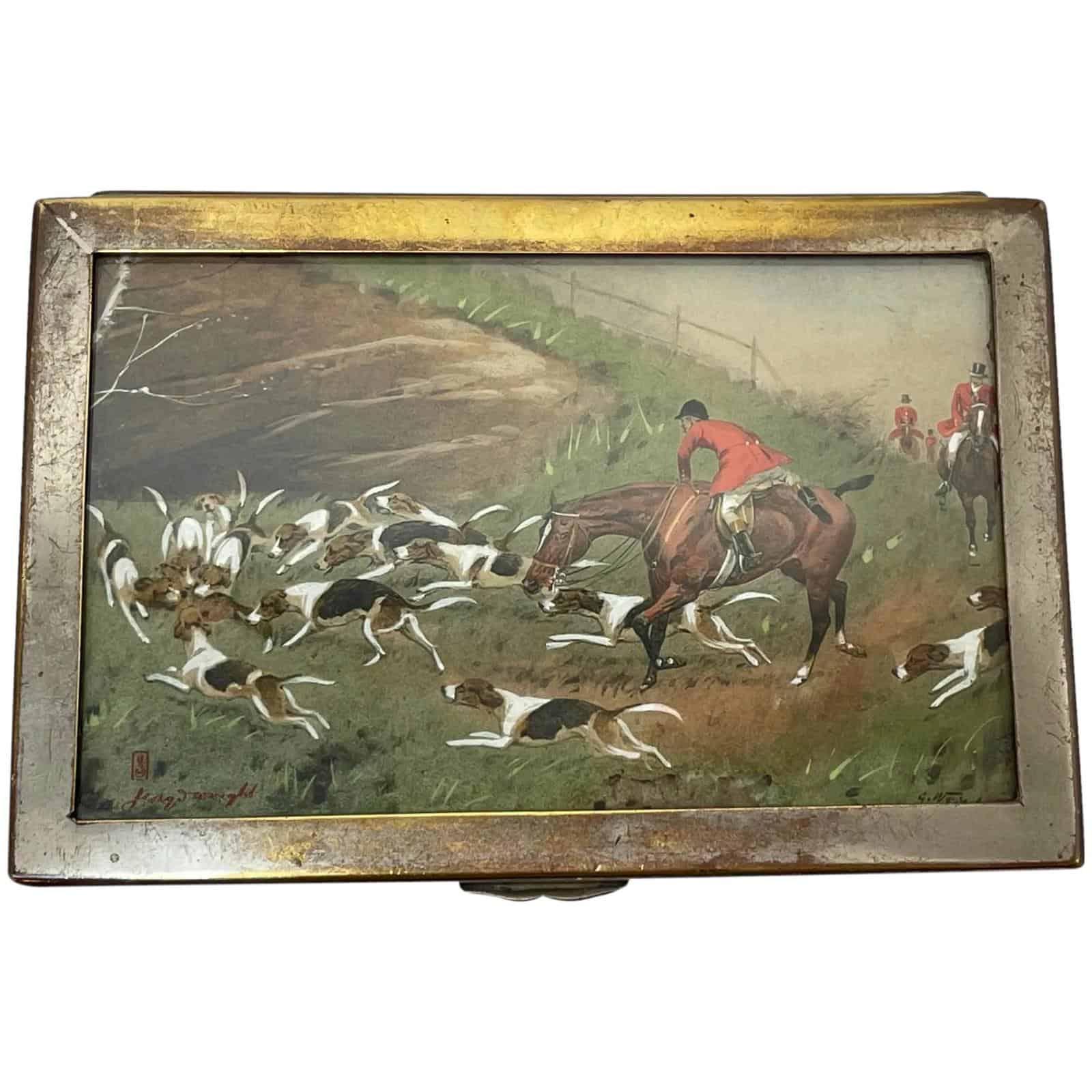 The car industry truly took form in the 1890s. Again, to target more men tobacco companies used this new interest in transport to sell their wares.

Boxes used famous brands to capitalize on this interest, and also began experimenting with shape – using car and train models as a template design. 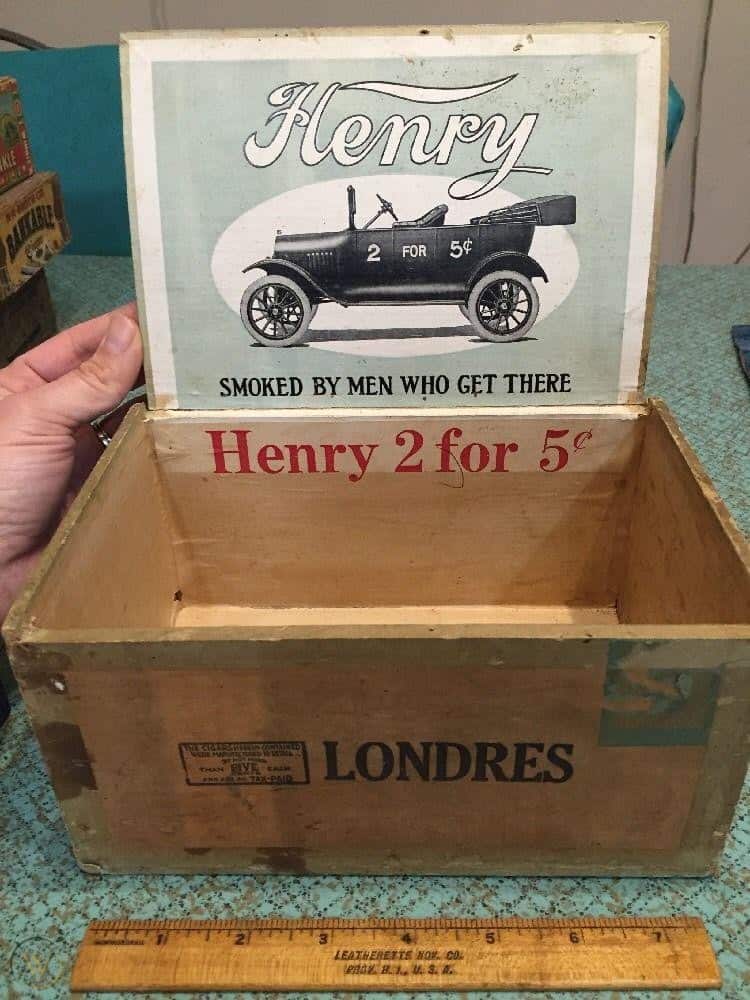 Realizing many women may be unhappy with their husbands smoking, cigar boxes became more artistic. These beautiful boxes could be repurposed as jewelry boxes. 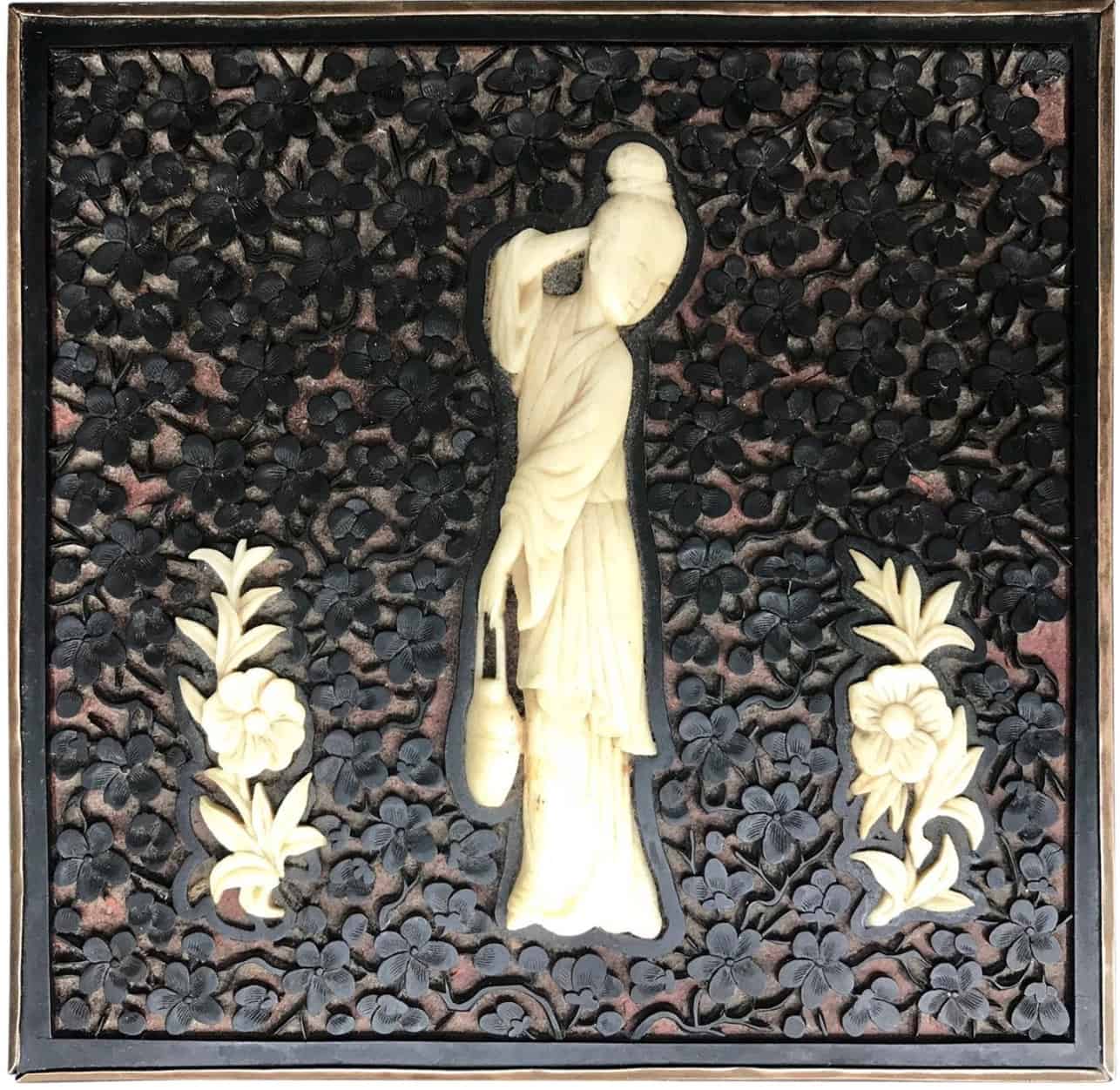 This art deco cigar box has intricate details and is worth $720. Cigars were a part of everyday life, so many boxes displayed everyday scenes that caught the eye of ordinary men in society.

From bar scenes and gentlemen’s clubs to gardens and holiday homes. 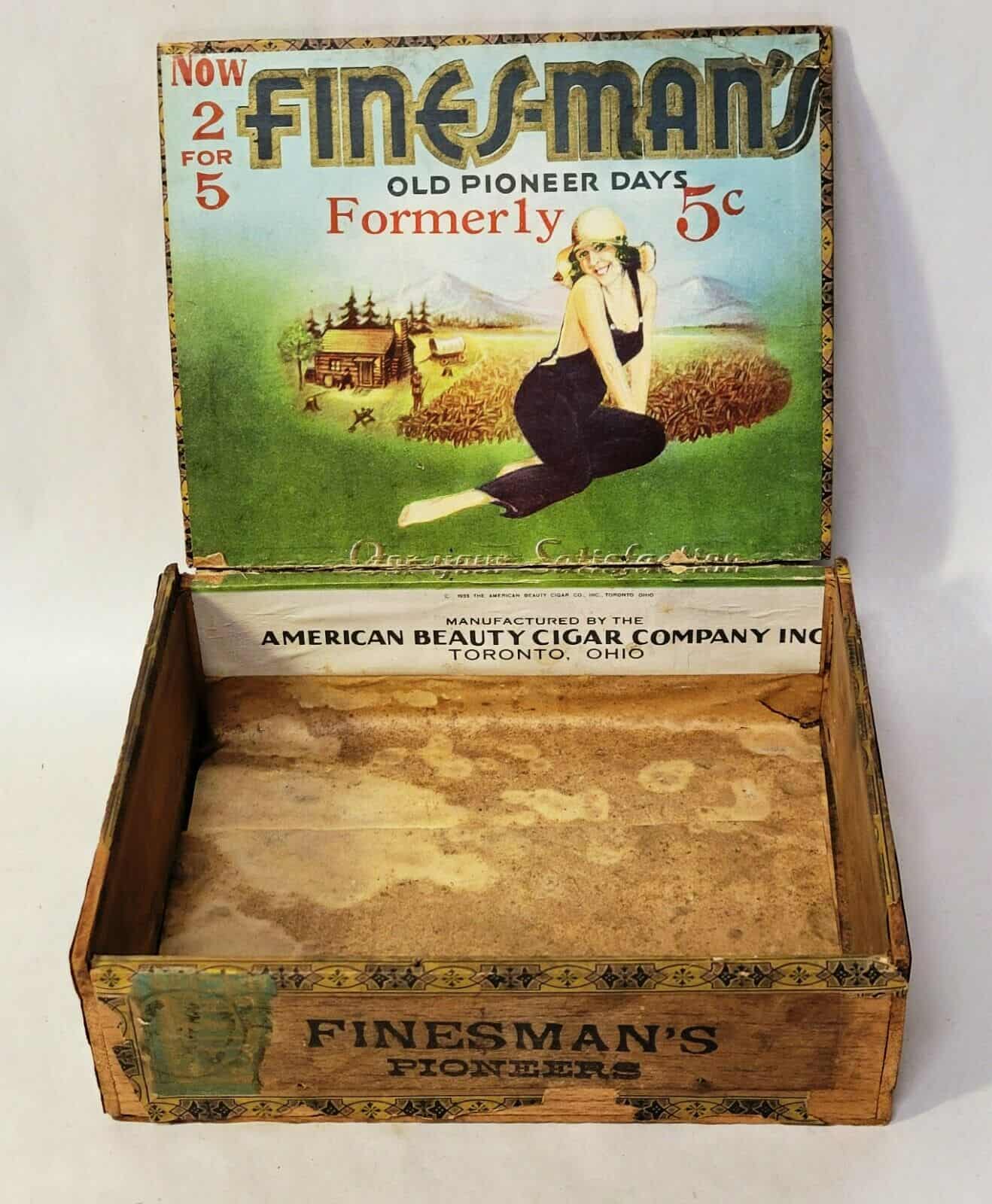 Owing to the rise and popularity of pip-up women, many cigar boxes began using sultry women as ads on lids For example this 1920s Flapper girl cigar box is worth $109. Cigar boxes often used popular politicians and celebrities to endorse their products. Depending on the condition of the box, these can be highly collectible. 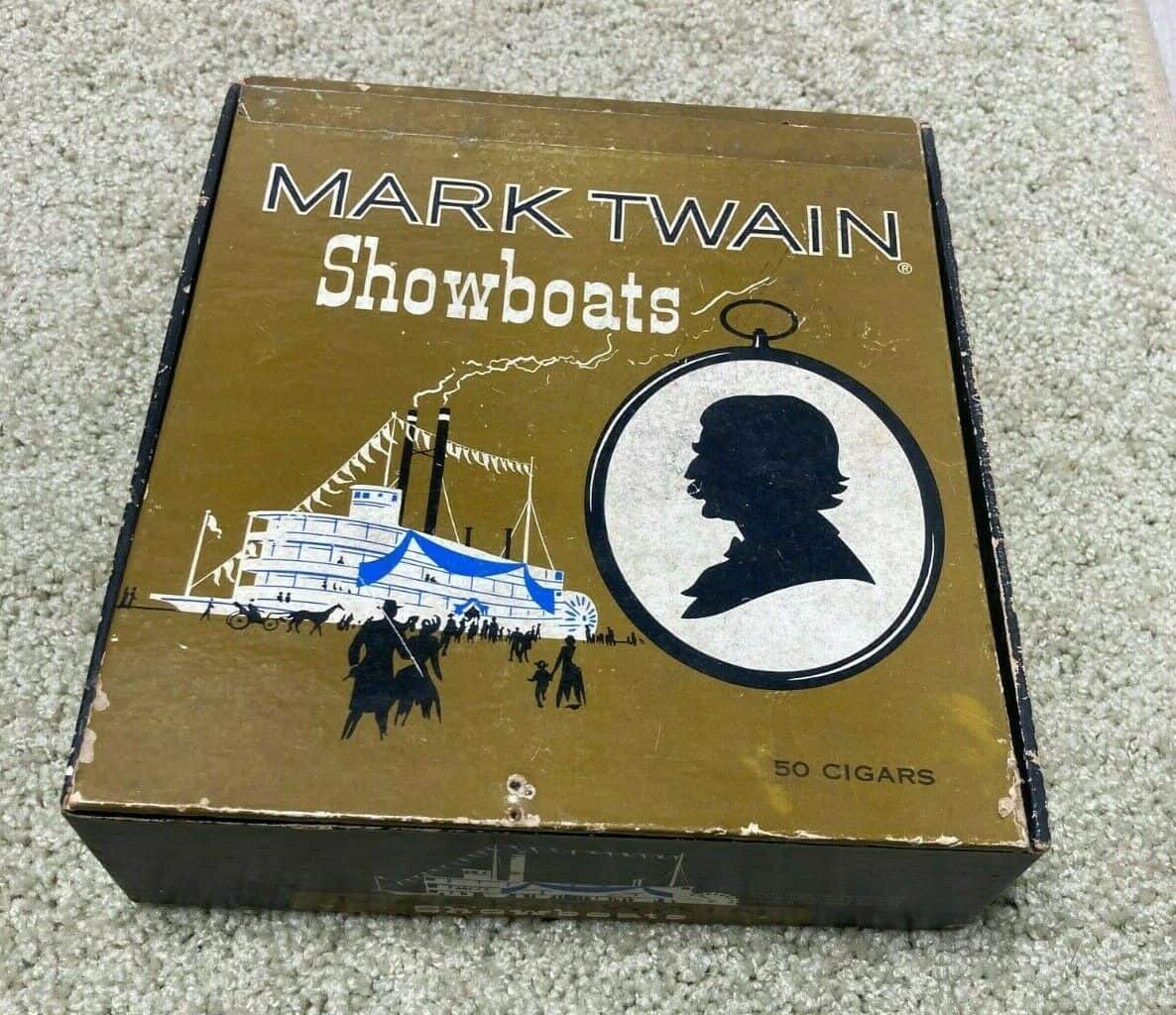 Finally, pets and animals were other popular styles of cigar boxes. From family pets like dogs or cats to horses, tropical birds, and more. 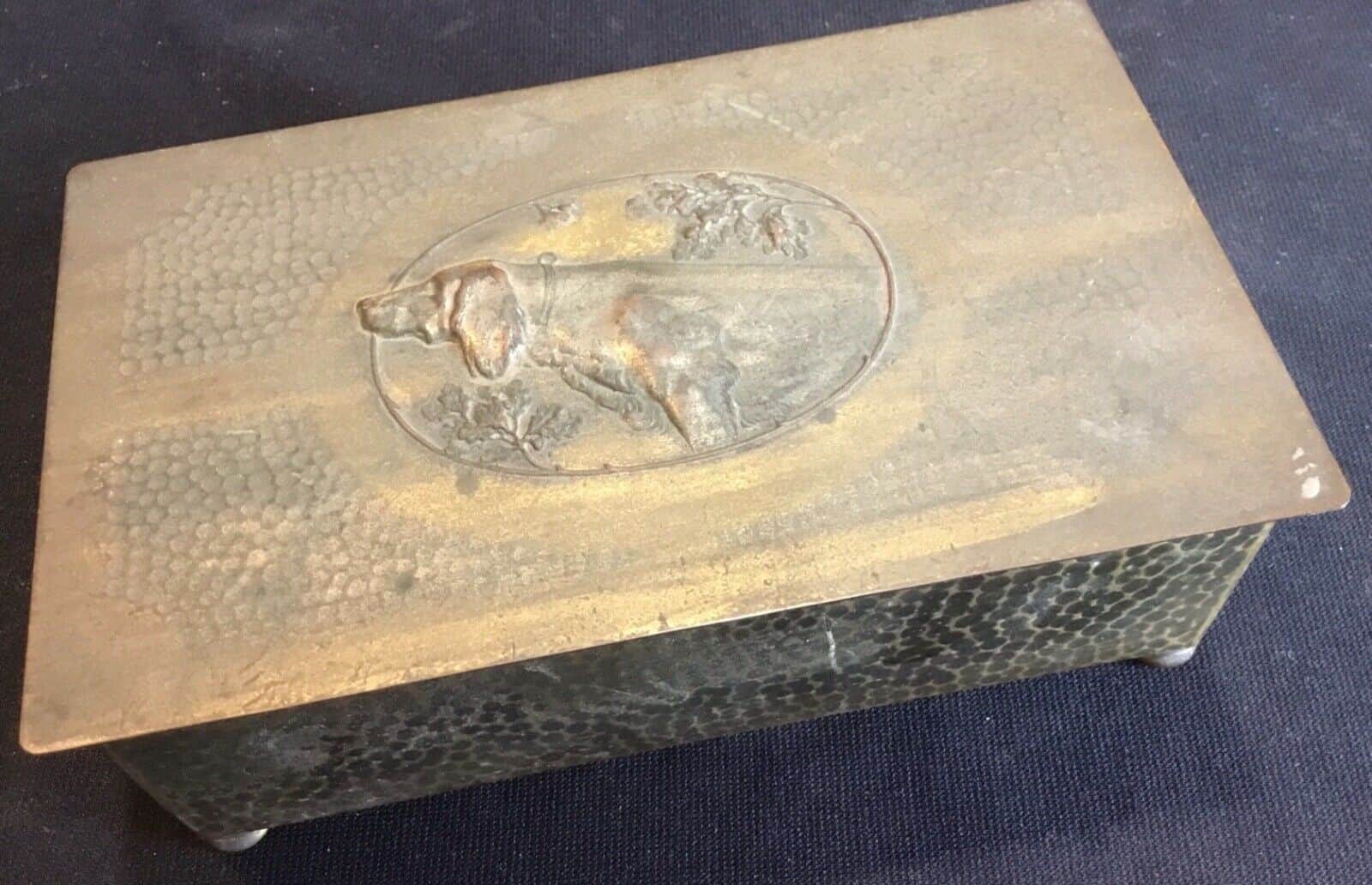 What can you do with antique cigar boxes?

Cigar boxes are a versatile little antique. Customers could repurpose them in many different ways. Nowadays, people buy antique cigar boxes for the following reasons:

How to date cigar boxes

Manufacturers spent large resources designing attractive containers to sell their wares. There are some ways of further identifying cigar boxes post-1854. These include:

Tax stamps changed throughout history and can be a useful way of dating your box to specific eras. They helped regulate the sale of tobacco and varied in color, font, and style.

Some marked important changes in the world, such as the Abraham Lincoln assassination or the World War 2 war effort.

The type and subject matter of the label

Examining the style and make of the label can help you date the cigar box. Some labels included the date of production or used a company’s branding.

Some key labels to be mindful of include:

Are old cigar boxes worth anything?

There are countless styles, designs, and brands of cigar boxes on the market. Because they’re so diverse, cigar boxes are highly collectible.

In the right hands, they can fetch a small fortune at auction. Let’s take a look at various factors which can impact the value of your prized cigar box:

Wood was the most popular material used to create cigar boxes. It is also quite cheap, and with all things antique, cheaper materials mean lower value.

That said, some types of wood were particularly rare than others, and have decent values nowadays. Examples include:

In addition to wood, there were several other materials used throughout the late 1800s and 1900s to make cigar boxes. These included glass, aluminum, and brass, to high-quality expensive china and sterling silver.

Although age isn’t the deciding factor of a cigar box’s worth, the older it is, the more likely it’s valuable. Because cigar boxes became mandatory in the 1850s, any boxes which date close to this time are considered antique and very in-demand.

Cigar boxes from the early 1900s will have been mass-produced. Mass-production means there are more of them on the market, and thus not as valuable.

A unique shape can increase the value and rarity of a cigar box tenfold. Some of these cigar boxes are considered one-of-a-kind, given their intricate details and pristine condition.

Some unusual shapes may even date the box to before the 1854 Revenue Act when box sizes were standardized. Some examples include:

Like any antique, the better the condition the higher the value. And even if you own a one-of-a-kind collectible, no one will buy it if it’s in poor condition and utterly unrecognizable.

Most cigar boxes are sold in ‘used condition’, with only minor signs of damage evident. The odd scratch or chip won’t take much value off your box. The box should be able to open and close without a problem and come with its original hinges and/or clasp.

The most common problem collectors face is with old wooden cigar boxes. They can suffer from poor storage and ventilation, where spores and disease can damage them beyond repair. Inspect your box for signs of mold, mildew, or moisture damage (warping & discoloration).

The most desirable cigar boxes often come with their original labels. A well-preserved label could turn a generic box into something much more interesting in the eyes of a cigar box collector.

Illustrations should retain their original color and was possible there should be no tears, rips, or stains. This Oil Man cigar box, for example, is worth slightly more than similar auctions because its labels are in such good condition.

Do remember that labels can be reproduced many modern manufacturers sell vintage cigar box labels separately.

Many cigar boxes have maker marks, i.e. branding, logos, or stamps which tell us who made the box.

Some collectors pay particular attention to specific makes of cigar boxes. Some noteworthy brands include:

Despite being small, many cigar boxes had elaborate designs, decoratives, and artwork printed or carved into them. Some of these designs make the box itself incredibly valuable.

Cigar boxes that had a limited production run are worth a lot more money to collectors, as they are in incredibly short supply.

An example includes a cigar box using the famous baseball player Hans Wagner. Wagner was unhappy with his image being used to advertise tobacco and is said to have pulled production of the box (and the accompanying baseball cards). It had an incredibly limited production line. The label alone can be worth over $5,000.

If you’re serious about selling vintage cigar boxes, you may want to invest in some reference material, research market prices, or seek a professional appraisal.

‘The Handbook of American Cigar Boxes’ by Tony Hyman is the industry standard when it comes to identifying and valuing cigar boxes.

Sites like eBay and Etsy can also give you keen insight into what customers are looking for, how stable prices are, and when to sell.