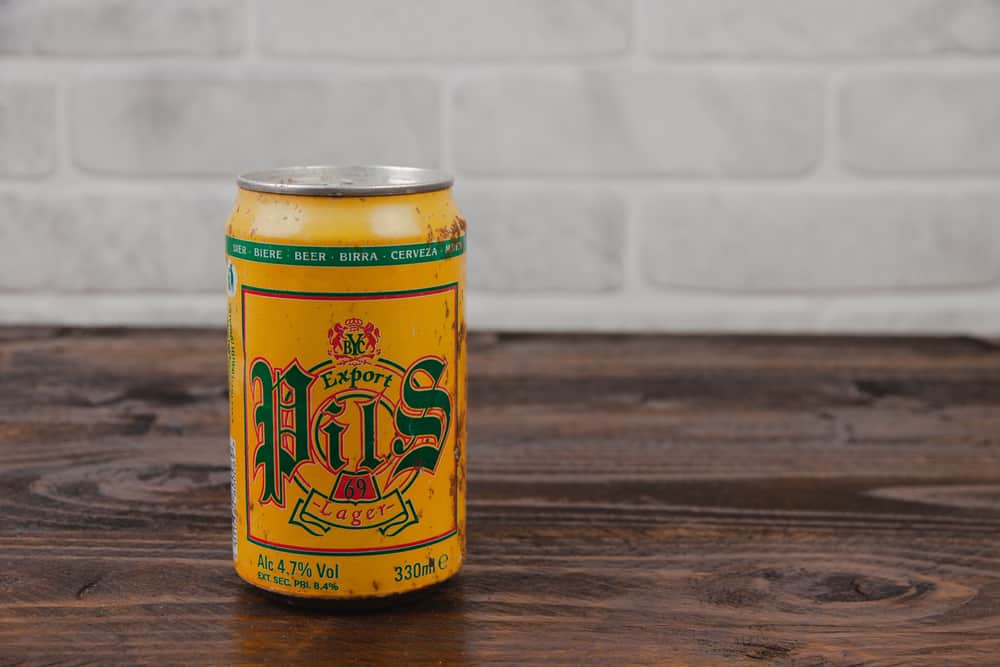 If you throw away your beer cans after drinking them, you will reconsider doing that after this article! Beer cans can be recycled, and used in various DIY projects, but they can also be collectible items. A beer can collection value might reach hundreds and thousands of dollars.

Collecting beer cans began as a fad for teenagers in the late 1970s, but it gained its momentum thanks to the rise in popularity of craft beers. Today, clubs like Brewery Collectibles Club of America count more than 5000 members interested in collecting valuable and vintage beer cans.

Before we go over some of the most valuable beer cans, let’s see when did these beer cans first appear, and how did they grow to be so valuable.

Various breweries started developing the idea of canning the beer in the early 20th century, but the first company that successfully canned beer in 1933 was American Can, for Gottfried Krueger’s Brewing Company.

Soon, canning beers became widely spread, but not every brewery was able to replace their old bottle lines. As a result, the cone top can was designed in 1935. Cone tops allowed breweries to use their old production lines to fill cans with beer and seal them with bottle caps.

Because most manufacturers were focused on producing military equipment during WWII, beer can production was reduced to a bare minimum. After the world ended in 1945, beer cans slowly regained their popularity.

Beer cans were originally made of tin, then steel, until being replaced in 1958 by aluminum. This made them much lighter than the bottles or steel cans. In 1962, more beer brands preferred beer canning over packing it in bottles, and in 1969 beer can sales surpassed the sales of bottled beer.

Beer cans with cones were replaced by easy-open flat-top cans with pull tabs. Iron City Beer was the first to adopt these cans, and other producers followed suit, including Schlitz, who added the first finger lop to the can as well.

Falls City Brewing Company created the first fixed tab beer can in 1975, making drinking significantly safer by reducing the risk of swallowing small bits of aluminum. The fixed tab cans with pull tops remain in use until today, and even the soda cans now have fixed tabs.

What Determines The Value Of Beer Cans?

According to Steel Canvas, a store that specializes in old beer cans, the value of older cans is determined by three factors: rarity, desirability, and quality.

The value of old cans increases with their rarity and rare cans can be worth a fortune. The more common cans, such as Billy Beer cans, have little value to sellers and collectors because they were collected by many people and can be found almost anywhere.

Cans that are still in pristine condition will be more valuable than those that are covered in rust or have other damages. Vintage beer cans are frequently classified from Grade 1+ to Grade 5, with Grade 1+ indicating perfect cans and Grade 5 indicating cans that are barely identifiable.

Here are the top 15 most valuable beer cans, sorted from most costly to least expensive:

The can is still in a pristine condition, and it has interesting features, such as a cone top with a bottle cap, and incredible graphics that sit on a black and gold patterned background.

This can’s colors are still vivid and popping. The can’s surface is smooth, and it still has its original gold finishing.

This beer can was produced by the American Can Company for the Liebmann Breweries Company. It was produced in 1937, and it is in almost perfect condition.

4. The New Yorker Beer Can

The New Yorker Beer Can was sold in 2019 through the Live Auctioneers Website. It has a vanity lid and is in good overall condition. The graphics on the can feature the 1940s New York skyline, which makes this beer can a valuable collectible.

Gunther’s beer can was produced by the American Can Company in 1935. It has the first label design and was a part of the prototype. This beer can also comes with its original permit and a patent-pending statement linking it to the Jim Plant Collection.

This 12 oz beer can was produced in 1937 for A.B.C. Brewing Corp., and it still has its original bright colors, although several sections have faded slightly.

This is the only beer can on the list that’s not vintage. In fact, it was produced in 2022. The reason behind the cost of this beer can is that finding it qualifies you to enter a competition for a chance to win $1 million! however, only 10,000 of these cans were sent to the market.

These cans were often auctioned and some of them reached a price of $8,500 at one point. Only one of them actually won the lottery, but the other ones could be worth even more in the future because of their interesting backstory.

This cone-top beer can was at first offered for $334, but it was auctioned for $1,180. The year of its production is unknown, but it is obviously one of the oldest beer cans in the world.

This can is in excellent condition, with beautiful red color and golden background. There are no major scratches or dents.

Although it shows noticeable signs of wear and tear, this flat-top beer can is one of the rarest cans in the world and its value is estimated to be $900.

It was made somewhere in the 1940s, and the label had gold, green, and copper-colored writing, which remained well-preserved until today.

The label on the can is still intact and contains every detail, despite the rusted cone top.

The exact age of this beer can is unknown, but it was recently sold at an auction for $787, although it was listed at $410 before the auction.

Because cone tops are older and rarer, they will always be more valuable than flat tops. Especially when they’re in as good shape as this beer can.

This beer can was sold for $399 at an auction. Its exact age is unknown, and although it is more damaged than most other cans on this list, this beer can is still highly valued.

Budweiser Bock Beer flat-top can comes in stunning red color decorated with gold bands. To open this bottle, a church key was used, which created a triangular notch on top of the can.

Anchor Export Beer can was produced sometime in the 1950s for Hull Brewery Company based in Yorkshire England.

It is in a good condition, with its graphics still intact, although it shows some signs of wear and tear. Its price is estimated to be $334.

A beer can that will certainly attract attention, this Old Ranger beer can features a red bulls-eye painted on white background.

The exact production year for these beer cans is unknown, but they arrived on the market in the 1970s. Since it is in a good condition, this beer can was listed for $124.95.

This beer can is perfect for collectors that are looking for a well-preserved beer can but don’t want to break the bank when buying it. Its price is $79.99, almost free when compared to the other cans from this list.

It was produced in the 1950s and it is in a nearly perfect condition. It has an interesting design and a nice color combination.

Collecting and selling vintage beer cans is a great hobby that can really pay off if you are able to find an old beer can that is well-preserved, rare, and in high demand by other collectors. Such beer cans can range in value from a few hundred dollars to tens of thousands of dollars.

Do you own any vintage beer cans? If you do, what’s the rarest and the most expensive beer can in your collection? Write in the comments!