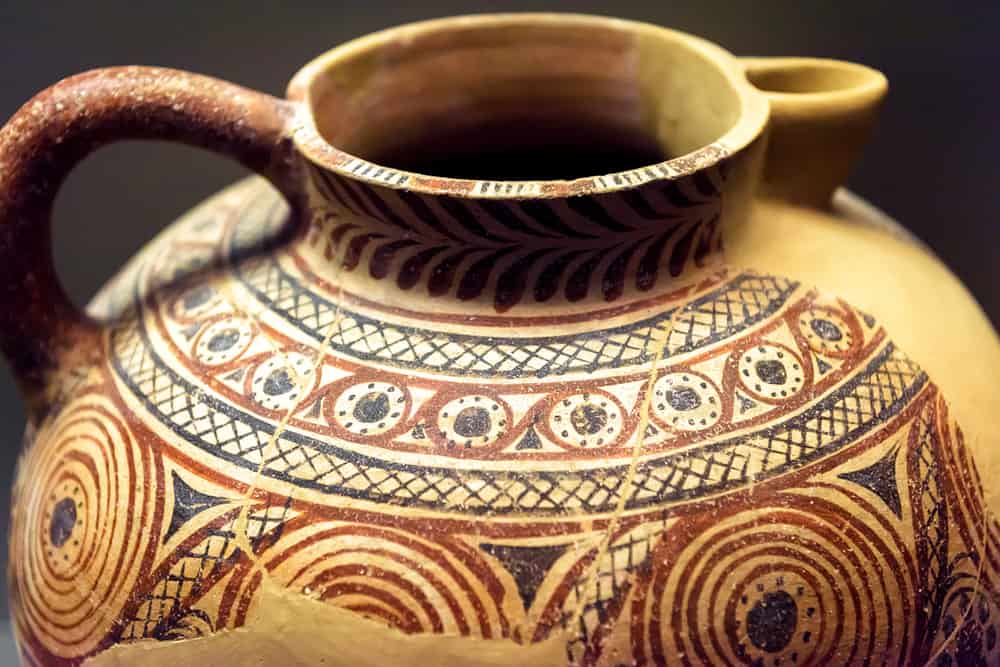 Whether it’s proudly on display on a kitchen shelf or tucked away in a dusty attic, everyone has at some point wondered – is my crockery worth anything?

With so much variety and lots of modern crockery taking up space, figuring out if your jugs, mugs and containers are trash or treasure can be difficult.

We’ve compiled an easy guide on how you can evaluate your crockery and identify if it’s worth parting with.

All about antique crockery

What Is An Antique Stoneware Crock? What were they used for?

Stoneware is a non-porous, ceramic material. It is both durable and water-tight, even before glazing, making it a great investment for any kitchen.

Before refrigeration, people needed ways of keeping things fresh. Crockery had a very important role in preserving and preparing food and had the important job of protecting perishables such as butter, jelly, salted meats and pickled vegetables.

Antique crocks allowed people to store summer vegetables throughout the year. However, towards the late 1920s, refrigerators became more popular and mainstream in American kitchens. Whilst crockery still proved a cheap, reliable method of storage, production declined from then on.

Nowadays, antique crockery is highly collectable and can sell for thousands of dollars. People use them as part of art décor, furniture, or for their original purpose of storing food in a safe, secure way.

Who made antique crocks?

Crockery was originally made in Europe, first in France, and then in Germany and England. But in the early 1700s, after the American Revolution and to cut import costs, America began developing its industry.

New York, New Jersey and Pennsylvania were early pioneers of crockery production, with New England and Ohio following soon after.

Up until the 1870s, potters would have moulded, designed and glazed crockery. But then, a sudden interest in design aesthetics meant that women were employed to hand-paint decorations onto crockery before they were glazed. These women already had artistic skills honed from croquet and knitting.

As well as a focus on decorations, potters experimented with different ways to glaze the crockery and seal it. The most common technique was salt-glazing, which gave the crockery its signature ‘glass-like’ shimmer.

Because of their many uses around the kitchen, crockery came in many different practical shapes and sizes. These included small containers such as jugs, mugs and beer bottles, to bigger storage units like churns, bowls and pitchers.

How do I identify Antique Crocks?

There are several useful ways to identify your antique crocks from one another. These include:

One of the first things you should look for on your crockery is a maker’s mark or branding. Most crockery has some sort of symbol or trademark located on its bottom that can tell you who made it, where and when.

If the potter was a master artist, and the piece was a one-off creation, they might have signed their name at the base. These pieces are incredibly rare given how unique they are.

Some of the most popular brands to keep in mind include:

Many of their products have the company’s branding embossed on the base. Pieces can date around the late 1870s. In the early 1900s, they switched logos to their now signature red wing logo.

Their logo changed considerably throughout the early 1900s, from two men sitting inside a crock to their signature maple leaf. Some crock had special numbers beside the logo to signify where it was made.

Often abbreviated in logos as RRP, Robinson-Ransbottom Pottery is easy to identify with a striking cobalt blue logo and unique font.

Their products ranged from crockery and tableware to artwork and became very popular across America in the early 1900s.

You can tell a lot about a crock simply by looking over its design. One of the key factors in defining genuine antiques is how the decorations have been applied.

If the design is painted under the layer of glazing, this is a good sign your crock is antique and genuine. However, if the paint sits on top of the glazing, this usually means your crockery is a modern reproduction.

One of the most important steps in crock production is glazing. It not only adds strength to the container but also gives it its signature look.

Whilst we’ve already mentioned the three most popular glazes, you can also use them to identify where your crockery may have been produced. That’s because some of them used locally sourced raw materials.

For example, the Albany slip used rare glacial deposits found in New York to produce dark brown finishes. Bristol glaze was developed in England, worked quicker and at lower temperatures than other glazes, and produced an off-white color. Salt-glazing is the most common glaze found in America and could create a variety of colors.

Crockery changed in appearance and color throughout the late 1800s into the 1900s. The common crock colors included cobalt blue, red, yellow and ivory.

How do I know if my Antique Crocks are valuable?

The design or decoration of an antique crock can be one of the deciding factors on how much it is worth. The bigger and more intricate the design, the more valuable the piece!

For example, crocks with animals in specific poses, detailed floral patterns, or which use a variety of different colors as seen in the video above, can easily fetch between $800-$1000 at auction.

Crockery is famous for being durable and long-lasting and is often found and sold in perfect condition. For that reason, crocks with little signs of cracks or damage will be more desirable.

That’s not to say damaged crockery is worthless – far from it. An example is a piece of crock shown below, which can still earn up to $1,500 at auction despite having obvious damage on the top of the lid.

Crockery comes in a variety of sizes. From small jugs and containers fit for a kitchen table to large vessels capable of carrying 60 gallons and more.

Larger crocks are usually more valuable to collectors because they have bigger, more intricate designs on their sides. Their glass-shimmer glazing is also more noticeable.

Sets and collections fetch more money than individual pieces. For this reason, it’s advised you build up your crockery and sell them all as one big lot.

You will eventually find complementary pieces that will add huge value to your crockery collection as a whole. Be patient – although some pieces might sell perfectly well on their own, they will yield more profits if sold in tandem with other pieces.

If you’re serious about building a collection of crockery or have many pieces you want to identify, consider investing in some high-quality reference material.

Two books, in particular, come highly recommended and offer a complete catalogue of the industry’s most valuable collections. These include:

How do you date antique crocks?

Old crockery can be particularly hard to date. Early on in the industry, companies weren’t established and did not use branding effectively.

Also, during the 1700s, when many English potters emigrated to America, American crockery quickly began to imitate English designs.

It wasn’t until the 1800s that American potters developed their style, with noticeable attention to detail on decorations and glazing.

By the 1900s, as American production ramped up, companies began using their trademarks and logos to brand crockery and set themselves apart from the competition.

Pottery is an evolving art form. But given America’s late entry into the industry, certain design features and production techniques didn’t come into mainstream attention until much later in the crockery timeline.

Some examples of this include:

Authentic? Or a Copy?

Owing to how popular crockery now is, many sellers nowadays are in the market for producing replicas or fake crocks.

Always remain vigilant when inspecting crockery, and whenever possible, inspect the crock in person to spot tell-tale signs it’s a fake.

Pay close attention to the following:

Brands can instantly help date your crockery. The Marks Project is a database of stamps, logos and signatures used by well-known potters and ceramic artists that can help you identify crockery.

They also have an extensive list of artists which is useful in verifying artist signatures on unique pieces. Each artist’s profile tells you what years they were active, and also has pictures to showcase examples of their style and bodies of work.

Where to Buy and Sell Antique Crocks？

Antique shops are useful places to find crockery to buy and sell because most of the pieces will already have been valued by a dealer. This saves you both time and effort – but don’t expect to find something cheap.

Second-hand stores are the perfect place to find hidden gems within the rubble. People declutter their kitchens often, and crockery is one of the first things to go.

What people might assume as “junk” could be valuable pottery that can be sold for a small fortune in the right circumstances. You’ll need a good eye to evaluate crockery on the spot, and there’s no guarantee crockery is authentic.

But at such a cheap price, you don’t stand to lose too much taking the risk.

Communities from around the world trade crockery on auction sites, every day. Joining and posting a listing is straightforward and usually doesn’t incur a huge fee.

eBay and Etsy are two of the most popular auction sites, with active crockery communities that post new listings every day.