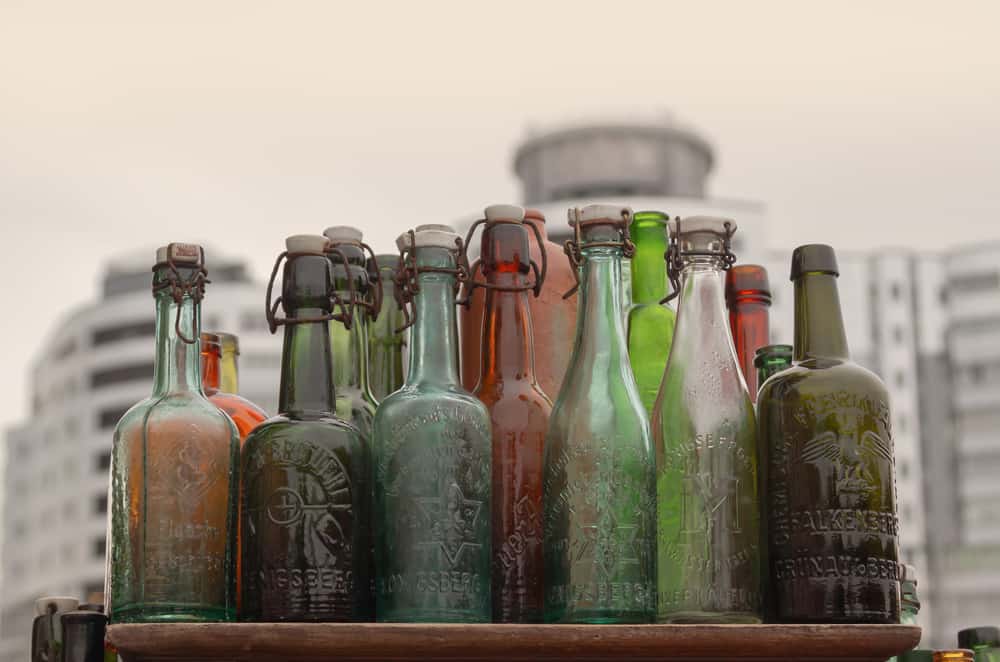 Dating antique glass bottles can be complicated if you don’t know what you’re looking for. Fortunately, the history of glass bottle production is pretty well mapped-out. So, it’s usually enough to just mark some of the distinguishing features of your glass flask, medicine or alcohol bottle, fruit jar, or other glass bottles.

Then, all we need to do is look up which bottles historically had those same features and we’ll know who made our bottle, when, and how much it’s worth today. So, let’s break down this process a bit more by going over the following 6 steps for antique bottle identification and everything else you need to know about it.

A brief history of antique bottles

The history of glass blowing can be traced back to the 1st century BCE in modern-day Syria. There, ancient craftsmen from the areas of Sidon, Hama, Aleppo, and Palmyra figured out how to heat up sand and blow it into various types of bowls and bottles that could be used both as everyday cooking and storage tools and as luxury items.

Pretty soon, these Syrian craftsmen started exporting their blown glass creations throughout the Roman Empire and the practice of glass blowing also spread soon after.

The new era of glass blowing and bottle production

As old as the practice of blowing glass is, it’s pretty unlikely that you’ll suddenly find a 1st century BCE glass vase in your basement today. Not only are such ancient glass items incredibly fragile and not easily preserved but the few that have remained to this day have been found in excavation sites of ancient settlements, not in people’s basements.

What also distinguishes this new era of glass blowing is how much better and more intricate the process became. Throughout the 18th and 19th centuries, glass blowing was still done manually by professional glassblowers. They did use much more intricate private mold shapes, however, and the blown glass of these times was more than impressive.

Materials and resources had also become much more diverse and an 1800s or 1850s century blown glass manufacturer would often use stuff such as amber, black glass, aqua glass, as well as amethyst and cobalt glass color, and more.

Things changed once again in the late 19th and early 20th century, however, as the semi-automated bottle machine was invented in 1892. Colloquially called an ABM (automated bottle machine), this new invention was able to mold the bottle’s lip together with the rest of its body and removed the need for hand-finishing every bottle after blowing it.

This obviously led to a much easier mass-production of glass containers through the early 1900s, 1930s, 1960s, and the rest of the 20th century, with lower prices, and higher accessibility, but also allowed for even more innovation in terms of designs and additional features.

What affects the value of an antique bottle?

So, how does knowing the history of glass blowing helps us with antique bottle identification? Simple – by allowing us to compare the features of the bottles and glassware we’ve found in the attic or basement to the features of antique bottles made throughout history. That way, we can compare one with the other until we’ve found out exactly how old, rare, sought after, and, therefore, how valuable our bottles are.

Here are the features of antique bottles you should look at:

All nine of these factors affect the bottle’s worth and each of them is fairly easy to figure out by just examining the bottle closely and then researching online how it compares with the antique bottles of the past. There is a wealth of information online and lots of great information website sources such as BLM / SHA – the Society for Historical Archaeology and its section on bottles called “the Historic Glass Bottle Identification & Information Website”.

To give you some frame of reference, here are some of the most valuable antique bottles sold to or by hobby enthusiasts, collectors, and other people:

Typically going for as much as $2,700 and more, two of the National Bridge White Beer Brewery Bottles were famously sold by Morphy Auction and were dubbed “extremely rare bottles”. To this day, these two beer bottles are famous as likely the most expensive bottle

The second most widely famous high-value bottle is notably multiple times less expensive than the first entry – it’s the Dr. J. Cornwall Brewing C. National Beer Bottle. Though, it’s worth noting that this is just a single bottle compared to the two above. Still, at $420, this remains a very valuable antique due to its rarity and brewery.

The two Conrad Budweiser Beer Bottles were sold for $300 together largely because they are quite old, they were both embossed and were preserved in a great condition.

This trio of bottles sold for $300 as a set (so $100 for each), but they are quite famous because of their brand and historic significance. The pre-Prohibition era bottles have relatively preserved labels marking them as Buck, Extra Pale, and Tally beer. The Extra Pale bottle is embossed too.

The set of four Weiss Beer Blob Top Bottles famously sold for $180. They were old made with different-colored glass and were preserved in very good condition, down to the functional blob tops. One of the two brown bottles even had the original Weiss closure.

How do identify old bottles?

Given the factors that affect an antique bottle’s value, let’s go through the step-by-step process of antique bottle identification:

1. Determine what type of bottle you’ve got

There are three broad categories of antique bottles you’d want to look into:

2. Detail the shape of the bottle

The next step is to examine the bottle’s shape and see how it compares with other historic glass bottles. For example, is it an open pontil bottle, meaning – does it have a pontil scar or mark inside the bottom seam? This would indicate that the bottle was made before 1855 as glassblowers then were still using iron punty rods to hold the bottles.

Another thing to look for is the signature and fully symmetrical Owens ring base that can be seen in bottles produced by the Owens Glass Company. These were among the first machine-produced bottles. These became quite common in 1904.

Other telling shapes to look for include:

3. Look for other telling marks

The shape of a bottle is a useful identifier but what can be even more useful are the specific marks found in the glass. These include:

This alone can help you very easily date your bottle as different ages and decades had very different bottle lips prior to the 1910s and machine bottle making took over:

Then, between the 1840s and the 1860s was the time of the in-rolled lip. The 1860s to 1910s saw the use of the early screw cap with ground lip and the tooled and applied ring. You can easily see how these 10 different lips compare here.

5. What is the bottle’s closure?

The next thing to watch for is how the bottle is closed. There are three traditional tops for antique bottles – the screw top, the crown top, and the cork top. Corks were popular in the 18th century, screw tops came onto the scene in the early 19th century, and crown tops – in the late 19th and early 20th centuries.

So, you can see how that too can help you date your bottle, albeit not all that precisely.

The last and crucial step is to make sure that what you’re holding isn’t a fake. Ever since the 1930s, many manufacturers have been busy making reproductions of antique glass bottles to sell them at higher prices for the “vintage feel” many people like. This makes the job of hobbyists and collectors much more difficult, however.

Such copycats will have intentional defects or exaggerated dates and fake maker’s marks that are meant to seem genuine. For a newcomer to the scene, it can be next to impossible to tell them apart from the real deal but the way to do this is to simply go through all the previous steps and/or to consult with other collectors and experts.

Some telltale signs of fraud would be if a bottle is dated as pre-1850 but its supposed date is displayed in overly noticeable and obvious bold glass colors. Or if there is an inordinate number of obvious glass impurities that are meant to make the bottle look old but are actually something a professional glassblower wouldn’t have allowed in his craft.

Where and how to sell antique bottles?

There are many places you can find bottle collectors to sell your antique glass to, each method coming with its benefits and drawbacks. Here’s a quick rundown of what you can consider:

1. Go to an antique shop

If your old collectible bottles are indeed valuable and have resale value, the store will happily take them off your hands and give you a decent price for them. The main benefit here is the ease of the whole process – you can literally just search online for the closest antique shop to your home and drive the bottles there.

There are a couple of drawbacks too, however, such as the fact that the antique shop may decide that they can’t resell your bottles (even if they are valuable) and that they won’t give you the best possible price (cause they too want to make a profit). Still, the ease of this method is understandably tempting for a lot of people.

2. Rent some space at a local flea market and sell the bottles yourself

This method has the immediate benefit that you’ll get a much better price for every price you manage to sell cause you’ll be selling it directly to the client/collector. The issues here are also obvious, however – renting space and selling at a flea market takes both time and money. What’s more, flea markets don’t reach the widest possible range of consumers so you may still not get the best possible price.

Auction houses for antique milk glass, whiskey, and other liquor bottles work the same way they do for other antiques. You just get in contact with the auction house, tell them what you have, they appraise it and tell you how much they expect to be able to sell it for and what their commission is going to be, and then – should you agree – they proceed with putting your glassware up on the next auction.

The benefits here are immense – you essentially leave most of the work in the hands of experts and professionals and you’re also near-guaranteed to get the best possible prices possible for your antique bottles.

The drawbacks are noteworthy here too, however – 1) the auction house may decide that they don’t want to bother if the value of the antiques isn’t great enough, 2) they will take a hefty commission off the final price, and 3) the whole process will take quite a bit of time whether it’s successful or not.

4. Sell the bottles yourself but online

Lastly, the usually best option for many people is on websites such as eBay, Etsy, and Craigslist. There you can easily find and sell old glassware sold for anywhere between $20 and several hundred dollars. So, if your bottles are truly antique and collectible or even just mildly interesting and/or useful, you should be able to find the right buyer.

This is the best way to go about it for most people unless you’ve found something truly historic and special that you would want to put up for an auction.

Antique bottles are quite a vast subject as you can see and we could really only scratch the surface of it here. Many people are so interested in old glassware, however, that many bottle collectors turn into literal bottle diggers and go around old estates digging for old glass bottles that might have some value.

Whether you’re a bottle digger or you just found your grandpa’s old bottles in the basement, however, it’s important to go through the antique bottle identification process carefully to determine the precise value of your old bottles.