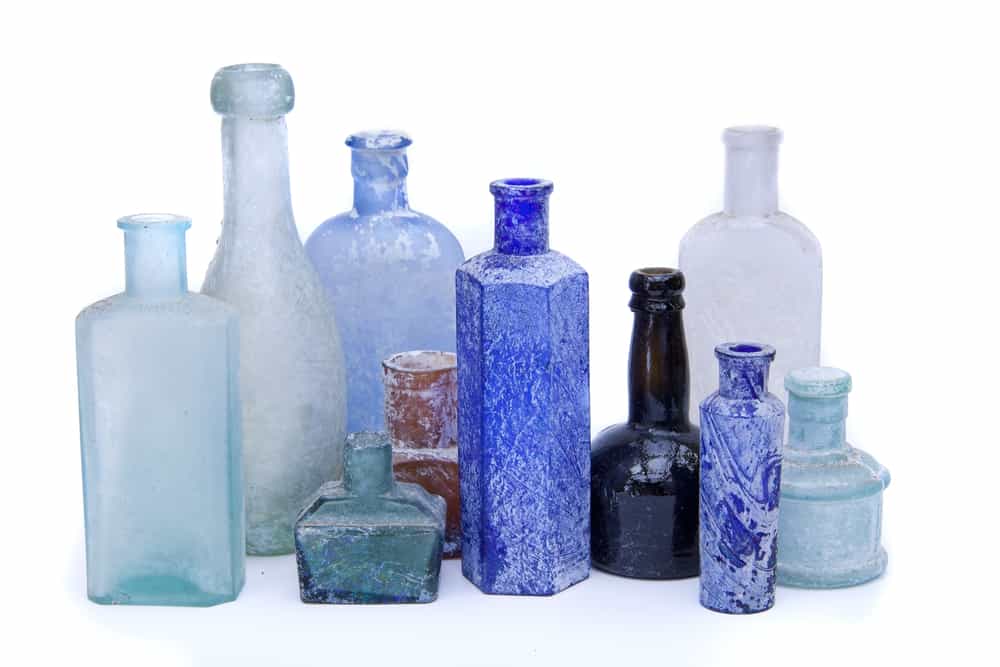 Collecting glass bottles is one of the most popular hobbies around the world – and for good reason.

Every bottle collected brings with it a treasure trove of history. From different labels and branding to government warnings, to the different techniques American glassmakers used, and much more.

Not only that, but many still contain historic goods like whiskeys, medicines and more – adding to their value.

And with so many antique bottles out there, collectors are actively hunting for rare finds across the Internet.

Today we’re going to explore how you go about identifying your bottles. Step by step, we’ll guide you through all the features and markings that make a simple glass bottle truly sparkle.

Glass identification: How do you read glass bottle markings?

You can tell a lot about the history of a glass bottle by looking at its bottom.

Simply pick up your glass bottle and carefully examine it. There are five key areas of a bottle you should concentrate on. Run your fingers along the side and base to feel for any slight ridges, grooves, embossing or abrasions.

Try to identify what the markings look like – if they’re too faint you can try an age-old method of making a print. Place a white sheet of paper over the bottle, and lightly rub a crayon across. The design or lettering should become clearer on the page.

If you still can’t make out any designs or marks, don’t try to clean your bottle either – bottles are worth more if the original residues are still inside.

Instead, let’s take a quick look at what markings (and no markings!) might mean to the value of your bottom.

How do I identify old bottle markings?

Despite there being so much variety in glassware, including colors, shapes, sizes, styles and more – there are some common ways we can identify and define glass bottles.

Every bottle, from whiskey flasks to fruit jars, soda bottles and medicine has some form of maker’s mark. These are brands, logos, trademarks, symbols, as well as letters, numbers, and date codes usually found on the sides and bottom of bottles.

Maker marks are one of the most useful ways of dating bottles because logos and trademarks are often easy to trace, even if they change over time.

For example, Ball jar logos used stacked letters for their branding between 1885-1886. After 1886, they changed to blocked, capitalised lettering. Companies regularly changed their branding, making it easy to date specific bottles.

Some types of bottles have unique markers that set them apart. For example, beer bottles have D-numbers on the base, which identifies specific distillers.

Liquor bottles may also have specific laws or legalisation embossed on them, another way of dating bottles. An example is a tagline ‘Federal Law Forbids Sale or Reuse of this Bottle’, which was put on bottles between 1935-1963 when prohibition was repealed.

The problem with some maker marks is that they are unrecognisable. But don’t worry – there is an abundance of online resources which are tailor-made to help you identify brands. These include:

Pontil marks often indicate a bottle is older, because it predates machine-led production. It’s one of the oldest techniques in glassmaking.

But what if there’s no pontil mark?

That doesn’t necessarily mean it’s machine-made. There was another production technique commonly used, known as the snap-case method. This dates between the 1850s and 1860s.

Using special apparatus, the glassmaker held the bottle securely during production, allowing for more sophisticated finishes to be applied.

Indentations at the bottom of your bottle indicate a technique known as knurling or stippling. It was commonly used for wine bottles and soda bottles like Coca-Cola, and it helped reinforce the glass and prevent any cracking from taking place.

Stippling is also a useful dating method. The technique was invented in 1940 by the Owens Company.

If you can’t spot any markers on the base of your bottle – don’t worry. This in itself is a helpful piece of information.

During the 1920s and 1930s, producing bottles by hand was in a steep decline, as machines took over and began mass-producing glass. Markers and seams moved up towards the tip of the bottle or disappeared altogether.

Some machine production left ‘suction marks’ on the bottom of bottles, which were ridges and groves that travelled around the entire base.

By the early 20th century, more and more bottle makers were using molds. Molds often left narrow lines or small circles on the bottom of bottles.

Quite often bottles had mold numbers printed on them, too. This was a quality control measure, where glass makers could spot if a mold was losing shape and needed replacing.

Whilst there are many different molds used throughout the glassmaking industry, here are the most common ones you can keep an eye out for:

If the bottle has one clearly defined mold line down the middle, it was most likely produced using the Keyed & hinge mold method.

This is one of the oldest techniques in the industry and dates back to the 1st century. Bottles made this way had very defined arching, and were structurally very strong and durable. It was popular for making bottles containing medicine, bitters and alcohol like whiskey and beer.

Popular during the late 19th century, post-bottom molds had a plate mechanism that marked bottle bases in a signature way, as shown in this diagram. This particular mold technique led to some truly revolutionary techniques in terms of design and decoration.

These left no noticeable seams on the body or base of a bottle. Often used for whiskey flasks and wine bottles were incredibly popular in production for the first half of the 19th century.

Cup-bottom molds are easy to identify, thanks to their shallow depression, thick base, and thick, striking seams along the bottle’s sides.

These bottles are easy to date, too, as the technique was popular between the 1850s and 1910s.

Is your glass bottle valuable? Or a reproduction?

As time moves on, glass bottles get more and more valuable. Many companies are tapping into the growing interest in vintage bottles. More of them are now reproducing classic looks as part of their marketing.

And as glass bottles are reusable, there are more of them in circulation than ever before. Take Coco-Cola for example, which still relies heavily on its vintage aesthetic when selling soda bottles.

As the Auction Professor explains below, some of these antique bottles can easily fetch up to $5,000 at auction and are constantly increasing in value. But! You must be careful not to confuse them with convincing modern replicas!

As bottle collectors, how can we tell if our prized antique bottles are authentically old? Or, modern reproductions of classic looks?

Here is a quick guide on how to spot authentic markings on your bottle:

Older glassmaking techniques created seams. If your glass bottle has distinctive seams at the bottom, this is a good indication of its authenticity.

However, if the seams are closer to the lip of the bottle, or non-existent, this points to machine-made bottles which could mean a modern reproduction.

One thing you will notice about early glassmakers is that they were perfectionists, and would create consistently high-quality glass with no imperfections.

Reproductions, on the other hand, often try to ‘recreate’ traditional methods and often have sloppy bumps and bubbles in the glassware.

Glass companies often changed their branding. Sometimes it was a new logo or a slight change in font to their lettering.

If you have a glass bottle with a clear manufacturer, check historical records to see if the branding, style and lettering all match up.

Be wary of any glassware that has uncommon colors and tones like red, green and yellow.

4 thoughts on “How to Identify & Date Glass Bottle Markings Bottom?”