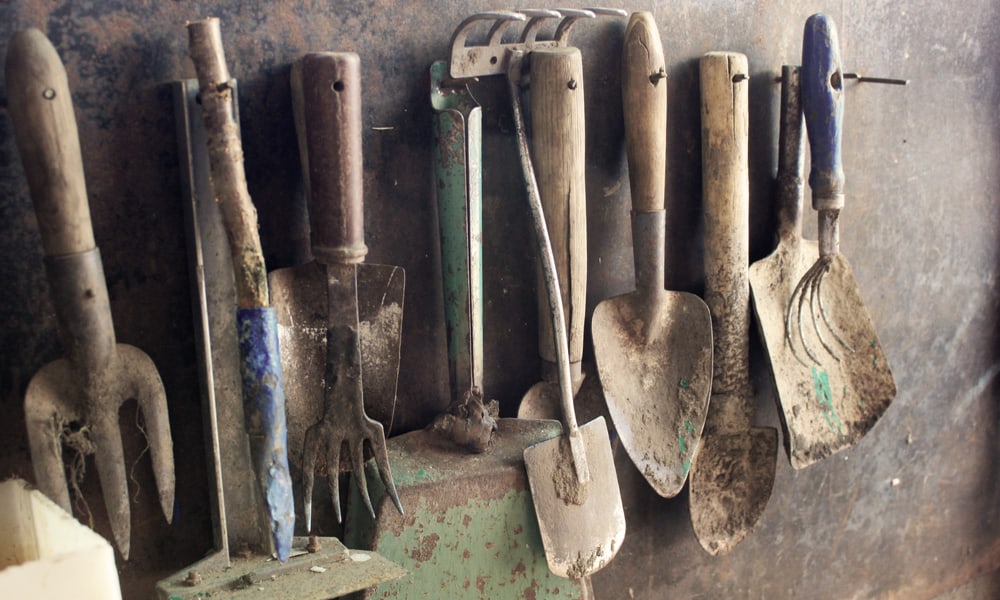 Modern farms today have a wide selection of tractors and various attachments that greatly facilitate work on the farm. Agriculture development and its modernization experienced a significant rise after the industrial revolution of the mid-1700s. Before that, farmers relied on old-fashioned agricultural equipment to complete the work.

It is difficult to determine which farming tool was the oldest. Some say it was a plow, while for others, it was a pointed stick for making holes in the ground for seeds. In any case, antique farm tools represented a bygone era when things were different. 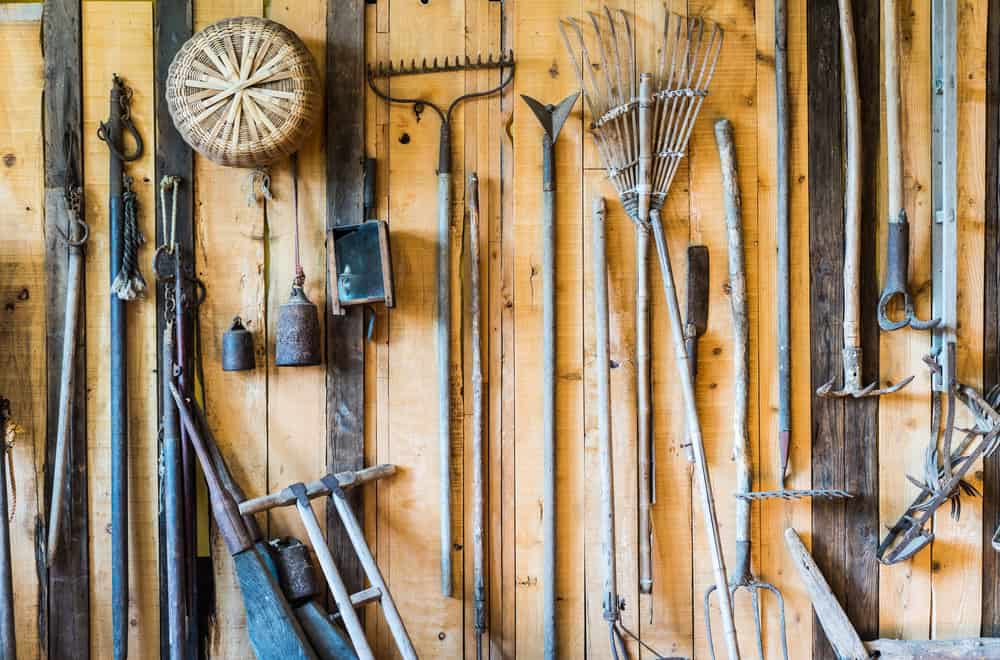 Like all other tools, the farming tools have experienced constant innovation, from creating the first specimens to the present day. The first moment when a man used a tool instead of his hands was considered the origin of the first farming tool.

The first plows originated in China in 5000 BC. They were forked sticks that made trenches by scraping the ground and provided a place for planting seeds. Later, hand-drawn plows appeared, followed by models dragged by animals after domestication.

The first stone sickle, a tool used for harvesting cereals, was dated from the same period. The first specimens were simple flint or stone blades attached to a shaft made of long animal bones or wood.

Much later, sometime around 475 BC, the first iron plow appeared in China. Although this involved only a little metal blade on a wooden handle, progress in the development of farming tools was significant. 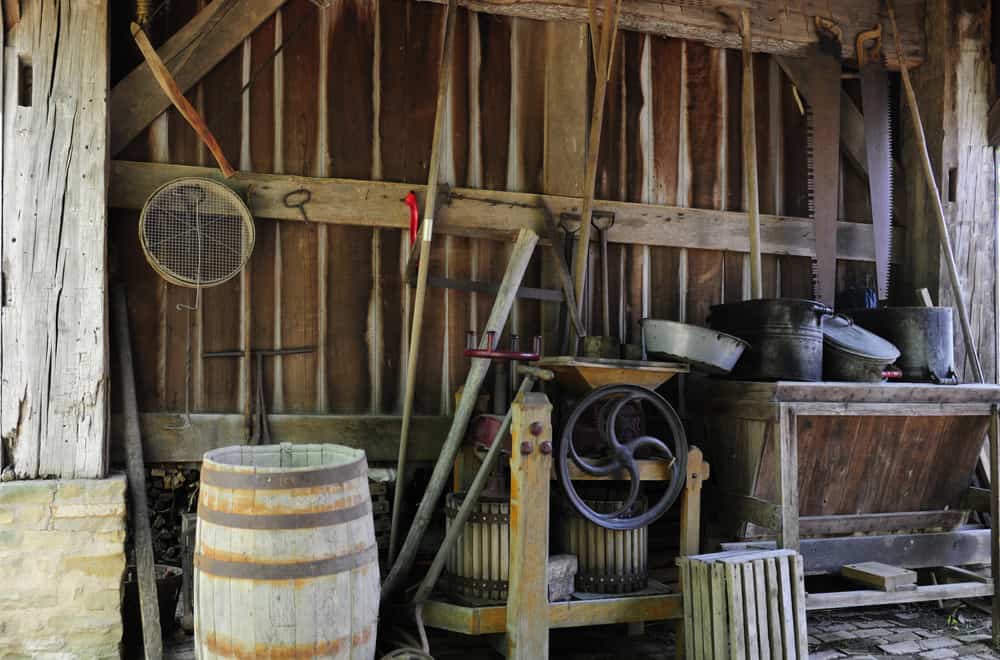 In any case, the number of different farm tools from the previous period was comprehensive. As a result, you could have difficulty recognizing some antique pieces, determining what they were for, and how they worked.

There was a group of tools that you could quickly recognize even though their appearance was a bit different than a few decades or centuries ago. In this group were: 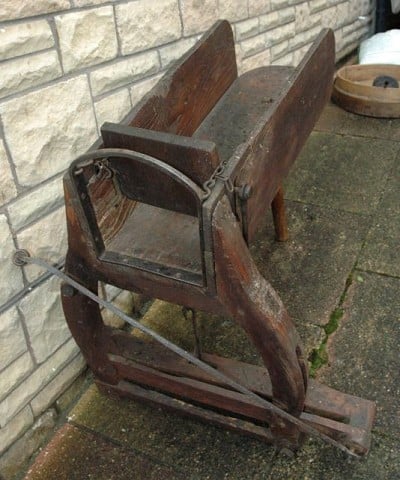 A chaff box (cutter) was a device for cutting hay, chaff, oats, and straw into short pieces before mixing them with other fodder and offering them to cattle. That was an economical feeding method and facilitated the animals’ digestion.

The chaff box parts were usually made of ash wood with few iron parts, making this tool inexpensive. Farmers had at least one in their stables until the end of the 18th century.

You could recognize two variants of this tool, the larger ones located in the barn and the portable smaller models. The larger box cutter consisted of an open wooden trough with a metal cutter at the front end.

In most cases, this type stood on four legs, the last of which was slightly longer. That allowed more effortless cutting as the trough was tilted forward.

The portable chaff box was half the size of the barn one. It typically had light construction, but it often lacked safety features. Therefore, farmers concluded that it was more cost-effective to procure a larger model for the stable and train their workers to work with this helpful tool. 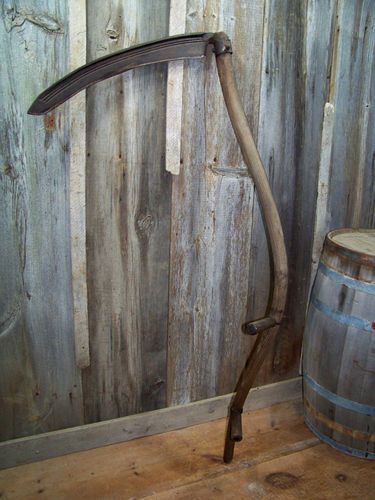 The scythe was one of the primary agricultural hand tools intended for harvesting crops and mowing the grass. Numerous pieces of evidence suggest that scythes in some form appeared as far back as 5000 BC. It seems that people also used them in ancient Rome and ancient Greece.

This tool usually consisted of a curved blade mounted on a long, wooden curved handle. You could see a wedge on the wooden handle, making mowing effortless. It was enough for the mower to grab that wedge with one hand to hold the tool stably in his hand.

In the 16th century, the scythe became a helpful tool in agriculture. Although mechanization has replaced it nowadays, you can still see that people use this tool in some regions. 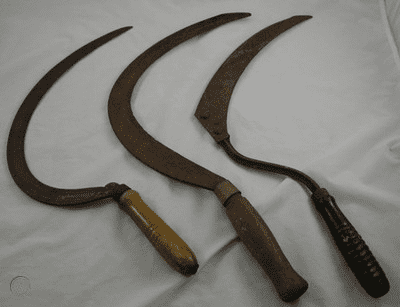 The sickle was considered the oldest tool for harvesting and consisted of a curved metal blade attached to a short wooden handle. This tool’s disadvantage was that the user needed to take a squatting or bending position during work, making the harvest slow.

The first sickle made of flint appeared in excavations at sites in Israel dating back to the Epipaleolithic era from 1800 to 8000 BC. This tool had a significant impact on agriculture development and was very efficient for harvesting cereals. Its development continued in the Bronze Age.

Interestingly, the sickle played a symbolic role in religious ceremonies in some areas. Plus, you can find it still in use today, regardless of the agriculture modernization. 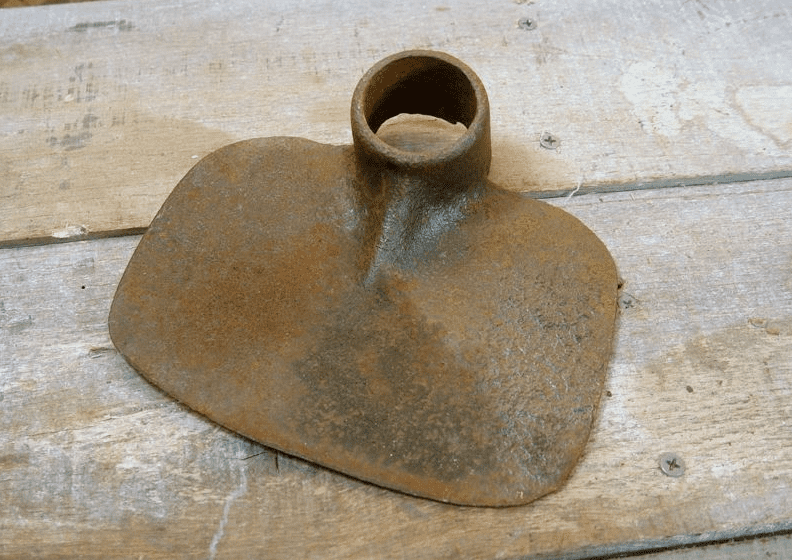 The hoe is an ancient agricultural hand tool used to clean and shape the soil, remove weeds, and harvest root crops. You could find traces of their existence in the Code of Hammurabi in the 18th century BC and the Book of Isaiah around the 8th century BC.

People used several hoe models, including those with specific or multifunctional purposes. You could typically recognize two standard hoe types:

People used this tool type to shape the ground by placing the blade at right angles to the wooden shaft and starting digging. The depth of the excavated soil depended on the angle at which the hoe entered the arable land.

Although hoes were a valued farming tool for centuries, they often negatively impacted human health. In most cases, their prolonged use caused permanent pain in the lower back due to the bent position during digging. The California law banned the hoe use in 1975, declaring it an unsafe tool.

A shovel was a farming tool for digging and moving materials such as gravel, earth, sand, coal, ore, or snow. This hand tool consisted of a wide blade attached to a medium-long wooden handle.

The original shovel from the Neolithic era was a bone, or rather the scapula of some large animal, and had no handle. It was only with later development that it received a wooden extension, enabling the farmer not to squat or kneel during work.

Unlike sharp modern hoes created of hard plastic or sheet steel, antique models were made of iron. The handle was typically wooden and made of maple or ash with the shovel attached to one side. The other end contained a T-piece, making the use more effortless. 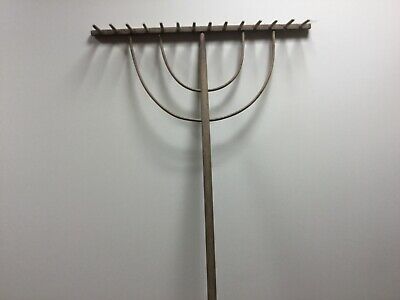 The rakes were hand tools used for leveling, cleaning, and breaking jobs in gardens and other landscaped areas. It is still a standard farm tool, although hand rakes are now usually replaced by a mechanical version, particularly on large farms.

There was a belief that the first rakes included human hands and tree branches. Unlike most tools that evolved following agricultural development, the basic rake design has remained more or less unchanged since ancient times.

Nowadays, as in the old days, rakes have a long handle with an attached head with tines. Garden rakes and rakes for leaves have always been usual household tools of high value.

The industrial revolution brought significant change in farm tool production. Before that, all pieces were handmade, mainly to order, but the tool production became mass after that period.

After the industrial revolution, farming tools became cheaper and more accessible to farmers. The basic design of many tools, such as rakes, stayed unchanged over time, but the antique pieces’ prices could be surprisingly high nowadays. 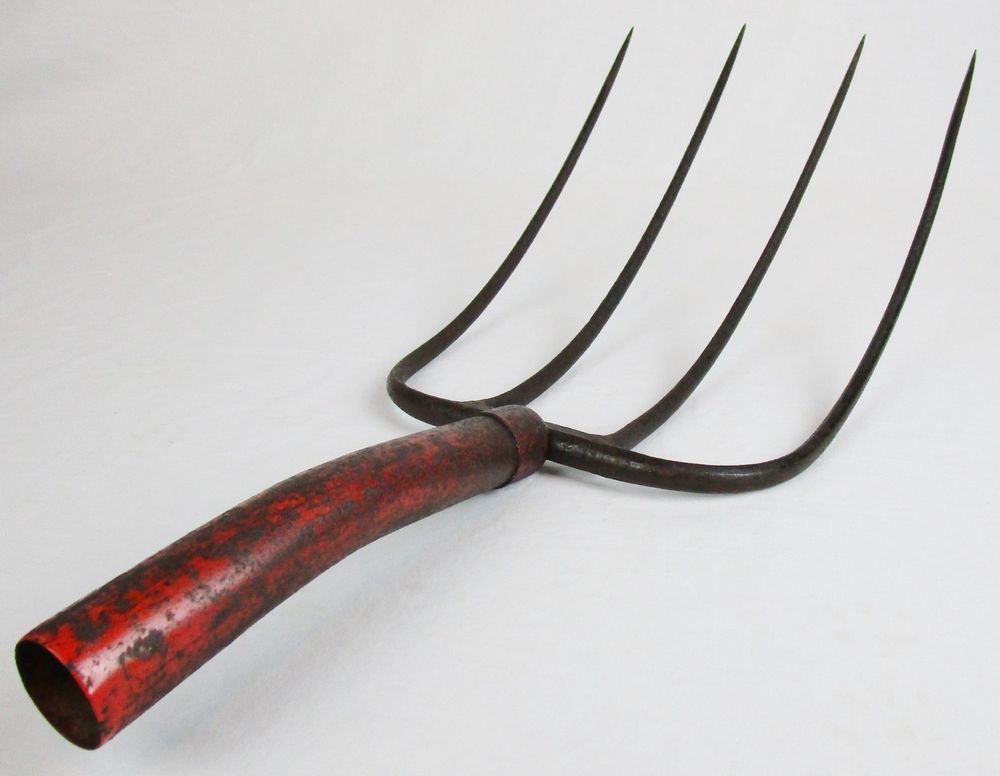 Pitchforks were initially made entirely of wood, and their first mention dates back to the 1300s. Most historians connected this farm tool’s origins with medieval Europe.

People mostly used pitchforks for handling hay, straw, and manure. Each piece had a fork tines series on a long handle, and their number varied from two to six, depending on the work type this tool was intended for.

Tines were straight or slightly curved and usually thick enough to withstand heavy use. The pitchfork design allowed the head with tine could be detached and replaced with a new one or placed on a different handle when needed.

The most common pitchfork use was collecting and throwing hay, and you could still find this tool on most modern farms. However, the pitchfork had one more role in the Middle Ages. Since the farmers were not allowed to bear arms or could not afford them, they used what was at hand.

Pitchfork seemed to be a very effective weapon as it could be used for defending lands and as self-protection. Farmers also carried this tool while rioting to bring attention to their living and working conditions. 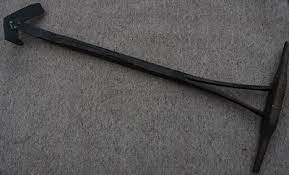 One of the most primitive hand tools, the breast plow, was used for cleaning lawns and various surface vegetation. The T-shaped handle was attached to a wooden shaft, carved into a flat angled blade with the side turned like a large blade. The farmer pushed it by hand and used it mainly for the paring and burning process.

This method allowed more effortless ground cultivation when it was impossible to use horse-drawn plows due to the terrain’s inaccessibility. In that case, the plowing depth directly depended on soil moisture and condition.

This tool’s exact age and origin are not known today. Based on modern research, we could assume that its use began from the 1650s to the 1850s. After that, the need for this tool decreased. Nevertheless, it was occasionally in use in some areas until the 1940s.

The breast plow was primarily a tool for small farmers. Its most common purpose was to level anthills and molehills, clear weeds, and potato plow. It was possible to find this antique tool in different sizes and shapes, depending on local conditions and the region where it was used.

When you want to enrich your collection of antique tools, the easiest way is to look for them on nearby farms. If this source is not available to you, you can look for them on online platforms such as:

eBay – This original e-commerce platform offers countless antique farming tools for sale. Be prepared that the prices are not standardized but depend solely on the seller.

Etsy – This platform is similar to eBay, but some users claim it is easier to use. You can find numerous antique tools available here at affordable prices.

Be aware that these tools’ value on the market varies with their age, condition, and size. In most cases, their availability on the antique market also significantly affects the price.

It is always advisable to be careful when using online shopping. Although the ads usually contain pictures of items for sale, you can find dishonest sellers offering fake antiques.

Remember that you have the right to request additional information when you are interested in buying. There is one more thing. You should always count on shipping costs besides the item’s price.

You can decide to collect antique farm tools since it can be a fun hobby and an educational activity for the whole family. Trying to guess about tool types, your kids will learn about their purpose in the past and the role they had in rural American history.