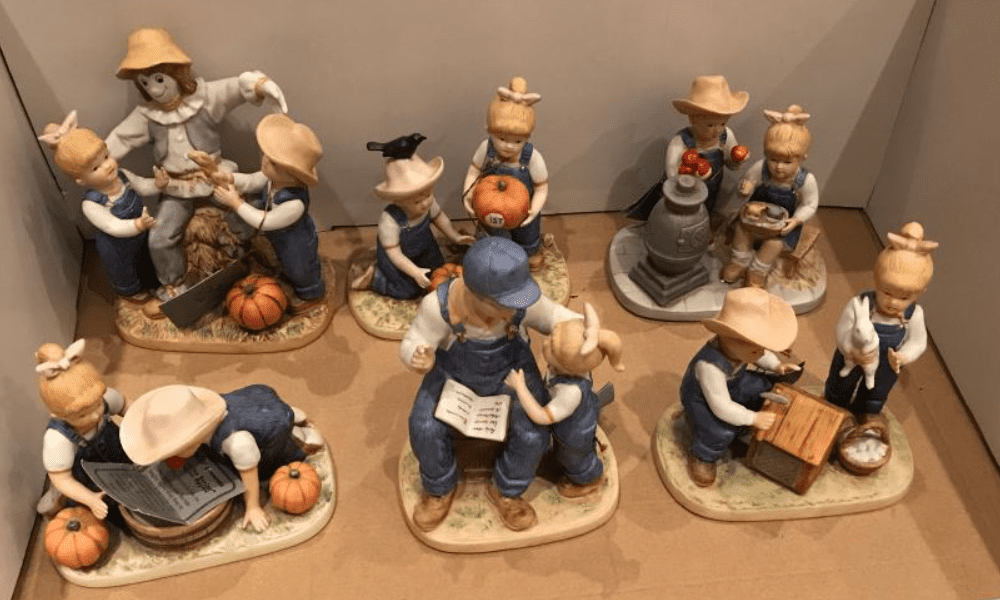 If you’re in the reselling space, you probably know a lot about miniature statues in porcelain or clay. Denim Days figurines fall solidly in this category. They feature adorable blond farm kids in denim overalls. Just so you know, overalls are sometimes called dungarees in the UK.

These little statuettes were made by Homco (Home Interiors Company). In sets, you can get maybe $100 for the most valuable Denim Days figurines, but you’ll typically earn $20 to $50. You can find new replacement lots for much less. So let’s check out a few top reseller listings.

First off, it’s really important to separate Denim Days figurines from #TriggerWarning Denim Day, which is an annual awareness event on the last Wednesday of April. Denim Day is a crucial form of activism and social support, but it’s traumatic, so click through with care.

But today we’re talking about a far more pleasant form of Americana. Japanese porcelain figurines were a big hit, and Denim Days figurines are our answer to this hobby. The matte statuettes were mostly made in Asian factories, but they were targeted at American tastes.

We’re just coming out of an era where much of the world was stuck inside their houses due to Covid. Some people remained on lockdown for up to two years! But even before that, many Americans were looking to spend more time traveling, farming, or generally being outdoors.

A lot of this is economic. Millennials (and now Zoomers) are having a harder time buying and renting, so they’re opting for van life, tiny houses, homesteading, and off-grid living. These Denim Days figurines depict some of the rustic activities that attract this generation.

The desire for pastoral lifestyles is very much a ‘grass is greener’ thing. Just ask anyone who grew up milking cows at 4 am and chopping wood by hand – it’s not as fun or romantic as it seems, and it can get smelly! So if you want to vicariously celebrate farm life, get these sets.

Enjoy the warm fuzzy sentiment of collecting eggs in a cowboy hat … without the risk of getting your fingers pecked off, or trying to get the smell of chicken poop out of your shoes. Also, you’re dodging the drama of actually persuading your children to do farmyard chores!

The most valuable Denim Days figurines are Christmas-themed. This might be because they can be used as holiday décor and then locked away for the rest of the year. Meaning they’re less likely to get damaged and can retain any intrinsic collectors’ value for generations to come.

But the trick to making figurines collectible is to make them in small batches. At the moment, Denim Days figurines are easily available so they’re not worth much. But in a few decades when the bulk of them are lost or broken, you could have some treasure there…

It’s hard to make an argument against bacon. (Unless of course you’re vegan, kosher, or halal.) We love the taste so much that we consciously ignore the myths we associate with pigs. We think of them as greedy animals that will eat anything and that tend to smell icky.

In reality, while pigs do eat and sleep in the trash, they’re among the cleanest animals around, and the smartest too! And they can be quite cute when they’re little. Still, if you don’t want to test this theory at your neighborhood pig sty, grab the Piggy Denim Days figurine instead.

If you plan to hold on to your Denim Days figurines, you’re safer preserving the holiday-themed ones. They’ll be easier to position for resale, even if they don’t become treasured family heirlooms. This pair of Halloween figurines are a classic example of this strategy.

Right now, they’re barely worth $20, but in a few decades, you never know! The two come separately, and they feature Danny in his ghost costume and Debbie in her fairy costume. Debbie has her trademark ponytail and bangs (though you’ll sometimes see her in pigtails).

As we said at the start of this piece, Denim Days figurines typically figure a pair of blond siblings in farm settings. But if you look around, you might find some unusual sets. One that pops up is an African American boy (skateboard) and girl (book bag) eating ice cream cones.

Ask the seller if they have the original box, just to be sure it’s authentic. If possible, have a video call with the seller and ask them to turn the statue over so you can verify the Denim Days stamps. The figurines sometimes have a gold-colored Homco Taiwan sticker instead.

You don’t generally associate the midwest with chilly winters, but some states do experience blizzards. Especially in the mountainous regions. So while it feels counterintuitive, it can be calming to see Debbie and Danny playing in the snow like most kids dream of doing.

But if you’re buying statuettes that seem unusual, focus on listings that have multiple photos from various angles. You can also ask the seller to flip the figurine so you can see the bottom. If they’re unwilling to do this in real-time (and only have one photo), then buyer beware…

It’s fairly easy to identify Denim Days figurines because they have their year stamped at the base. Some post-1985 ones had the name of the diorama or scene stamped there too. Mary Barker’s Complete Collection Home Interior’s/ Homco Denim Days is a good reference tool.

Collectors’ items like Tom Clarks and Hummels are all about facial expressions. Others (e.g. from China and Japan) are driven by glossy glazing. But with Denim Days, the emphasis is on their activities, their bright yellow hair, and the vivid blue texture of their denim clothes.

Denim Days figurines haven’t been around that long, so you won’t find much about them online. We do know that 72 sets were released, and you can find photos of them in Mary’s book. It’s not an official catalog though (more like fanfic) so the pictures aren’t clear.

Because these statuettes are young (mid-80s), they haven’t yet earned their vintage cred. It could be worth holding onto them until a landmark anniversary like the 50th or 75th when they’ll probably be worth more. But only if the pieces remain rare and elusive on the market.

You don’t find many Denim Days figurines with an adult involved. But when you do, it’s a touching scene like this one. Their mom repairs a hand-sewn flag while the kids hang around her with their favorite toys. It’s a patriotic scene, and a comforting one if you look closer.

Today, you wouldn’t wonder where the dad is. You’d assume he’s the one behind the camera, taking the picture. But this is a carving, and mom is cradling the Stars and Stripes as Debbie cuddles her teddy bear. Danny is in protective fireman mode, so dad might be away at war.

Denim Days figurines are manufactured in China, Malaysia, or Taiwan, but they’re designed for American consumers so they appeal to our sense of beauty and value. As we mentioned before, some of the Taiwan pieces have a gold sticker instead of the usual black back-stamp.

But as you buy that figurine, you may want it to become a family treasure. Try giving it as a birthday gift, or on a special occasion like the first day of school. The sentimental value means they’ll take better care of it, which means it may appreciate over the next 50 years!

We’ve talked about Denim Days figurines that feature characters other than Danny and Debbie. And you may suspect these pieces are counterfeit because they seem so unfamiliar. In such cases, use other factors to verify the piece, such as the gold sticker we’ve mentioned.

This piece depicts a teenage boy on a fishing trip. It might be an older version of Danny, or he could be someone else entirely. The figurine has appeared in multiple places, and even though it has no year or stamp, it has that trusty golden sticker, so it’s probably genuine.

Most Denim Days featured Debbie and Danny playing or doing various tasks. They might be together on a shared base or they might come in matching pairs. Sometimes, the figurines included their pets. The statuette might also have accessories to their chosen chore or game.

You might see the little boy fishing or a little girl playing baseball. The art focuses on the typical countryside activities of farm kids, complete with their straw hats and suspenders. Characters are largely toddlers, but you’ll spot a few teens and adults in that storytelling mix.

As you look through the completed listings on eBay, you might notice that some appear to still be active. Maybe it says ‘Buy it now’ which seems surprising, since it’s allegedly a sold item. This could mean the sale period ended without a buyer so the seller re-opened the post.

If the seller is on vacation, they may pause the listing unsold and re-start it later. Another possibility is the seller had multiple items, so a few sold, but some identical ones are still available. Finally, the seller may be gaming the system, so look out for any sneaky signals!

How can a seller game the ‘sold tab’ system? Well, eBay doesn’t handle cash or shipping – it’s all on the seller. So if the seller claims the sale is complete, eBay accepts it as fact and adds the item to the ‘sold tab’ even though it may still be sitting in the seller’s stocking warehouse.

A seller might use this technique if they regularly check their stats. Their analytics tools will tell them that visitors are focusing on sold items, so the vendor sneaks their listing onto that landing page. It’s like trend jacking, but for eBay. So double-check any post you’re watching!

If an item says ‘listing ended’ but doesn’t show the number of bids, does that mean the seller is shifty? Not necessarily. It could mean only one person wanted the item and they bought it at the stated price. Or it could mean the seller doesn’t accept offers below their asking price.

Outside of these factors, shipping comes into account. You’ll need to carefully wrap and box these pieces to stop them from breaking in transit. So beyond the extra weight costs, consider whether you have the time and patience to pack this fragile cargo for such a low margin.

Tips for Finding the Most Valuable Denim Days Figurines

Reselling dolls and miniatures is tricky if you’re inexperienced. Here are some tips:

Do you have any further advice on the most valuable Denim Days figurines? Tell us below!