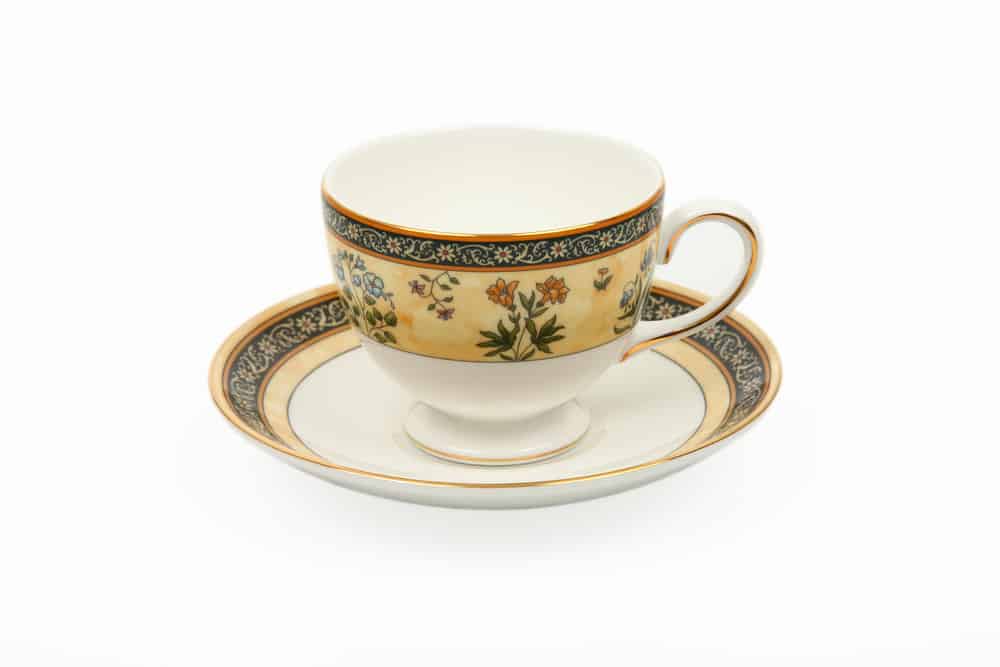 “China”, or what is often called “porcelain” originated in China about 2000 years ago, but reached Europe just in the 17th century. The pieces made by Chinese craftsmen were unmatched for a long time.

However, an English porcelain brand called Wedgwood was founded in the late 1800s century and offered affordable porcelain pieces to the masses who couldn’t afford the supreme craftsmanship of porcelain made in China.

Wedgwood pieces featured intricate designs that eventually impressed even European royalty. This company produces porcelain pieces to this day, but its vintage and antique items made in the 1800s and 1900s are being sought by collectors from all over the world.

In this article, we will cover everything you should know about Wedgwood china, from its history to its patterns and value.

The story of Wedgwood china starts in 1759 when Josiah Wedgwood founded the company with hopes to compete with pottery from China. At first, it didn’t produce real fine china, but rather other wares that looked like porcelain, albeit lacked in quality.

However, the company invented and developed many techniques and production methods that eventually led to highly sought-after china pieces which are being produced to this day.

Throughout the years, dozens of famous artists have collaborated with Wedgwood to design and decorate its china. Some of them include Eric Ravilious, William Blake, and Jasper Conran.

Wedgwood china is renowned for its intricate and aesthetic designs that are more of timeless pieces of art than mere adornments for china. Because of that, Wedgwood is in business for over 250 years, but the path to success wasn’t as easy as it might seem.

Josiah Wedgwood passed away in 1795 and left his business to sons that weren’t interested in pottery. Luckily, Wedgwood’s nephew Thomas Byerley took the lead and slowly but surely built the business, which bloomed during the Victorian era in the 19th century.

Wedgwood has manufactured dozens if not hundreds of different china patterns throughout its 263-year-long existence. As a result, we simply cannot list and describe all of them. However, we can present some of the most popular and known patterns:

This is one of the most known patterns and types of Wedgwood china. It was developed in 1768 by Josiah Wedgwood himself and featured wares that were burned to black during the firing process.

At first, it was sold without any ornaments or patterns, but the company improved on the Black Basalt line and soon after started decorating them with Greco-Roman motifs that were loved by the European aristocracy of the time.

First introduced in 1774, Jasperware patterns are synonymous with Wedgwood china. It’s characterized by a white base color that’s adorned with muted blue surrounding the Greco-Roman motifs.

Jasperware mimicked Roman cameo glass and other artifacts from ancient civilizations like Egypt and was the product line that kickstarted the success of the Wedgwood brand.

This pattern was first introduced in 1931 and is one of the most liked ones to this day. It features a beautiful turquoise and cream color palette which complements various mythical beasts and creatures spanning through the surface of the pieces.

How Do I Identify My Wedgwood Pattern?

Identifying the pattern of your Wedgwood china can be extremely easy if it was made after 1962. It’s because most such pieces have their pattern name printed on the bottom or the back.

It becomes slightly more difficult if your piece was made prior to 1962. Older pieces rarely have their pattern name printed on the surface, so you’ll have to do some research and find the pattern itself.

The best way to do it on your own is either to use a reference book like “Wedgwood Jasper Ware: A Shape Book and Collectors Guide” by Michael Herman or use an online marketplace or database containing the list of patterns, like this one or this one.

You can also go to the official Wedgwood website and find information on all the patterns that are being manufactured to this day.

However, we always recommend reaching out to a local china expert and asking for help. Collectors are always happy to share their knowledge and help beginners identify the patterns.

Is Wedgwood China Worth Anything?

Most contemporary Wedgwood china items cost under $100. However, antique or vintage Wedgwood china can be worth much more than that. Some have even sold for over $50,000!

First, we’re going to explain to you what influences the value of Wedgwood china, and then investigate the value of some specific pieces. Finally, we will share some tips on evaluating the price yourself, so you can estimate how much a certain item is worth.

So, the 5 factors influencing the value of Wedgwood china:

As with most antiques, age is one of the most important factors determining its value. Wedgwood china from the 1800s is most likely to be the most expensive, while china made closer to the 21st century is more likely to be valued less.

Even the oldest Wedgwood china pieces that are shattered aren’t worth much. This type of antique is valued for the craftsmanship it took to make it, which resulted in a visually pleasing appearance.

Because of that, the condition is very important, and mint pieces are worth the most. A single, barely visible scratch at the bottom of the piece will still make the price drop.

Another important factor is the pattern of china. Some patterns, like Jasperware, Queen’s Ware, and Majolica are extremely popular and in demand, making them more expensive.

As a rule of thumb, the rarer the piece, the more valuable it is. Rarity can be seen as a combined factor consisting of age, pattern, and type, including all the nuisances of these individual factors into a single one.

For example, just because Wedgwood china has a rare pattern doesn’t mean it’s going to sell for much, because it might be a modern piece or its type isn’t that popular among the collectors.

There are two ways to interpret the “type” of china. The first, is its shape and form, like whether it’s a cup or a statue. The second way is to categorize Wedgwood china into “studio” and “tableware” pieces.

Studio china is decoration and includes things like sculptures, vases, and other adornments. Tableware china is things that are actually used, like cups, plates, and bowls.

In general, Wedgwood china that’s considered to be studio is more expensive than tableware china.

Now we can take a look at the value of some specific Wedgwood china pieces:

Despite being made relatively recently, in 1980, the pot managed to sell for such a price because it was in near-mint condition. A matching sugar bowl was sold for £450 (≈$560).

Wedgwood china is not only sold on eBay but also on more prestigious online platforms like Christie’s. One dessert service made in the early 1800s was auctioned off for $8050.

Every item is adorned with a painting of a bird that most likely was painted by Aaron Steele. The auction estimate was $4000-$6000, but it sold for twice as much because it featured unique artwork that’s possibly one-of-a-kind and not found on other Wedgwood pieces.

These two cups were made in 1991 and featured a rare pattern of a hunting scene that depicted gentlemen on horses chasing their prey with the help of a group of dogs. While the mugs weren’t even in mint condition, they still sold for that much.

It shows that even modern Wedgwood china pieces can be worth a lot of money, and you shouldn’t disregard Wedgwood items just because they weren’t made prior to the 20th century.

How to Sell and Buy Wedgwood China?

There are many options you could consider if you’re interested in selling or buying Wedgwood china. However, some are better than the others, and that’s why we’re going to recommend to you some of the best places for selling and buying Wedgwood China online:

This company has over 3 decades of experience in china with various brands, including Wedgwood. If you’re living in the U.K, you can sell your Wedgwood pieces that date back to the 1960s.

If you’re looking to buy some, you’re lucky, because Chinasearch is the largest retailer selling discontinued china, including pieces by Wedgwood. It has one of the widest selections and you can conveniently sort by patterns to find the item you want.

Founded in 1982, Replacements, Ltd. is the largest retailer of china, crystal, and silverware in the entire world! There you can both, sell your own Wedgwood china, or buy any of over 27000 items in over 1700 that are currently available online.