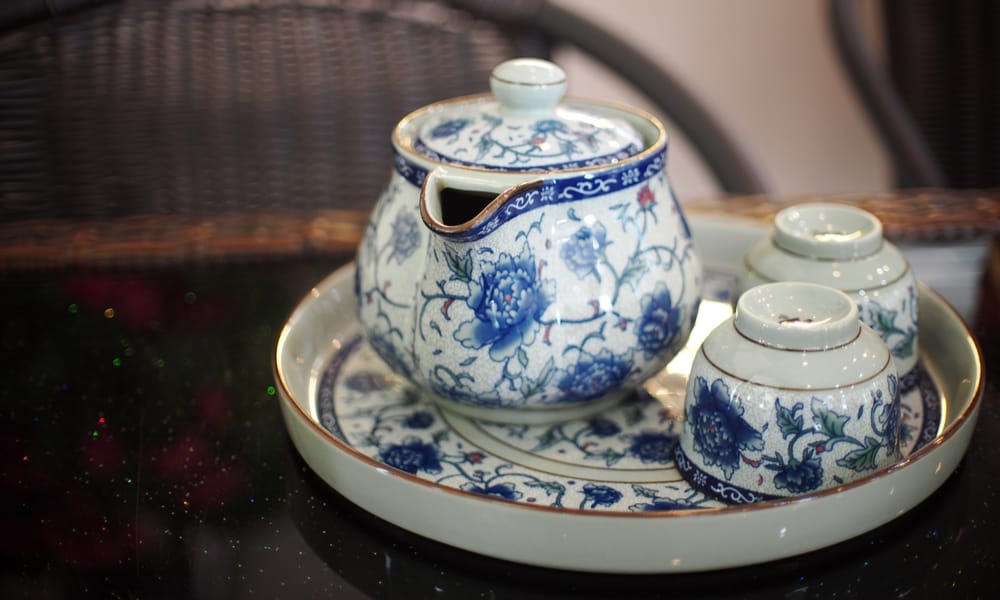 Lots of our grandparents had display cases for ‘the good china’ so we associate porcelain with fragility, luxury, and elegance. It’s one of the first items you’ll consider when you get into reselling. But it helps if you can tell what’s worth a small fortune and what’s just cheap china. Let’s look into this and learn about the most valuable vintage Noritake china patterns.

The average person is lured into reselling through two main sources – TV and YouTube. Maybe you saw something worth thousands of dollars on Antiques Road Show or Pawn Stars. Or maybe you’ve been watching stoopers, relic hunters, and thrifters on YouTube.

Once you see how much they make, you might rush to your grandparents’ barn or attic. Or you may start exploring garage sales and estate auctions. Just remember the first rule – sold items are more accurate than open listings, so if you’re checking eBay, focus on the ‘sold’ tab.

Another important pointer when searching for the most valuable vintage Noritake china is to understand the various types of ceramics. Yes, it’s all baked clay, but the style, quality, and additives differ. It’s crucial for beginners to distinguish china from much cheaper milk glass.

Milk glass was originally called opal glass and was made for buyers that couldn’t afford pricy china. The glass is lighter in weight and more translucent than porcelain. Pastel blue milk glass is sometimes called delphite, while pale green milk glass is often referred to as jadeite.

Other types of porcelain that you might mistake as Noritake china include faience, which has a tin oxide glaze to make it shiny. Meanwhile, bone china is infused with kaolin clay and cow bone ash with traces of quartz and feldspar. If the bottom side is glazed, it’s worth reselling.

Bathroom Porcelain aka vitreous china is typically used for sinks, tubs, and commodes. The name refers to the glaze, not the clay, and it’s not the same type we eat with. Oven-proof dishes can be food-grade porcelain as well. They have more heft than delicate china crockery.

Let’s dig into the history of the most valuable vintage Noritake China patterns. The company was started by the Morimura Brothers, Toyo and Ichizaemon. These New York businessmen opened a shop in 1876. They imported Asian art, ceramics, and décor for household use.

The brothers knew Europe had a stranglehold on the domestic ceramics market. But when they saw fine French porcelain at the 1889 expo, they got an idea. They started a factory in their hometown, a village called Takaba in Aichi Prefecture, and made products for the US.

The factory was based in Nagoya, the capital of Aichi. It’s an industrial hub with a wealth of skilled potters and raw materials. Because the Morimuras designed with the US market in mind, they started with western-styled dinner sets that directly appealed to American tastes.

Noritake china was mass-produced for export, but they painted the pottery by hand and used gold paint to embellish the handles and rims. Their first ever set of dinnerware set was the Sedan, exported from Nagoya in 1914. It was a luxurious gilded set with a high price point.

Over time, especially after World War II, Noritake dinner sets were crafted to be simpler and more affordable. This way, they could attract the masses. Noritake deliberately produced pocket-friendly pieces that epitomized luxury and quality. They still retain value as antiques.

While buyers in the US have always referred to these pieces as Noritake, the company only adopted this name officially in 1981 because of Japanese copyright conventions. Before then, companies weren’t allowed to use landmarks as part of their formal logo or trading name.

Today, Noritake Gardens is a famous tourist site. It’s where the first brick kilns are housed, and it also boasts a museum full of Noritake treasures, a gift shop, a restaurant, a café, and a craft center where you can buy blank porcelain and learn how to paint equally pretty pieces.

A lot of antiques are passed down from parents or grandparents, though you can buy them at estate sales. So Dr. Lori – the Ph.D. appraiser – offers some stocking advice, whether you’re packing them in the car, the cabinet, or your stock room. Place paper towels between plates.

It’s safer than plastic packaging because it releases heat and absorbs moisture, and both can damage your china. Also, never stack more than six plates. The weight of the plates above will mar the one at the bottom of the pile, and that could lower the value of the entire set!

Someone might tell you the best way to spot china is translucence. But before you learn the lingo, you may end up with milk glass instead because pricy porcelain (e.g. bone china) can sometimes be slightly see-through! This quality is technically categorized as paper porcelain.

Paper porcelain isn’t safe in the microwave, dishwasher, or fridge. Its translucence comes from the amount of kaolin clay in the piece, and you can tell by holding the piece up to a bright light source. But do it carefully – you don’t want to break a potentially valuable piece!

Ideally, the most valuable vintage china is unused. It probably lived in a cabinet or box before you found it. Maybe it was intended as an heirloom, but chances are it was kept up there to stop the kids from breaking it. Or maybe it was a status piece purely for display.

So if you do intend to eat off your fine porcelain, avoid acidic foods (lemons, ketchup, wine, vinegar, etc.) The acids could damage the surface of your china and lower its eventual resale value. If they’re display pieces, air the cabinet once a month – trapped heat ruins good china!

When you’ve been trading antiques for a while, you’ll notice how dismissively experts talk about ‘mass-produced pieces’. These items were made in factories, machined in the millions. So while their visual quality is high, they released so many that they flooded the market.

This helps lower the cost for makers and customers, but it makes the pieces so easily available that they have little collectible value. Noritake beat this by creating an assembly line of painters to work on each piece by hand. That way, individual pieces stayed unique.

As a beginner, you might also wonder why hand-painted pieces are so highly prized. You may see porcelain with childlike mistakes – maybe the color goes outside the lines, or you can see tiny paint smudges. Ironically, this proves the pieces were human-made, not machined.

Collectors will pay much more for verified hand-painted porcelain that has ‘errors’ because this serves as authentication. So don’t dismiss a piece for being less than perfect. If an appraiser confirms it, that flaw could be what pushes it from the hundreds to the thousands.

You’ve probably seen the word Nippon on certain Japanese items, including some of the most valuable Noritake China patterns. You may even have spotted Nippon TV on that Netflix show about Japanese toddlers running errands. Is it the name of a famous place?

When it’s written out in Japanese, Nippon is spelled as two characters (日本). The first one means ‘sun or day’ and the second one means ‘origin’. And remember, Japanese characters are read from left to right. Nippon means ‘land of the sun’ or ‘where the day comes from’.

Even after that transliteration, you may still wonder – why Nippon? Well, the sun rises in the East, so if you were in China, Japan (Nippon) lay in the direction of the sunrise. So in the old days, mainland people referred to the islands of Japan as Nippon. Locals accepted the name.

This is also why Japan is sometimes called the ‘Land of the Rising Sun’ and has a red dot on the flag to represent the dawn. Basically, Nippon is the vernacular Japanese and Chinese name for Japan. You can sometimes see it spelled Nihon or Nifon. The ‘n’ at the end is silent.

You may now be puzzled about how Nippon became Japan. It’s all about pronunciation. In English, words don’t always sound the way they look. Think of the words bead and dead as examples. But some languages are homophonic while others use characters to form words.

So a word like日本 is pronounced as Ni (本)Po (日) in certain Japanese and Chinese dialects. But in other Asian languages e.g. in Indonesia or Malaysia, they added 國 (country) and pronounced it Jepun, Jepang, or Jepun. To Italian Marco Polo, it sounded like C(h)ipangu.

Marco Polo was a famous explorer so his ideas sailed around the world fairly fast. By the time English speakers spotted the symbols for Cipangu on maps, they pronounced it Giapan, and here we are now. All that said, many Noritake pieces are stamped Hand Painted Nippon.

Other Noritake stamps you might see include the famous M mark from 1911, representing the Morimura brothers. It’s often framed in a wreath. Later in 1953, they changed the M to N for Noritake but kept the wreath. You might also see a Sometuke Bat or Maruki Tree stamp.

Backstamps and trademarks are precious reselling tools because they can confirm the date of the piece. And period authentication directly affects your asking price. For Noritakes, anything stamped Nippon is pre-1891. Anything with the N-wreath is likely to be post 1953.

After World War II, Noritake imports might be marked Occupied Japan, particularly from 1948 to 1953. The company preferred to stamp those pieces Rose China, letting the buyer know they were made of low-grade materials. Everything else went towards the war effort.

If you find a Noritake stamped with a bat, it may be from 1906. The stamp was a sign of good luck, and it may also be stamped Royal Sometuke Nippon. Sometuke is the word for blue. By 1908, they switched to the Maruki, a tree character (later a spear) inside a circle or square.

The tree was about facing tough times with grace, while the spear referenced the power to get past barriers and obstacles. Noritake still makes ceramics today, and post-1950 dinner sets may include salt and pepper shakers. Prioritize brightness and whiteness over stamp marks.

The most easily recognizable stamp is the word Noritake with a factory drawn above it. A piece stamped like this might also have the M-wreath and/or Hand Painted in Nippon. This symbol combination was used on porcelain produced from the early 1910s to the early 1920s.

But the Noritake logo has evolved with their maker’s marks, and there are tons of iterations. Check out the Noritake Collectors Guild Website or the book Early Noritake by Aimee Neff Alden. Both resources will help you identify Noritakes by checking the logos used that year.

Some of the oldest and most valuable vintage Noritake china patterns have the older factory name, Nippon Toki Kaisha, and are marked ‘bone china’. Others were stamped RC for Royal Crockery, implying the pieces were purely for export. Or you might see the rising sun stamp.

This stamp was a blue simulation of the traditional rising sun flag. Except the 16 rays were on a semicircular sun (the kind a child might draw) while the normal rising sun spreads the 16 rays around a full-circle sun. This mark aka the Pale Blue was used on exports from 1916.

Once in a while, you might see a pictorial logo with unfamiliar words. It may have a cherry blossom, a crown, a Japanese helmet, or the Maruki mark. These symbols may have Kokura or Chikaramachi on them. They aren’t fakes, they’re just rare, so have those pieces appraised.

But what if you see an alleged 1930s Noritake with Japanese characters instead of the marks we’ve discussed in this article? It just means the porcelain was for local sale within Japan, not export. The Nitto marks were typically framed inside a wreath, square, or double-square.

The techniques below can help you enhance your reselling results:

Any other advice on the most valuable vintage Noritake patterns? Tell us in the comments!